Hundreds of hidden nearby galaxies have been studied for the first time, shedding light on a mysterious gravitational anomaly dubbed the ‘Great Attractor.’

Despite being just 250 million light years from Earth, very close in astronomical terms, the new galaxies had been obscured from view until now by our own galaxy, the Milky Way.

Using CSIRO’s Parkes radio telescope equipped with an innovative multibeam receiver, an international team of scientists were able to see through the stars and dust of the Milky Way, into a previously unexplored region of space.

The discovery may help to explain the ‘Great Attractor’ region, which appears to be drawing the Milky Way and hundreds of thousands of other galaxies towards it with a gravitational force equivalent to a million billion Suns.

Lead author Professor Lister Staveley-Smith, from The University of Western Australia node of the International Centre for Radio Astronomy Research (ICRAR), said the team found 883 galaxies, a third of which had never been seen before.

“The Milky Way is very beautiful, and it’s very interesting to study our own galaxy, but it completely blocks out the stellar light from distant galaxies behind it,” he said.

Staveley-Smith said scientists have been trying to get to the bottom of the mysterious ‘Great Attractor’ since major deviations from universal expansion were first discovered in the 1970s and 1980s.

“We don’t actually understand what’s causing this gravitational acceleration on the Milky Way or where it’s coming from,” he said. “We know that in this region there are a few very large collections of galaxies we call clusters or superclusters, and our whole Milky Way is moving towards them at more than two million kilometres per hour.”

The research identified several new structures that could help to explain the movement of the Milky Way, including three galaxy concentrations (NW1, NW2 and NW3) and two new clusters (CW1 and CW2). 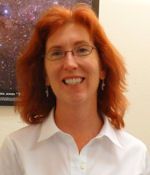 University of New Mexico Physics and Astronomy Professor Trish Henning played in a critical role in the mapping and discovery process of these hidden galaxies. Henning was responsible for examining over a thousand candidate signals provided by other researchers, and determined which signals were new galaxies and which ones were not.

“I have been doing this kind of work with many different telescopes for a long time, and so I have a very experienced eye as to what’s a galaxy and what’s not,” said Henning, who is also an associate chair of UNM’s Department of Physics and Astronomy.

She said this project has provided valuable experience for a number of graduate and undergraduate students throughout the years and has been a great benefit to the university.

Henning is now leading an extension of this project to look into another part of the sky. She is using the Arecibo telescope in Puerto Rico to look further north, and she said that project is on track to find several thousand new galaxies.

“We’re doing basic science and we’re asking fundamental questions about the universe, but there really is an excitement when you see a signal for the first time and you know that nobody’s ever seen that before. Each one is a galaxy that humankind hadn’t known about, and we’re the first to find it,” she said.

University of Cape Town astronomer Professor Renée Kraan-Korteweg said astronomers have been trying to map the galaxy distribution hidden behind the Milky Way for decades.

“We’ve used a range of techniques but only radio observations have really succeeded in allowing us to see through the thickest foreground layer of dust and stars,” said Kraan-Korteweg. “An average galaxy contains 100 billion stars, so finding hundreds of new galaxies hidden behind the Milky Way points to a lot of mass we didn't know about until now.”

Dr. Bärbel Koribalski from CSIRO Astronomy and Space Science said innovative technologies on the Parkes Radio telescope had made it possible to survey large areas of the sky very quickly.

“With the 21-cm multibeam receiver on Parkes we’re able to map the sky 13 times faster than we could before and make new discoveries at a much greater rate,” she said.

The original study involved researchers from Australia, South Africa, the US and the Netherlands, and was published today in the Astronomical Journal.