More and more as climate change increases temperatures globally and alters regional rainfall, scientists are finding that the activity and foraging behaviors of animals must also change in order to adapt to the ever-changing environmental conditions.

For example, ectotherms, like lizards, alter their daily behaviors according to daily temperature variation as they grow, reproduce and survive. But, as global and local mean temperatures increase lizards respond to the higher temperatures by decreasing daily activity and reducing foraging time, particularly in sunlit locations, to limit heat gain. The role of rainfall on lizard behavior has been little studied to date.

“While these behavioral changes at higher temperature are linked to population declines, little is known about how lizards will respond to decreases in rainfall in arid environments predicted to accompany warming,” said University of New Mexico Research Scientist Mason Ryan, lead author of the research titled, Too dry for lizards: short-term rainfall influence on lizard microhabitat use in an experimental rainfall manipulation within a piñon-juniper woodland, which was published recently in Functional Ecology.

“Moreover, tests of these responses are difficult in natural environments because experimental manipulations of temperature and rainfall are uncommon,” Ryan added.

To examine how wild lizards respond to changing temperature and rainfall, scientists, led by Ryan, measured lizard responses in a piñon-juniper woodland in New Mexico where rainfall and temperature were manipulated on 40x40 meter plots assigned to one of four treatments ranging from severe drought to above-average precipitation over a five-year period. 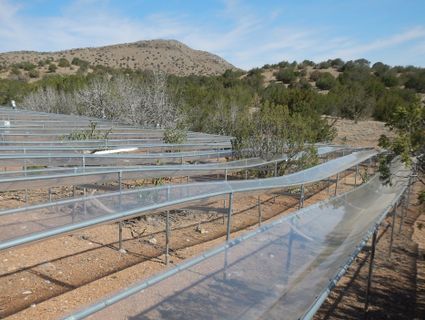 As part of the research, rainfall and temperature were manipulated on 40x40 meter plots assigned to one of four treatments ranging from severe drought to above-average precipitation over a five-year period.

The study species, a Chihuahuan Spotted Whiptail, is a thermo-regulator that shuttles between open and shaded microhabitats while actively foraging. Its daily activity requires considerable moisture. Previously, researchers found that moisture, not temperatures govern their daily activity, because lizards may expend up to 63 percent of their water mass while active.

Ryan’s experimental design allowed the scientists to relate microhabitat use to real-time sub-hourly temperatures and rainfall experienced by hydrically-sensitive free-living lizards, the first time to our knowledge this has been done.

Because high tree mortality and canopy dieback have been reported in this study system, the research suggests that the resulting reduction of tree shade may have a cascading effect on lizards’ ability to buffer against future climate change impacts in piñon pine-juniper woodlands.

“We observed lizards and recorded their activity and use of shade or sun microhabitats in the context of these treatments,” Ryan said. “This design allowed us to determine how rainfall and/or temperature influenced lizard activity and decisions about foraging in sun versus the shade of trees. Contrary to recent studies, we found that rainfall, not temperature, strongly influenced lizard behavior.”

During dry periods, the scientists found that lizards foraged almost exclusively in shade under trees, whereas lizards foraged in sunny areas across the landscape following natural or simulated rainfall events. Temperature did not influence lizard behavior, even in the covered plots with the warmest temperatures, a surprising result considering the wealth of research showing lizard temperature sensitivity.

“We found that our study lizard is more sensitive to moisture and relies on tree shade as a refuge during dry periods,” Ryan said. “The long-term drying trends that are increasing tree mortality in piñon-juniper woodlands may decrease the availability of this critical lizard microhabitat.