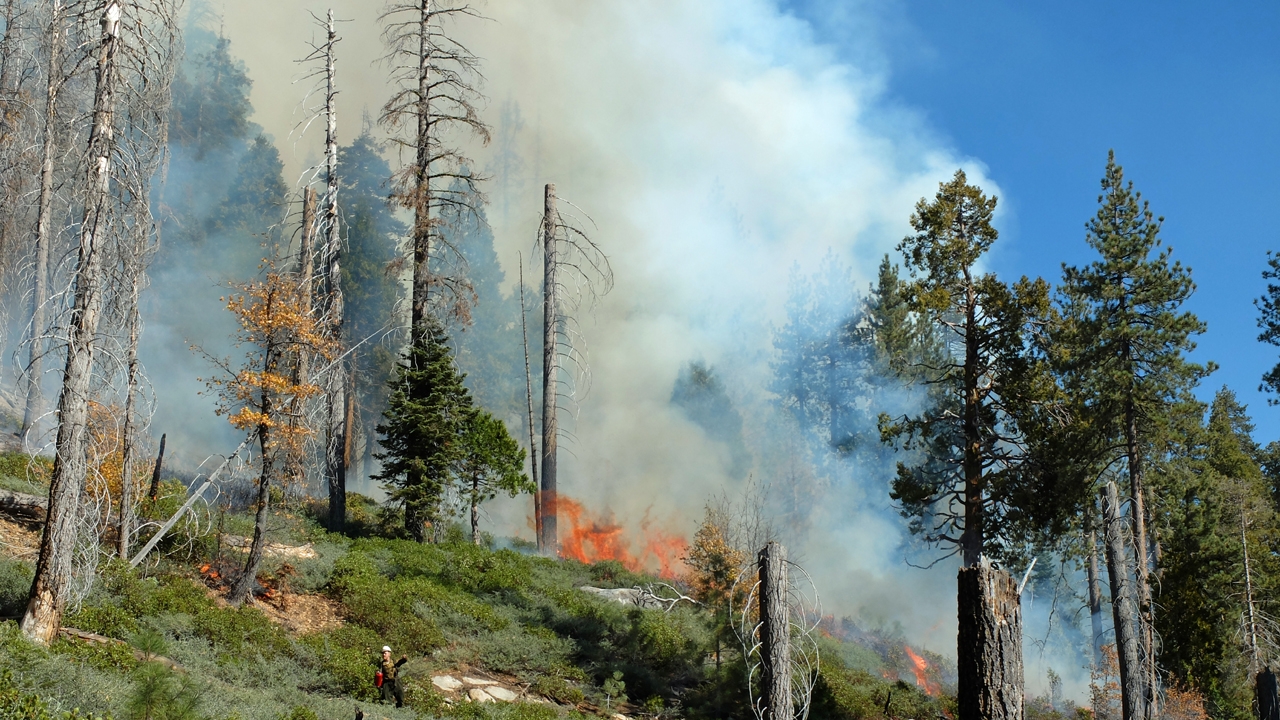 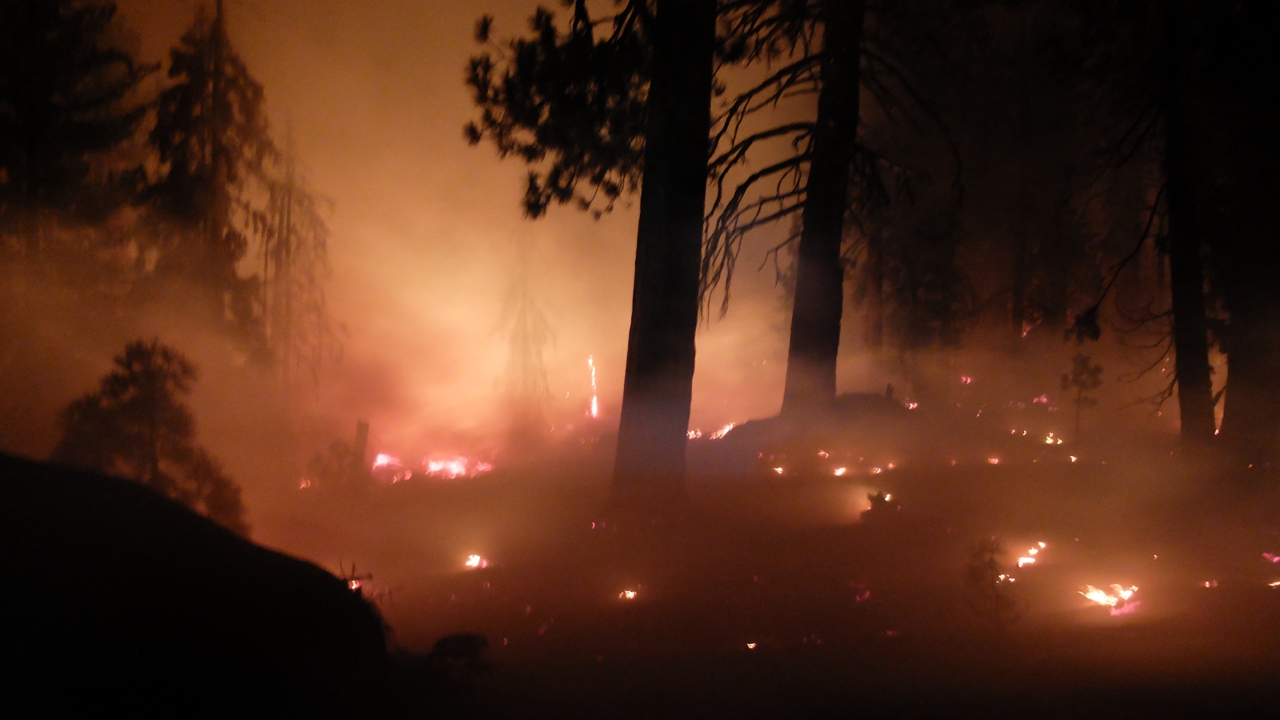 Climate change and wildfire – it’s a combustible mix with costly devastation and deadly consequences. With a goal of understanding the link between the two variables, researchers over the years have studied the effects of climate and wildfire interactions in the Sierra Nevada mountain range. That research has evolved into learning about the distribution of trees, the extent of forest cover and carbon dynamics.

However, most previous studies have looked at the relationship between climate change and area burned by wildfire as a result of climatic influences on wildfire. Fire is a self-limiting process influenced by productivity. Yet, many fire projections assume sufficient vegetation to support fire, with substantial implications for carbon dynamics and emissions.

Climate influences vegetation directly and through climate-mediated disturbance processes, such as wildfire. Typically, the amount of area burned and temperature are positively associated based on the availability of vegetation to burn. The interaction with vegetation, which provides the fuel for the fire to burn, hasn’t been studied in depth.

Now, scientists, including Matthew Hurteau in the Department of Biology at The University of New Mexico, are examining more data via simulations of wildfires in the Sierra Nevada to improve their understanding between prior and future wildfires. They hypothesized that prior wildfires and their influence on vegetation, coupled with a changing climate and its influence on vegetation recovery after a wildfire, would likely restrict the size of wildfires in the future.

“The benefit of our findings is more in terms of improving our understanding of the potential challenges that communities will face in the air sheds that are impacted when a wildfire burns in the Sierra Nevada.” – Matt Hurteau, associate professor, Department of Biology

The research titled "Vegetation-fire feedback reduces projected area burned under climate change,” was published today in Scientific Reports, and was conducted to better understand the climate-wildfire interaction and how that impacts wildfire emissions, and subsequently, air quality in the Sierra Nevada mountain range.

Using a landscape model that simulates forest and fire dynamics, Hurteau and his colleagues conducted simulations where climate was the only influence on area burned (static) and where the interaction of climate and prior fire events on both fuel flammability and availability influenced area burned (dynamic).

“Using an ecosystem model, that included photosynthesis and respiration, we were able to capture how the vegetation would respond to climate and area burned during each decade,” said Hurteau. “We used the ecosystem model output from each decade and a statistical model that accounted for the effects of prior area burned and climate to re-estimate fire size distributions for the subsequent decade and capture the effects of previous wildfires.” 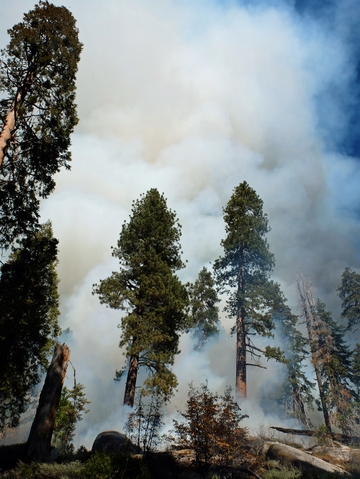 What they found was a little surprising. They had expected that prior fire events and their effect on the amount of fuel available to burn in the forest would impose a large constraint on future area burned. Scientists call it a fuel limitation effect from prior fire events, but they found that it doesn't last very long and it's not near as large as they had thought.

“We discovered that compared to the static scenarios, where climate is the only influence on area burned, accounting for the interaction of prior fires and climate on fuel availability and flammability moderates only reduces the cumulative area burned in the Sierra Nevada by about 7.5 percent over the course of this century. This is much lower than we anticipated because enough vegetation was able to recover following a fire that a burned area would be able to support a subsequent fire pretty quickly,” said Hurteau.

As part of the study, Christine Wiedinmyer, an atmospheric chemist and the associate director at the University of Colorado’s Science at Cooperative Institute for Research in Environmental Sciences, built upon the work of Hurteau and others to take it to the level of air pollutant emissions by looking at the smoke release from wildfires in different climates with different types of vegetation.

Wiedinmyer utilized the information from the other researchers to determine how the changes in the amount of vegetation burned impacts the number of air pollutants emitted from the wildfire smoke. The inclusion of the new vegetation dynamics changed the estimates of wildfire pollutant emissions – which can ultimately impact air quality. The ability to acquire more detailed predictions of vegetation/wildfire/emissions will enable air quality managers to have better predictions of wildfire air quality impacts into the future.

“This study revealed that wildfire activity is impacted not only by climate, but also by vegetation and prior fires,” said Wiedinmyer. “When you include all of these components in predictions of wildfire — it can change our predictions of the air pollutants from wildfires. This is important because that information can help air quality managers know what to expect and how to plan for it.”

“The benefit of our findings is more in terms of improving our understanding of the potential challenges that communities will face in the air sheds that are impacted when a wildfire burns in the Sierra Nevada,” said Hurteau. “It's also beneficial for policy planning. From a management planning perspective, this work basically shows us the effects of one of those prior fire events are only influential for about a decade, and that there's enough vegetation regrowth in the footprint of a wildfire that occurred within 10 years that can carry fire again.”

Hurteau noted California's climate action plan is dependent on continued carbon uptake by natural vegetation systems in the state to help balance human-caused carbon dioxide emissions. “This helps constrain some of the uncertainty around future wildfire and how it'll impact carbon uptake by the forest,” he said.

“We were able to look at wildfire on a new level of detail and work collaboratively to get a bigger picture about how wildfire behaves in different conditions,” added Wiedinmyer.