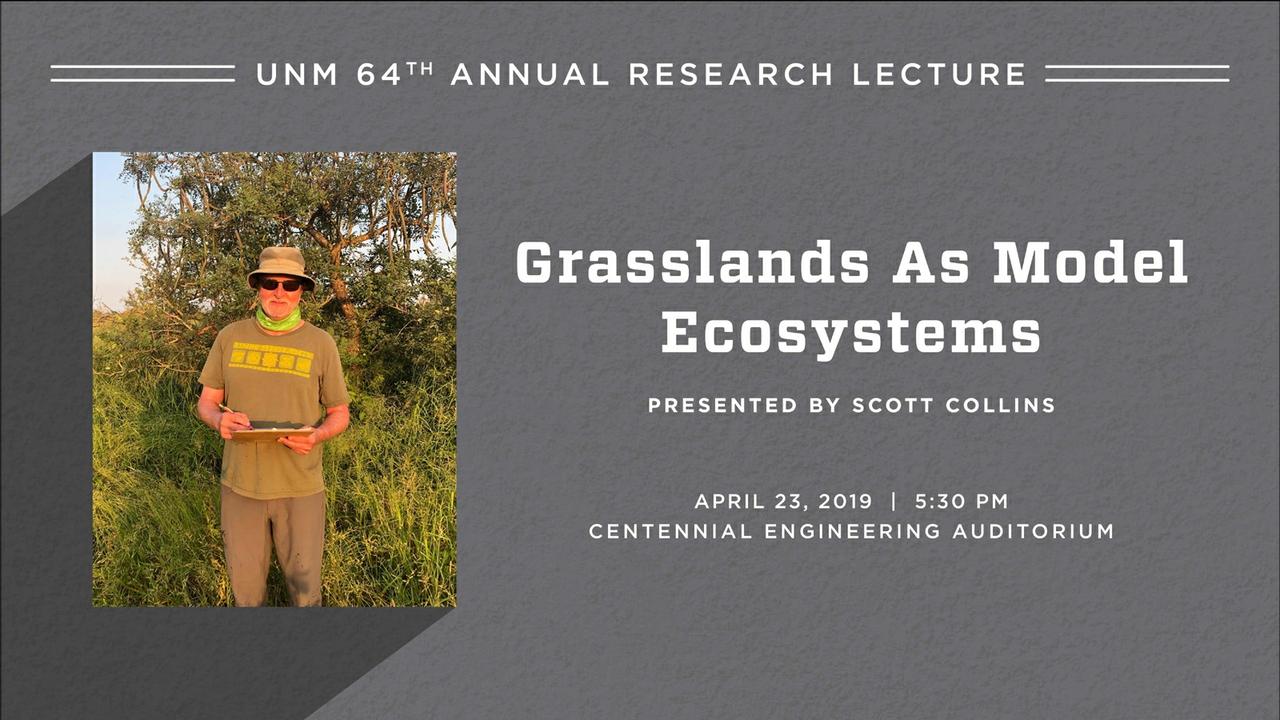 For decades, Scott Collins has studied the impacts of natural disturbances and environmental change on grasslands in North America and South Africa to learn how rainfall variability, temperature changes and shrub encroachment affect these globally important ecosystems.

Collins, a distinguished professor in the Department of Biology at The University of New Mexico, is one of the country’s leading Ecologists and one of the primary reasons UNM maintains a national and international reputation in the field of ecology. An internationally recognized ecologist, Collins has a long record of scholarly publication, research funding and mentoring of undergraduates, graduate students, postdoctoral scientists and young faculty.

His research interests stretch from plant community dynamics; gradient models and structure; the role of disturbance in communities; fire ecology; patch dynamics; landscape ecology; grassland ecology; and analysis of species distribution and abundance. Collins, who is also the Loren Potter Endowed Chair of Plant Ecology in the Biology Department, has made contributions in three key areas including the community ecology of grasslands, the responses of arid land ecosystems to climate variability and change, and the development of long-term ecological research.

“It is an amazing and genuinely unexpected honor to receive this award from UNM for doing the things that I love doing.”  – Distinguished Professor of Biology Scott Collins

Specific research projects have ranged from studies of extreme drought and precipitation variability in grasslands, to ecological restoration, to convergence and contingencies in savanna grasslands in North America and South Africa, all designed to better understand mesic and arid grassland ecosystems, and how they will respond to future climate change.

Now, Collins is being recognized as UNM’s 64th Annual Research Lecture recipient, a selection made by the UNM Research Policy Committee and through nominations from peers across the United States and abroad. The Annual Research Lecture, presented by the Office of the Vice President for Research, was established in 1954, and is one of the highest honors the University bestows on its faculty in recognition of research and creative activity.

“It is an amazing and genuinely unexpected honor to receive this award from UNM for doing the things that I love doing,” said Collins. “After 10 years working at the National Science Foundation in Arlington (Va.), I realized that I wanted to return to academic life, and UNM gave me that opportunity. I truly enjoy teaching, research and mentoring students.”

“I am surrounded by wonderful, collaborative and inspiring colleagues in the Department of Biology at UNM. “Of course, this award also belongs to my many collaborators and current and former students who have been a pleasure to work with over the years.”

“Grasslands cover over a third of terrestrial environments and are important both ecologically and economically,” said Collins. “I look forward to presenting some of the research I’ve had the privilege of doing over the years on grassland biodiversity, conservation and management.”

During his tenure at NSF, Collins was the first program officer for the National Ecological Observing Network (NEON), which began its development during his tenure and matured has matured into a $65 million/year program that recently began data collection in key ecosystems across the continent to provide long-term, methodologically consistent measurements of change as an indicator of the effects of climate change over the next 30 years.

Collins’ research only tells part of his story. His scholarly contributions demonstrate sustained and significant research productivity in aspects of ecology. With more than 220 peer-reviewed publications, including 143 since arriving at UNM in 2003, place him among UNM’s most productive and most-cited faculty. Using Google Scholar for UNM faculty affiliation, Collins is in the top-125 active faculty members in the field of ecology worldwide, an impressive feat under any circumstances considering the Ecological Society of America alone has more than 10,000 members.

In addition, his funding at UNM since 2004 as a principal investigator or Co-PI is nearly $19.5 million in research grants including programs such as the National Science Foundation’s Sevilleta Long Term Ecological Research in central New Mexico, individual research grants from the NSF and Department of Energy and training grants for undergraduates including the NSF Research Experiences for Undergraduates (REU) program as well as graduate students in the NSF GK-12 training program.

Collins has also been recognized amongst several organizations including: an Elected Fellow in the American Association for the Advancement of Science (2012); several leadership roles in the Ecological Society of America (ESA) including President, Vice President for Public Affairs and Chair of the publications committee overseeing a number of field-leading journals. Recently, he was also awarded the Distinguished Service Citation of the ESA, which acknowledged his many contributions to the large and diverse society.

For more information on Collins and his research, visit The Collins Lab.

For more information on the ALR and list of past winners, visit Annual Research Lecture.