The University of New Mexico has announced the departure of Patrick Valdez, chancellor of the UNM Taos Branch Campus.

In 2017, Valdez was named Chief Executive Officer (CEO) of the UNM Taos Branch Campus, after leaving the College of Mount Saint Vincent in New York City. 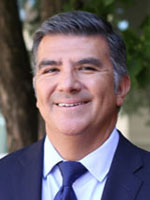 “​​Dr. Valdez has been a transformative force at UNM Taos, and an active participant in wider UNM efforts, including serving as the branch representative on the UNM Grand Challenges Steering Committee,” said James Holloway, UNM Provost & Executive Vice President for Academic Affairs. “We will greatly miss Patrick and his creative approach to branch challenges, his intelligence, his devotion to service and his excellent sense of humor.”

Valdez will assume the role of vice president for Program Strategy at 2U, a tech-based educational service provider based in Maryland.

While continuing her role as chancellor of the UNM Los Alamos Branch Campus, Cindy Rooney, will serve as interim. A search for a new chancellor at UNM Taos will begin immediately, with a search advisory committee chaired by Chancellor James Malm of the UNM Gallup Branch Campus.

The committee is still being identified; any recommendations should be emailed to Holloway.