Rio better be ready: The Lobos are bringing a pack to this year's Olympics.

Six University of New Mexico alumni and one head coach are competing against the world's best on the biggest international stage as they head to the 2016 Summer Olympic Games in Rio de Janeiro.

Dyche, who is entering her second year at the helm of Lobo women's soccer, saw the first action of the Olympics, when the U.S. opened group play with a 2-0 victory over New Zealand on Wednesday , Aug. 3 at Mineirão Stadium in Belo Horizonte.

The U.S. will also take on France on Aug. 6 and Colombia on Aug. 9 in group play. Bracket play starts Friday, Aug. 12 with the quarterfinals round, with the semifinals on Tuesday, Aug. 16 and the medal games on Friday, Aug. 19.

Bairstow, who was named as Second Team All-American by Sports Illustrated after capping a UNM career in which he scored 1,239 points, makes his Olympic debut with Australia on Saturday, Aug. 6.

Australia will take on five games in group play at Carioca Arena 1 in Rio de Janeiro. Australia opens with France at 11:15 a.m. MT on Aug. 6, followed by Serbia on Monday, Aug. 8; the United States on Wednesday, Aug. 10; China on Friday, Aug. 12; and Venezuela on Sunday, Aug. 14.

The quarterfinals start Wednesday, Aug. 17, with the semifinals on Friday, Aug. 19 and the medal games on Sunday, Aug. 21.

Green, who was a three-time All-American selection and a member of the prestigious All-Nicklaus team in 2015 for the Lobos, opens the first of four rounds of golf on Thursday, Aug. 11.

A native of Kuala Lumpur, Malaysia, Green will play all four round on successive days, finishing with the medal round on Sunday, Aug. 14.

Lobo track & field has a large contingent of athletes competing at Olympic Stadium in Rio de Janeiro, including one NCAA championship and a defending Olympic bronze medalist.

Frerichs, the 2016 NCAA champion and NCAA record holder in the 3,000-meter steeplechase, competes in the preliminary round of her speciality on Saturday, Aug. 13 at 7:05 p.m. MT.

In a year in which she's won two NCAA titles — one with the Lobo women's cross country team and once individually in the steeplechase — Frerichs has a shot to continue her stellar campaign.

Solomon, an All-American for New Mexico in the 400-meter dash, has already competed in the Olympics, earning bronze in the 4x400 meter relay for Trinidad and Tobago at the 2012 Olympic Games in London.

Former UNM student Jillion Potter will be playing rugby for the United States. The U.S. was one of 12 countries to qualify for the rugby sevens tournament. It's the first time the sport has been a part of the Olympics since 1924 when rugby 15s was last played. Potter, the U.S. rugby captain, has overcome cancer and a broken neck to compete in the sport she loves.

Potter began playing rugby when a college friend at The University of New Mexico convinced her to give it a try. Six months later she was selected to the Women’s Junior All-Americans. She continued through the High Performance Development Pathway until making her Women’s Eagles debut in 2007. 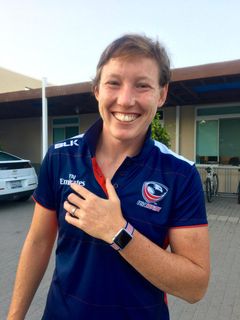 Jillion Potter began her rugby career at UNM after a friend convinced her to give the sport a try.
In 2010, she had had a brush with a potentially career-ending and life-threatening injury. She was tackled and landed at the bottom of a pile of players in a match with France. She shattered her vertebra and tore ligaments and narrowly avoided being paralyzed.
Potter eventually returned to the pitch and won bronze with the Women’s Eagles Sevens at Rugby World Cup Sevens 2013 in Moscow, Russia, and represented the Eagles at Women's Rugby World Cup 2014 in France. Tragedy struck again when Potter missed the 2014-15 Women's Sevens Series due to being diagnosed with stage III synovial sarcoma in the fall of 2014.
She beat the illness and returned to the Olympic Training Center ahead of the 2015-16 Series. Playing in 22 of the team's 29 matches, Potter worked her way back into the starting role she held before her absence, and was named to the 12-player Team USA squad for Rugby Sevens' debut at the Rio 2016 Olympic Summer Games.
Pool play rugby competition begins Saturday, Aug. 6.
Tags: Jillion Potter Cameron Bairstow Gavin Green Courtney Frerichs Jarrin Solomon Ross Millington Heather Dyche