A new study examining how 28 of Alaska’s mammal species will respond to future climate warming was released recently by the U.S. Geological Survey.  Information for the study, conducted by several University of New Mexico alumni, was gathered using field research coupled with genetic analyses to determine how mammals responded to past climate changes.

“Resident small mammal species such as shrews and voles and larger species like wolverine and marmots have been in Alaska for many thousands of years and have responded to past climate cycles just as they are responding to the current warming trend,” said Andrew Hope, lead author of the study and researcher with Kansas State University.  Hope, who earned his Ph.D. in 2013 from UNM, conducted the research as a post-doctoral fellow at the U.S. Geological Survey Alaska Science Center.

“Since these mammals experienced past climate cycles, we were able to interpret signatures of population level responses to those climate events recorded in their DNA, and then also use that information to predict likely shifts in animal distributions throughout Alaska into the future,” said Hope.

The researchers assembled species distribution models for each of the 28 species, showing where species are found today, based on specimen locality records, where they were likely distributed in the past, based models of past climatic records and taking into consideration available fossil records, and where they will likely be found in 2050 and 2070, based on predictive climatic models calibrated using current species distributions and genetic information. 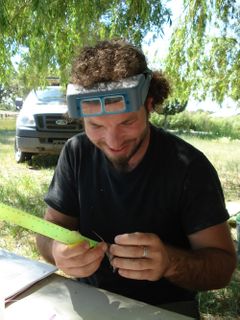 Hope worked on the project with researchers from the USGS, the U.S. Fish and Wildlife Service’s Arctic National Wildlife Refuge, the City College of New York, the University of Nevada-Reno (Jason Malaney, Ph.D. 2013, UNM), and UNM Professor of Biology Joseph Cook. Cook is also the director of UNM's Museum of Southwestern Biology.  The study leveraged genetic data collected over the past several decades in multiple laboratories.

“This approach allowed us to examine the consistency among predicted changes to distributions and determine whether there are differences in management implications across regions" said David Payer, chair of the Arctic Landscape Conservation Cooperative and a co-author of the study.

The study found that future refugia for Arctic biodiversity of tundra associated mammals will be concentrated in northern areas such as the Arctic National Wildlife Refuge and the National Petroleum Reserve of Alaska. Boreal-associated species exhibit a significant northward shift into tundra habitats where they are currently absent.

The study was published in the journal Ecosphere and builds on their earlier work published in Nature Climate Change in 2013.