UNM took the traditional homecoming dance to a whole new level with the introduction of Silent Lights, a silent disco on Smith Plaza.

The rain didn’t keep the crowd away on Thursday night. By 8 p.m. a line of curious and excited students formed around the plaza. Many of them had never participated in a silent disco and couldn’t wait to experience the trend that is sweeping across Europe.

A silent disco is an event where people dance to music listened to on wireless headphones rather than using a speaker system. Thursday’s event became the largest of its kind produced in the state due to the five-story visual projection experience accompanying three different DJs, playing three different types of music: Top 40, LA Beats/Brazilin Funk and Electric Dance Music (EDM).

The headphones lit up either red, blue or green to show other party-goers what type of music was being played. Students could change the music they were listening to by the simple press of a button.

The Associated Students of UNM, Lobo Spirit and Student Special Events partnered with University Communication and Marketing (UCAM) to bring this event to campus as part of Homecoming 2016.

“This is the best turnout we have ever had for a first-time ASUNM sponsored event,” said Kyle Beiderwolf, president of ASUNM. “It was an unbelievable experience—so much fun. Everyone definitely wants this to be an annual event.”

Close to 2,000 students danced in awe while projections played on the five-story Humanities building. The projections included a kaleidoscope of animations and designs that matched the tempo of the different music genres. Twice during the night participants were also given the opportunity to see a newly branded video that highlights living the Lobo life.

“What’s really exciting about this experience is that it truly reflected the 'Each of us defines all of us' brand, said Cinnamon Blair, Chief UNM Marketing & Communications Officer. “The projections were created by Nat Gutierrez, a student in our office. He took his individual talents and used them to help define UNM through this memorable event.”

The music mirrored the lights just before midnight. As students turned in their headphones, volunteers were thanked profusely for throwing what one student called, “The best event UNM has ever put on.” 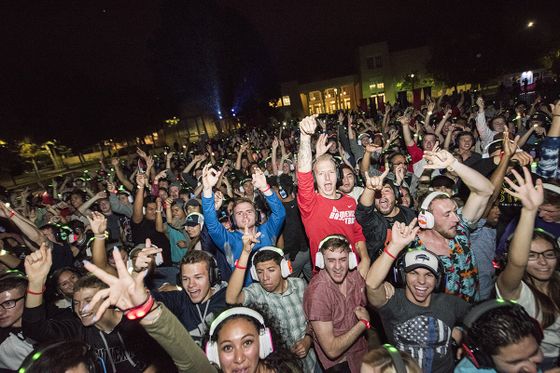