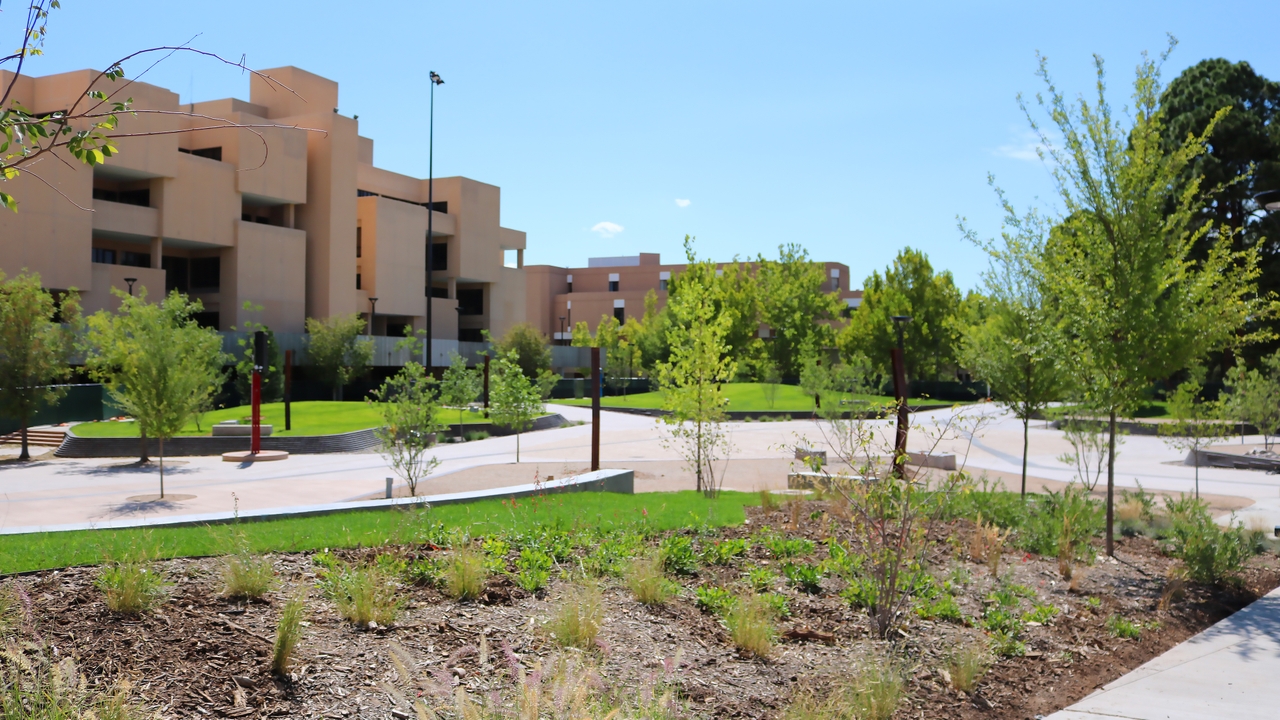 ‘Heart of UNM’ reopens with celebration
August 27, 2018
Categories: Inside UNM

Smith Plaza, the center and heart of main campus at The University of New Mexico, has reopened after undergoing a major renovation completed by Jaynes Corporation. The design team included MRWM Landscape Architects, McClain +Yu Architects and Surface Design, Inc.

To celebrate the completion of the project, the public is invited to an official ribbon-cutting ceremony on Wednesday, Aug. 29 at 10 a.m. on the Plaza.

It’s estimated that 10,000 students travel through Smith Plaza every day.  The once mostly concrete plaza has been, “Transformed into a vibrant, safe, accessible, and comfortable ‘great room’ environment that will host academic and social activities throughout the year,” said Kim Kloeppel, UNM’s chief operations officer for Student Affairs. “The renovation now has plateaus and landings with trees, grass, and many areas for students to sit, study, and socialize.”

Nusenda Credit Union, a long-time partner with the University, is sponsoring the “Nusenda Lobo Landing” area, just north of the Student Union Building. The space includes a small amphitheater and donor recognition wall.

“Nusenda’s roots are in education— we’ve been partners with UNM and its student body for four decades, almost half of our years in existence,” said Nusenda Credit Union President/CEO Terry Laudick. “UNM is an integral part of our hometown of Albuquerque and the state of New Mexico, both for student success and economic development. We’re excited to provide a hallmark space for students, staff, and visitors.”

The 3.3-acre Smith Plaza was renovated with an initial budget of $3 million from 2016 and 2017 Institutional Bonds.

“Student fees and private donors were part of the funding for this renovation,” Kloeppel says. “Nusenda Credit Union’s contribution helped create the new Nusenda Lobo Landing, which we envision as a great place for students and the UNM community to gather. We are very grateful for the support from Nusenda for the Smith Plaza project and UNM.”

The plaza renovation also honors Ferrel Heady, who served as president of UNM from 1968–1975, with a plaque. Heady was at the helm when universities across the nation were seeing Vietnam war, civil rights, academic, and freedom protests; and is credited with protecting both the educational mission of the University while maintaining the rights of protest, advocacy and dissent.