Teachers, principals often spend own money to help impoverished children
By Mara Kerkez May 07, 2015
Categories: Inside UNM College of Education

Not many people can say they’ve been up close and personal with Ellen DeGeneres. But University of New Mexico alumna Sonya Romero can. DeGeneres invited the kindergarten teacher, known for her “big heart,” to the show after hearing about her work with and for underprivileged students, a group that teachers claim is on the rise.

Romero was cast in the spotlight earlier this year when the Washington Post featured her in a story on poverty in public schools. The article created a ripple effect. KOB-TV’s “Pay it Forward” came to Lew Wallace Elementary School, where Romero teaches, and surprised her with $400, a thank you for helping make New Mexico a better place to live. The Albuquerque Journal and local news broadcasts picked up on her story, as did numerous online publications.

But the real surprise came when a producer from the Ellen DeGeneres Show, who had read about Romero in the Washington Post article, called and invited her to the Los Angeles set.

“I was in L.A. already when the producer called and said that First Lady Michelle Obama was in town and agreed to be on the show,” Romero said. “Because of tight security, I wouldn’t be able to attend. They apologized and said they wanted to make it up to me by offering to fly me out again the following week.”

But a ruse was afoot. While Romero was in California, the producers had sent a camera crew to Lew Wallace Elementary to interview her students and co-workers.

“My 15 minutes of fame have afforded me the opportunity to share my story, a story similar to so many other teachers across the country. Schools and teachers are not being provided the resources to educate the growing population of low-income students today." – UNM alumna Sonya Romero

Front and center
The following week, Romero was back in L.A. seated in The Ellen Show audience with her 14 year old son, Blaine, when DeGeneres surprised her by calling her to the stage. She asked the school teacher how she begins her classes each day. Romero said, “I ask the kids if they've eaten, and if they need anything to wear.”

According to a 2013 Hunger in our Schools survey by Share Our Strength, 73 percent of educators teach students who regularly come to school hungry. Half say hunger in the classroom is a serious issue, a detriment to learning. Not surprisingly, teachers and principals often spend their own money to help these children, and that’s on top of the $1.6 billion out-of-pocket they spend on classroom supplies annually.

Tears started flowing all around when DeGeneres played the Lew Wallace video montage showing Romero's students and co-workers thanking her for all she does.

One of the students said, “I want to be like her when I grow up. I want to be able to make everyone feel equal, and that they all have a part in the world, and can make it a better place.”

Romero tried to remain composed on live TV, but when DeGeneres presented her with two checks from giant retailer, Target, the humble kindergarten teacher from Albuquerque couldn’t contain her joy. Both checks were in the amount of $10,000: one for herself, the other for Lew Wallace Elementary School.

On teachers and teaching
“I’m incredibly grateful to Target for their generosity, and to Ellen and all the other people who reached out to me and Lew Wallace Elementary,” Romero said. “My 15 minutes of fame have afforded me the opportunity to share my story, a story similar to so many other teachers across the country. Schools and teachers are not being provided the resources to educate the growing population of low-income students today."

Romero, vice-president of the Albuquerque Federation of Teachers, added that it is becoming increasingly more difficult on teachers. “We rely heavily on public support. Donate to your local schools. Speak up; be a voice for the children. Vote. And know who and what you are voting for,” she said. 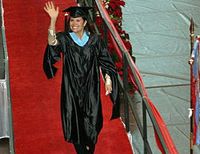 Romero received her master's from UNM in 2004.

Romero graduated from UNM in 1997 with a Bachelor’s degree in Communication & Journalism. She got a second bachelor’s degree, this one in education, from the College of Santa Fe. She returned to UNM in 2004 to obtain her master’s, and participated in the now discontinued Graduated Teacher Enhancement Program, a collaboration between UNM and APS that was facilitated through the College of Education. She is pursuing her Ph.D. in fall.

“I had really great teachers at UNM. Aside from the solid curriculum, they were mindful about getting us to understand how to cultivate the best in every child, and to remind ourselves daily that we are a tremendous influence in their lives. That was and still is very powerful to me as a teacher,” she said.

In a recent development, DeGeneres, via film crew, made a follow up visit to Lew Wallace Elementary and surprised Romero with a 2015 SUV donated by the Ford Motor Company, and DeGeneres’ guest that day, Sean John Combs (“P. Diddy”), offered to pay for the first two years of gas. Additionally, Shutterfly, an online image publishing service, gifted Lew Wallace $10,000.

DeGeneres said the YouTube video of Romero has been “viewed millions of times and has had a major impact on a lot of people.”