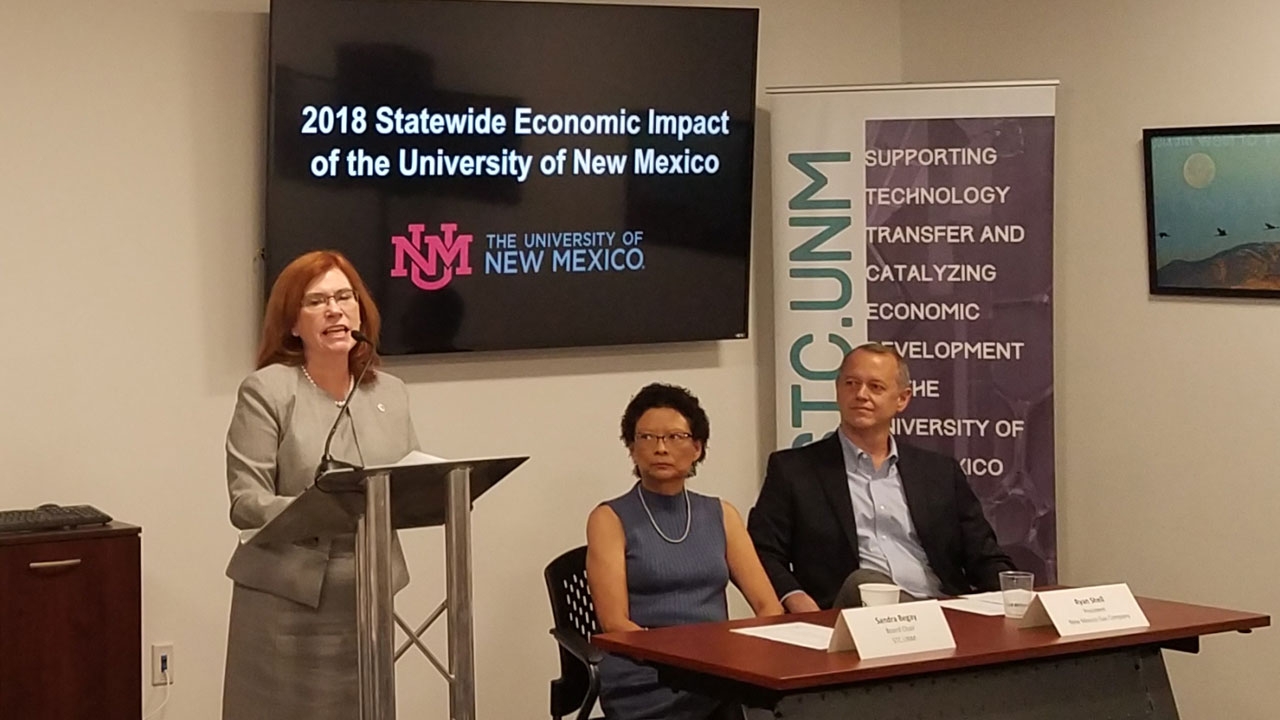 A recently completed report of The University of New Mexico’s economic impact on the state of New Mexico reveals that one of its major employers is a significant contributor to the state’s economy.

The study, made possible by support from the New Mexico Gas Company, an Emera Company, was commissioned by STC.UNM (STC), the University’s technology-transfer and economic-development organization. Dr. Kelly O’Donnell, research assistant professor in the UNM School of Public Administration, prepared the report. O’Donnell’s expertise focuses on research and analysis of local and regional economic development and economic impact.

The new study is the first of its kind to quantify the economic contributions of the entire UNM system—comprised of main campus, health sciences campus (medical school, cancer center, hospitals, medical group), and four branch campuses. The study also includes the impact on economic productivity of UNM alumni.

“Research universities are big economic drivers for their communities,” stated UNM President Garnett Stokes.  “The learning and discovery missions that are central to these institutions are interconnected to the mission to drive economic and social prosperity. This report clearly shows that UNM is making a large economic contribution to our state.”

STC CEO Lisa Kuuttila added, “In addition to the economic impact of university operations, student expenditures and alumni human capital, the University has made great strides over the last several years in the area of entrepreneurship and innovation. We are a core component of New Mexico’s innovation ecosystem and an economic driver of high-tech industry in the state.”

The study used an input-output (I-O) analysis methodology, which is based on the theory that regional economies are composed of households, industries, and institutions. Each of these sectors purchases outputs and supplies inputs to the other sectors in an interdependent, complex system, or network. When there is a change in the network, for example in employment, income or productivity in one sector, other sectors connected to it will feel the impact.

Although the impact report focused on how UNM contributes to jobs creation, higher salaries, and workforce productivity in the state, other UNM benefits that improve quality of life could not be measured and monetized. For example, tourism-related activities generated from live performances at Popejoy Hall, lectures, academic conferences and athletic events that attract out-of-state visitors could not be captured with currently available data.

Community service activities and programs offered through UNM that add a great deal to the New Mexico economy, such as law clinics, healthcare clinics and access to art and culture, also could not be measured because UNM currently has no centralized inventory system and no uniform way to assess impact from such a diverse array of offerings. Other benefits to the community from an educated workforce, such as better health outcomes, greater social inclusiveness and civic engagement, and a lower crime rate, were outside the scope of this study, but no less important.