The  team excavated the remaining deposits in the area where 19,000 year-old human remains had been found in 2010-11 and found about 10 more hand and  foot bones from the adult woman whose bones and jaw had been collected by her band or family members after flesh decomposition, then stained with red ochre and reburied during the Lower Magdalenian period.  A milk tooth of a second individual (a child) was also found, along with thousands of stone artifacts and bones of red deer, ibex and fish, plus several antler points, bone needles, and beads made of perforated marine shells and animal teeth.

Fontes was in charge of data recording and management, Kieffer worked as the on-site bioarcheologist and Shannon, who just graduated from UNM, was the lab supervisor. Fontes has remained in Santander, Spain, where, with a National Science Foundation (NSF) Doctoral Dissertation Improvement Award, she is conducting detailed technological analyses of Lower Magdalenian stone artifact collections from El Mirón and several other contemporaneous sites from Cantabrian Spain—including Altamira.

Kieffer, an expert speleologist and specialist in Maya cave burials, is back at work on her dissertation study of the remains of some 100 humans who seem to have been sacrificed in Midnight Terror Cave in Belize.  Landry, a veteran of fieldwork at Chaco Canyon with UNM professors Patricia Crown and Wirt Wills and other archeological projects, is beginning her master’s program in Public Archeology at Northern Arizona University.

Prof. Svante Paabo’s team at the Max Planck Institute of Evolutionary Anthropology in Leipzig, Germany, is currently attempting to extract nuclear DNA from phalanges of the “Red Lady of El Mirón”, having successfully obtained and analyzed the mitochondrial DNA.

For 38 years, Straus the long-time Editor of UNM’s “Journal of Anthropological Research,” has been taking UNM students to work with students from around the world on his Stone Age excavations in Europe.   Since 1996, he has been digging El Mirón Cave in Cantabria, Spain, with levels that range in age from the Mousterian (41,000 years ago—the time of the last Neanderthals) to the Bronze Age (3500 years ago).  UNM students have participated in every field season.

Straus began his lifelong love of archeological fieldwork at the age of 14—50 years ago—and has been actively doing research in western Atlantic Europe for over 40 years.   The latest El Mirón Cave publication has just come out in Molecular Ecology (lead author: Meirav Meiri, Tel Aviv University); it is a study of red deer (elk) DNA , demonstrating (as with an earlier article on salmon DNA in the same journal) that Cantabrian Spain was a refugium  for this species during the height of the Last Ice Age.   The DNA study of the Red Lady will help test the hypothesis that the repopulation of northwestern Europe after the Last Glacial Maximum by humans also stemmed from an Iberian refugium.

The 2013 campaign in El Mirón was financed by the Cantabrian Regional Government and by the Stone Age Research Fund, whose principal donors are Jean and Ray Auel.  Contributions to the fund at the UNM Foundation will help support the years of analyses that lie ahead for the project. 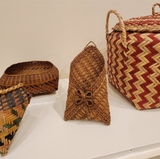