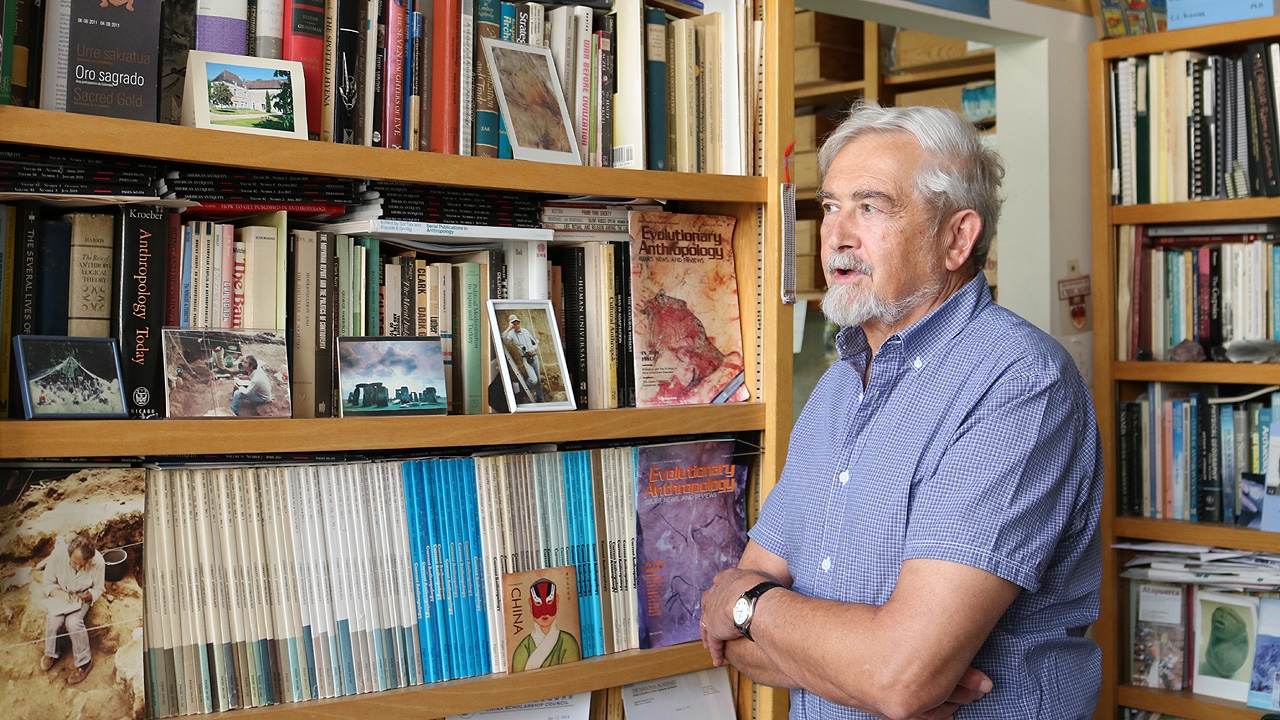 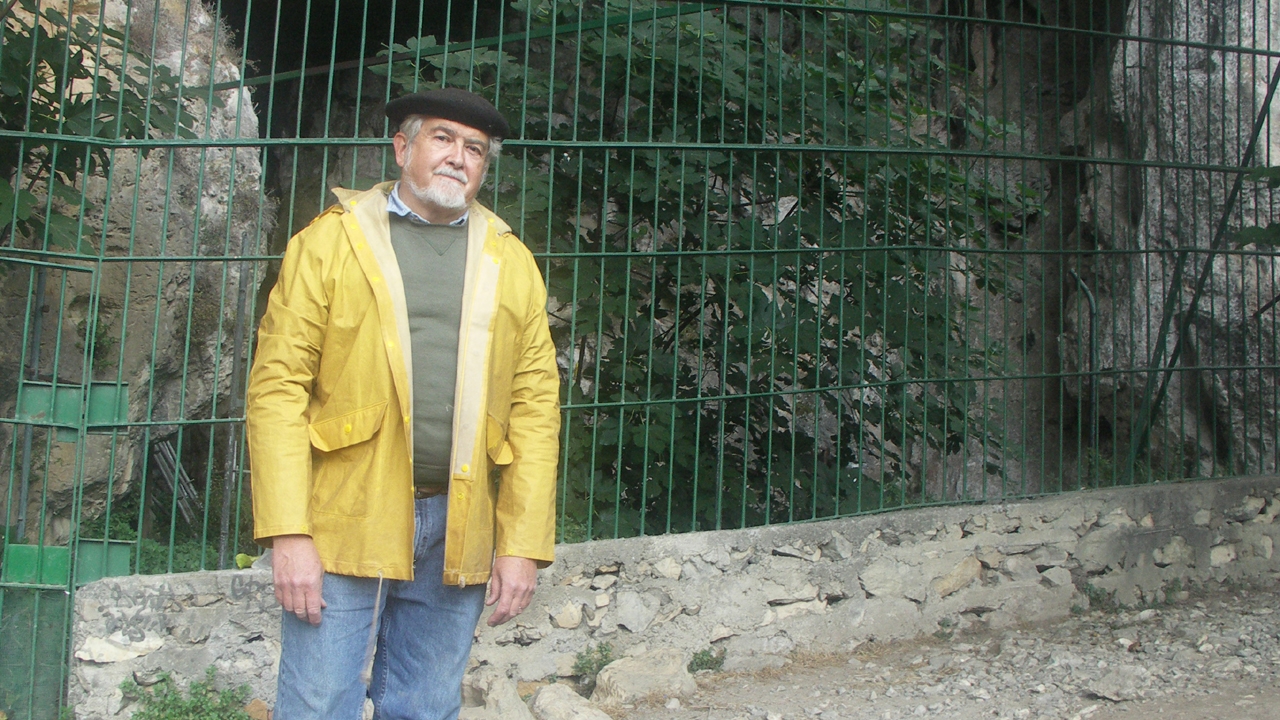 Lawrence Straus outside of the site of his

discovery of the Red Lady of El Mirón. 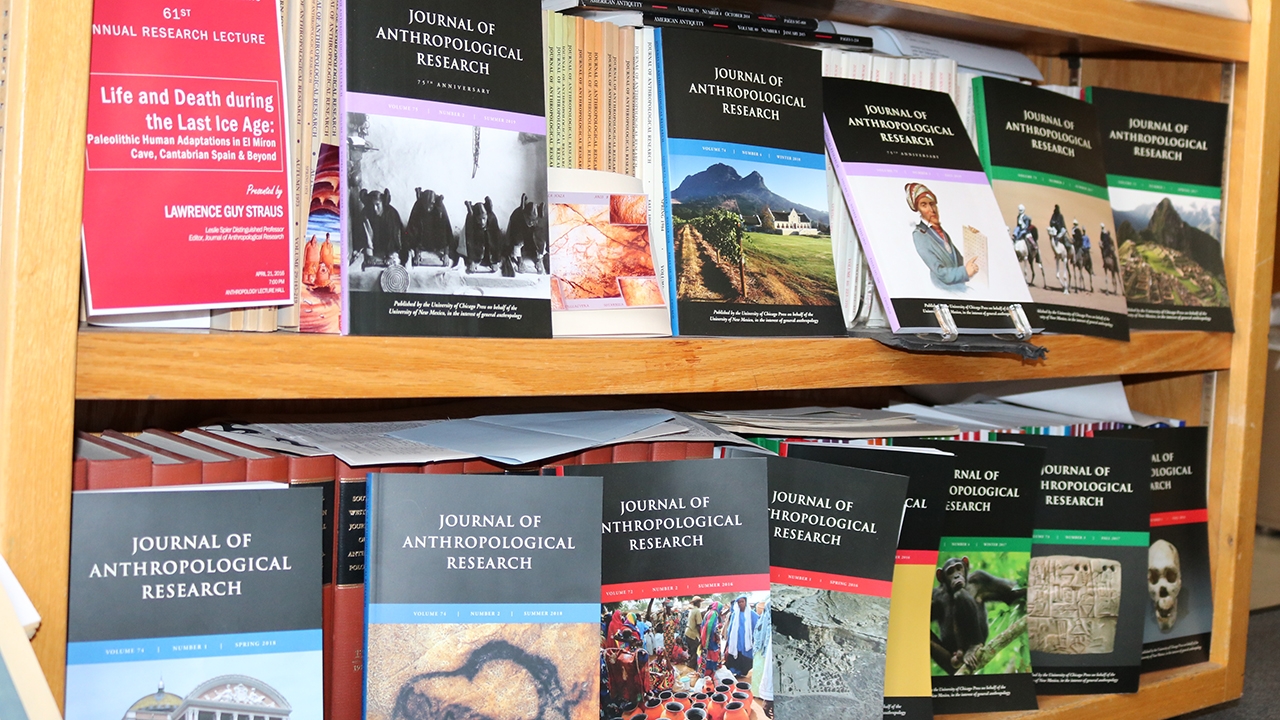 UNM Distinguished Professor Lawrence Straus has served as editor of the Journal of Anthropological Rsearch for 25 years and is the longest-serving editor in JAR's history.
Credit: Steve Carr

Straus recognized by former students for decades of anthropological discoveries

It’s fair to say that Lawrence Straus has made his mark in the anthropological world with his share of incredible discoveries during an illustrious academic career spanning nearly five decades. For Straus, that curiosity began at an early in his life when he started “digging” at age 14 in Portsmouth, N.H.

Straus had heard that there had been stone slab sidewalks from Colonial times buried in Portsmouth. So, he dug and actually uncovered one, making it into the local newspaper. Although he never knew them, Straus’ grandfather and great grandfather were amateur prehistorians in SW France, so perhaps he inherited his explorative mind from them, as well as from his physician father and biologist mother, whose  doctorate was from the Pasteur Institute and Sorbonne.

“It was a big deal back then,” said Straus, a Leslie Spier Distinguished Professor Emeritus in the Department of Anthropology at The University of New Mexico. Since then, his research in the anthropological world has only been equaled by his work as an advisor, mentor and professor to thousands of students during the course of his incredible 44-year career at UNM including three years as a working retiree, the longest by far of any faculty member in the 90-year history of the Anthropology department at UNM. 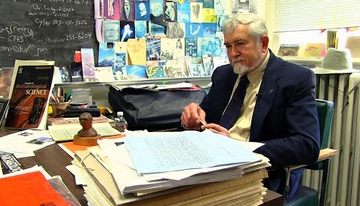 In 2016, Lawrence Straus presented the 61st Annual Research Lecture, one of the highest honors The University of New Mexico bestows on its faculty. His lecture focused on "Life and Death during the Last Ice Age: Paleolithic Human Adaptations in El Miron Cave, Cantabrian Spain and Beyond."

Now, a group of former students and colleagues has honored Straus with a Festschrift, a collection of articles titled, Recent advances in quaternary prehistory: Papers in honor of Lawrence Guy Straus, published  by Quaternary International, the official publication of the International Union for Quaternary Research (INQUA), an organization for which he served as long-time Human Evolution Commission president, member of the U.S. National Committee, and guest-editor of six QI volumes during his career.

The 224-page, large-format volume includes an editorial by Straus’ former Ph.D. student Lisa Fontes, who oversaw the collection of articles by authors from around the globe including the United States, Portugal, Spain, Japan, Germany, Belgium, Australia and United Kingdom.

This recognition by Straus’ former students, along with symposia in his honor at the Society for American Archaeology Annual Meeting in 2016 and at a conference in Portugal in 2017, have left a touching impression on the Leslie Spier Distinguished Professor Emeritus, and quarter-century-long editor of UNM’s Journal of Anthropological Research (JAR).

“It means everything to me, but more important is the fact that I have contributed a lot to the empirical record and to our understanding of the Ice Age past with publications that hopefully will stand the test of time, at least as foundation stones for continuing research,” said Straus. “Even U.S. students who have gone on to do non-Stone Age work here have become productive people and sometimes leaders in their own fields, archeological or otherwise, with excellent publications to their names.” Some of Straus’ students who have made their mark in  world archeology include Mike Petraglia, Brad Vierra, Kaoru Akoshima, Armand Mijares, Becky Miller, Mary Stiner, Steve Kuhn,  Rebecca Schwendler, Yuichi Nakazawa, Lisa Fontes, Meng Zhang, among others.

"It means everything to me, but more important is the fact that I have contributed a lot to the empirical record and to our understanding of the Ice Age past with publications that hopefully will stand the test of time, at least as foundation stones for continuing research." – Lawrence Straus

The Festschrift consists of 14  research studies ranging from North Africa , Asia, the Iberian Peninsula and Western Europe, to North America, and represents some of the latest work by colleagues that in several cases build upon significant discoveries and ideas from  Straus’ career. Many of the papers in this volume present findings from studies on the Iberian Peninsula, and show the outsized influence Straus has had on its archaeology  from his 1975 University of Chicago Ph.D. dissertation on the Cantabrian Solutrean to his last two decades of work at El Mirón Cave, which was the subject of Straus’ 2016 UNM Annual Research Lecture.

For example, the volume includes research on the Middle and Late Pleistocene mammal fossils of Arabia and surrounding regions: implications for biogeography and hominin dispersals, by Mathew Stewart et al., and a study of the earliest blade technology in the northeastern Asian Upper Paleolithic by H.S.Groucutt et al.—both products from Petraglia’s research group at the Max Planck Institute in Germany

There’s also research from Spain’s Cantabrian region, with articles delving into Upper Paleolithic and Mesolithic lifeways. Rebeca Garcia-González et al. analyze factors that contributed to hypercementosis, an excessive buildup of calcified tissue on the roots of teeth from the 19,000 year-old Magdalenian human mandible of  the “Red Lady of El Mirón,” one of Straus’ most significant discoveries made with colleagues in El Mirón cave in Cantabria in 2010.

G.A. Clark, with whom Straus got his first research experience in Spain in 1972, contributes another Cantabrian paper co-authored with C.M.Barton: a study of landscape, climate change, and forager mobility during the Upper Paleolithic period in northern Spain. This develops a critical landscape perspective and builds upon Straus’ decades of research in and intimate knowledge of the region’s archaeology.

“Our purpose was to capture the great influence that Lawrence has had in Quaternary archaeology, and to honor his legacy of international, interdisciplinary research that pushes the boundaries of what we know about the past,” said Fontes, an adjunct lecturer in the UNM Department of Anthropology, who was also one of Straus’ last doctoral students. “Through his half-century career, Lawrence collaborated with dozens of scholars in the U.S. and abroad, and his students have gone on to be influential in their own right studying archeology worldwide.”

The volume chapters, all in some way, reflect Straus’s philosophy and what each student or colleague has learned and applied in their lives, both in terms of personal and professional values. It’s a philosophy Straus has tried to follow based on his own education and the influence of both formal and informal mentors and professors, as well as his many experiences in the field in the U.S. and Europe.

“I have taught probably thousands of undergraduates and my goal has always been to be interesting, stimulating, informative and rigorous, but flexible with well-established standards,” said Straus. “I have also trained dozens of students from around the world in my excavations in Spain, France, Portugal and Belgium. Many have gone on to excellent careers either in academics or cultural resource management archeology in the U.S. and abroad.”

"Students should follow their own interests and dreams. I subtly guide them, provide ideas, references, advise and stimulation. One should correct, critique, but doggedly support and never force students to toe a personal line on issues.” – Lawrence Straus

“JAR publishes longer, broadly contextualized articles of general interest, along with many timely book reviews in all subfields of Anthropology,” said Straus, who has been the editor for the past 25 years. “I have now edited 100 issues and am by far the longest-serving editor in JAR’s well-respected history.”

Additionally, Straus created a twice-yearly lecture series: the Journal of Anthropological Distinguished Lecture Series. “I established the JAR Distinguished Lecture Series to bring leading scholars from around the United States to present a lecture to the whole community and a follow-up specialized seminar for students and faculty. All of these lectures are published in JAR.”

The 49th JAR Distinguished Lecture is already set for Nov. 14 and will feature Dr. Tim Pauketat on Cahokia, the site of a vast pre-Columbian Native American city directly across the Mississippi River from modern St. Louis, Mo.

Leslie Spier Distinguished Professor Emeritus in the Department of Anthropology at The University of New Mexico Lawrence Straus, bottom row, far right, was honored for his lifetime achievements at the 3rd International Conference on the Solutrean 2017.

Straus speaks glowingly of UNM’s Department of Anthropology, where he has spent  his entire professional  career. His research and publishing have influenced the students he’s taught through the questions he has asked, hypotheses’ he has posed, and research analyses and subsequent results he has published.

“Anthropology is the highly diverse, holistic study of humans—biological, cultural and linguistic, past and present,” says Straus. “All students should have some exposure to it, because New Mexico is one of the richest states in the Union in terms of ethnic and linguistic diversity and archeological  heritage and has long had – over 90 years now – one of the leading programs in the nation and is at the core of UNM’s mission.

Straus himself has authored over 600 articles, chapters and reviews in three languages, and authored and/or edited 23 books, monographs, and collected volumes, the latest of which is currently in press by the French Prehistoric Society in Paris.

“Sometimes I found support in the work of my students and other times they have refuted some of what I had argued,” said Straus. “This is most satisfying to me, as I have worked hard to help them define, build on and realize their own work. Students should follow their own interests and dreams. I subtly guide them, provide ideas, references, advise and stimulation. One should correct, critique, but doggedly support and never force students to toe a personal line on issues.”

All the work throughout the decades – the research, the advising and mentoring, as well as one’s best values as persons of character has been instilled through the work that Straus’ students do. “I have never forgotten how hard it is to be a graduate student, so I try to be responsive and to put my students first in what they do, including the review, critique and correction of their  drafts of articles, chapters, presentations and proposals that are always at the top of my pile of things to do—quickly and thoroughly. I try to follow the Golden Rule.”

In the end, Fontes sums it up nicely, “Lawrence, it is hard to find words to express how significant your impact has been on the study of Quaternary prehistory, on your colleagues, and on generations of undergraduate and graduate students from around the world.

“We read the tomes that you have written. We venture across the landscape to the caves where your teams have toiled. We enter museums and burrow among row after row of artifacts unearthed to answer new questions and unravel old mysteries. We hear the echoes of the ages that without you would not be here for us.”