The University of New Mexico Athletic Department hosted its annual Lobo Scholar-Athlete Banquet at the UNM Student Union Building on Monday night, with women's soccer Alexa Cabrales and men's soccer's Lucas Seligman receiving UNM Bookstores/Dining and Food Services Post Graduate Scholarships to highlight the event. The awards were only some of the many handed out at the department's largest academic banquet. 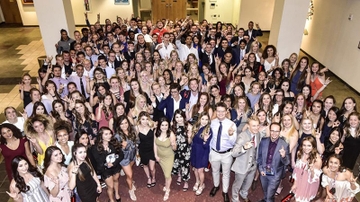 For team awards, the most improved award went to beach volleyball, while the Athletic Director's Cup for the top academic program went to went to women's skiing for the third straight year. Baseball junior Larry Leitha was named the winners of the PACKS Program Award, and Jared Mang, Ednah Kurgat and Cherise Beynon were named the Lobo Club Student-Athletes of the Year.

Overall, 283 student-athletes were named and honored as Lobo Scholar-Athletes for having a 3.2 cumulative GPA. A non-academic award was presented as well, as the Loren Dils Courage Award went to women's tennis' Diana Wong.