David Buozis is not what you would consider a typical college student. The 50-year-old Army veteran has been around the world and has seen and done more than most could fathom in a lifetime. But now, thanks to a support system he found at The University of New Mexico, Buozis will soon add ‘college graduate’ to his long list of accomplishments.

With a three-tour military career that spans more than a decade, Buozis has struggled with Post-Traumatic Stress Disorder (PTSD) for many years.

“Sharing my story is not something I usually do,” he said. “But, I wanted to this time to be able to try and help other veterans who might be struggling with life after the military.” 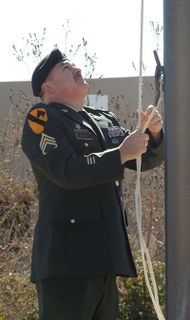 He started his Army career in 1984, just 12 days after graduating high school. Buozis became a medical specialist stationed with a combat field hospital unit in Virginia and eventually became a surgical technician and medic, spending time in Germany before his first deployment.

“I was assisting a surgeon in orthopedic surgery one day when a sergeant comes in and pulls me out of surgery,” Buozis recalled. “The next thing I knew I was on my way to Desert Storm.

After returning from the Middle East, Buozis was attached to a combat division in Bosnia where he would spend several months on his second combat deployment.

“That was the beginning of the problems I knew I would end up with after the military,” said Buozis. “It was bad.”

By the mid-1990s, Buozis returned to the U.S. and transferred into the Army Reserves. Because of his military background, he began to pursue nursing as a civilian career but it didn’t stick and he ended up leaving school.

“I would tell other veterans who are struggling to find a support system...That’s what I found through my girlfriend and at UNM, and I know it probably saved my life." — 2016 UNM spring graduate David Buozis

On September 11, 2001, Buozis, like thousands of other Americans, turned on the news to see the World Trade Center attacks. Immediately, he said he knew he had to go back to active duty.

“I found out that two friends of mine were killed in the Pentagon attack,” he said. “That sealed it for me. I knew I was going to do whatever I had to do for me to go.”

Buozis went back to the Army as a combat flight medic and was part of the initial push into Iraq.

“The first really nasty on the ground stuff was Fallujah,” he said. “We flew in to pick up some wounded and I stayed on the ground with troops. That was the first time I really saw what it was like on the ground there.”

A staff sergeant at the time, Buozis ended up spending about six days on the ground, earning a Bronze Star and a Purple Heart after taking a round to the chest during a fire fight. He said his flak vest stopped the bullet and while he was black and blue, he continued to do his job.

Buozis spent 19 months in Iraq, much longer than he had initially anticipated. After returning to the U.S. he left the military and returned to his home state of Michigan to work with troubled kids. 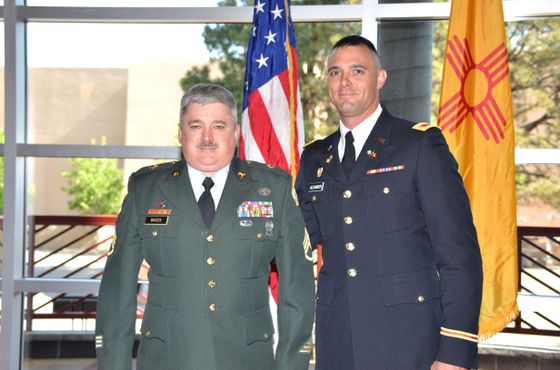 Years later, Buozis began experiencing the effects of PTSD, a condition that impacts around 20 percent of Iraq War veterans, according to the National Institutes of Health. Buozis said turned to alcohol in an attempt to control the PTSD and even considered suicide when the self-medication didn’t work.

But, from that darkness came hope. In 2010, after a chance encounter with a woman online, Buozis moved to New Mexico. That woman, who he is still with today, happened to be an advisor at UNM-Valencia and suggested he go back to school.

Buozis began taking online classes and completed his associates degree at the Valencia campus. He said the classwork and exams constantly tested him beyond his ability to learn the material.

“There were times when I would get stressed, which would fire up my PTSD,” he said. “But my girlfriend was always there to support and help me. She did whatever she could to help me.”

Now, as a student on main campus, Buozis has become very involved with the Student Veterans Association. He said he’s never run into a concentration of vets like he has at UNM, something that has provided him with a great deal of support.

“One of the big things about UNM is that I always seem to meet a fellow veteran in my class,” he said. “Having a brother in class with you like that, who understands what you’re going through, it makes a big difference.”

Buozis is graduating with a B.A. in History and plans to continue to take classes at UNM-Valencia to learn more about Information Technology. He said coming to UNM has been one of the best things he has done for himself and said he isn’t sure where he’d be today if it weren’t for his girlfriend and the University.

“I would tell other veterans who are struggling to find a support system. Find somebody that you can talk to. That’s what I found through my girlfriend and at UNM and I know it probably saved my life. You may never forget what you have experienced but finding a different way to look at those experiences is a good way to move on.”