Students learn to communicate science to the public

Communicating the value and the importance behind science research is essential for a number of reasons as students learned this past semester in the course “Communicating Science: How to enthuse the public about science and engineering and your research.”

One of the objectives in the 400 and 500-level class was to develop an understanding of why it’s important to communicate to the public about science. When your research is funded by federal and or state dollars, taxpayers have a right to know where their money is going and how it is spent. However, communicating research can sometimes be a daunting challenge – even for veteran scientists.

To help alleviate the fears of that challenge, students at the University of New Mexico can prepare for those opportunities in the course taught by Professor Emeritus Diana Northup. The practical class is designed to help students become proficient in communicating their science to public audiences by understanding their audiences, practicing oral and written presentations, and learning to talk to journalists and policy makers.

This semester was only the third time the course has ever been taught. The first time the course was taught was seven years ago. The class was funded primarily by a grant from New Mexico EPSCoR, who thought it was a great idea.

“This semester we had 22 students across three disciplines,” Northup said. “All the sciences that are involved with the earth, including biology, chemistry, and earth and planetary sciences, were included in the class. During the course of the semester, students are exposed to four different areas of science communications including general communication, written, oral and interviewing. All of which involve skills necessary to effectively communicate science. Part of the idea is to incorporate more storytelling.”

The students give in-class presentations in the style of TED and also got the opportunity to practice communicating science in different venues and mediums including the KUNM Children’s Hour, the New Mexico Museum of Natural History as well as class presentations at selected middle and high schools.

Additionally, a variety of guest speakers from the National Park Service, the New Mexico Museum of Natural History, the KUNM Children’s Hour, New Mexico Tech, Martin Heinrich’s Office, and the Albuquerque Journal drop in to offer their expertise throughout the course of the semester.

One of the venues students had the choice to present at this year was at the New Mexico Museum of Natural History. Ayesha Burdett, NMMNH bioscience curator and Debra Novak, chief of education, knew Northup and helped facilitate the presentations.

“Debra and I presented in Diana’s class and we thought it would be a good idea to give them an alternative perspective to presenting science in a museum environment,” Burdett said. “We thought it would give students a new perspective. We gave them an overview of what goes on in the museum and a couple of weeks later the students came back and said this is how we’d like to present at the museum. It’s been a neat and interesting collaboration because we’re encouraging new and interesting things coming through the museum. Students always have a perspective. ” 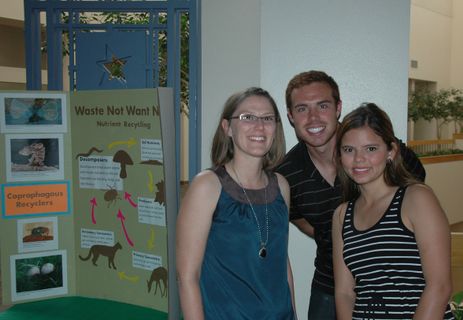 Kristin Proctor, Ben Matheson and Lariza Rosas-Valdez discussed their project titled “Poop” and why it is important, not only as a by-product, but also to the environment and ecosystems.

A handful of students took advantage of the opportunity to present at the museum the week of Earth Day including Ben Matheson and Lariza Rosas-Valdez, who utilized the museum exhibit titled “Grossology,” to setup and discuss their project titled “Poop” and why it is important, not only as a by-product, but also to the environment and ecosystems. Another part of that presentation, “Waste not, want not” was given by Kristin Proctor. It centered around nutrients (animal poop) and why they’re important in everyday life.

“There are actually a lot of animals that eat poop, as gross as that sounds, and the reason is because poop is full of nutrients,” Proctor said. “Nutrients are the chemical building block that we need in order to live, grow and maintain our bodies.”

Another student, Angelica Padilla, gave a presentation on the “Chemistry of Colors” that displayed why and how fireworks explode and how certain chemicals are combined to form the colors they do. “My degree is in chemistry so I’ve always been fascinated with chemistry. I’ve always asked questions as to why things happen and I think chemistry was able to answer those questions for me. Why is that firework blue? Why is that one orange? There has to be a reason so I was inspired to do the research and find out why.”

“One of the keys to science communication is what you think you’re saying is not always what is being heard,” Northup said. “The value of storytelling comes from what you remember.”