In what’s likely the only class of its kind in the country, New Mexico Court of Appeals judges teach students how to think like a judge.

In Appellate Decision Making, UNM Law School students learn how judges think about a case. They learn how judges go about deciding a case and how they collaborate. This process gives them insights into being able to practice before the trial and appellate courts. They become better lawyers.

Sutin initially pitched the idea of the class to the law school and several people contributed along the way. He and Bustamante have been teaching it for seven years.

Banks took Appellate Decision Making, as have several law clerks in the New Mexico Court of Appeals and Supreme Court.

Bustamante says that as far as he knows, there is no other class like it. “Judges from around the country are in awe of this class,” adds Sutin.

Throughout the semester, students act as judges to resolve actual cases before the Court of Appeals. The first day of class, they are divided into groups of three and assigned a case. They study it, analyze the facts and issues, and research relevant case law. They spend weeks working on their opinion about the case and receive critiques from the judges on their writing.

Jaymie Roybal (’16) took the class this spring and says it offers students a real world, special insight into the operations of the appellate court. “My writing and analysis skills were challenged each week in ways they hadn’t been in law school before,” she adds. “Thanks to Judge Bustamante's careful critiques, I feel more prepared to graduate and start my judicial clerkship.” 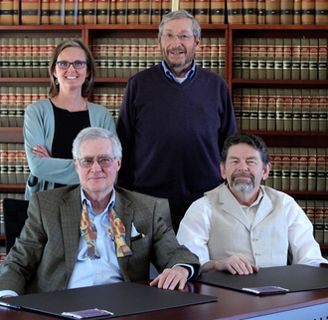 Sitting on the bench
Towards the middle of the semester, the students have an experience they’ll never forget. They don judges’ robes and hear oral arguments about their case in the Court of Appeals Courtroom.

They are encouraged to be an “active bench” – to ask questions and respond to the advocates’ arguments.

They see that their first impressions aren’t always valid. “Often students start out wanting to rule a case one way,” Bustamante says. “Their first take is uneducated; we all come with our own bias. They learn that to rely on what the law requires and what the facts dictate.”

“They read bad briefs,” he continues. “They are stymied by arguments. They are stymied about how to decide the case. It’s not as cut and dried as they thought. It’s a much more nuanced process than it appears.”

Class helps students become better litigators
Sutin says that if the student wants to be a trial lawyer or litigator, the class helps them to become a careful lawyer. “Students are able to foresee what they need to do to become really good. They learn to understand mistakes; they learn the importance of writing good, concrete, clear briefs. They see the usefulness of oral arguments.”

It’s not an easy class. “Students don’t get the hang of producing a really good product, but they do learn the process,” says Sutin.

“They learn to appreciate the role of a judge. They learn not to be intimidated,” he adds.

Patrick Coronel (’17) says all of the judges who participated demonstrated “a willingness to have candid conversations about the inner-workings of our state’s courts” and that all “were approachable, committed to the course’s goals, and eager to positively impact our legal education at UNM.”

He concludes, “I cannot imagine a similar course being as successful at another law school.”

Marion Carter (’16) agrees, saying, “The small class size, the seminar style round table discussions, and the opportunity to hear from and interact with judges from a variety of state and federal appeals courts made this class unique and a favorite in my law school experience thus far.