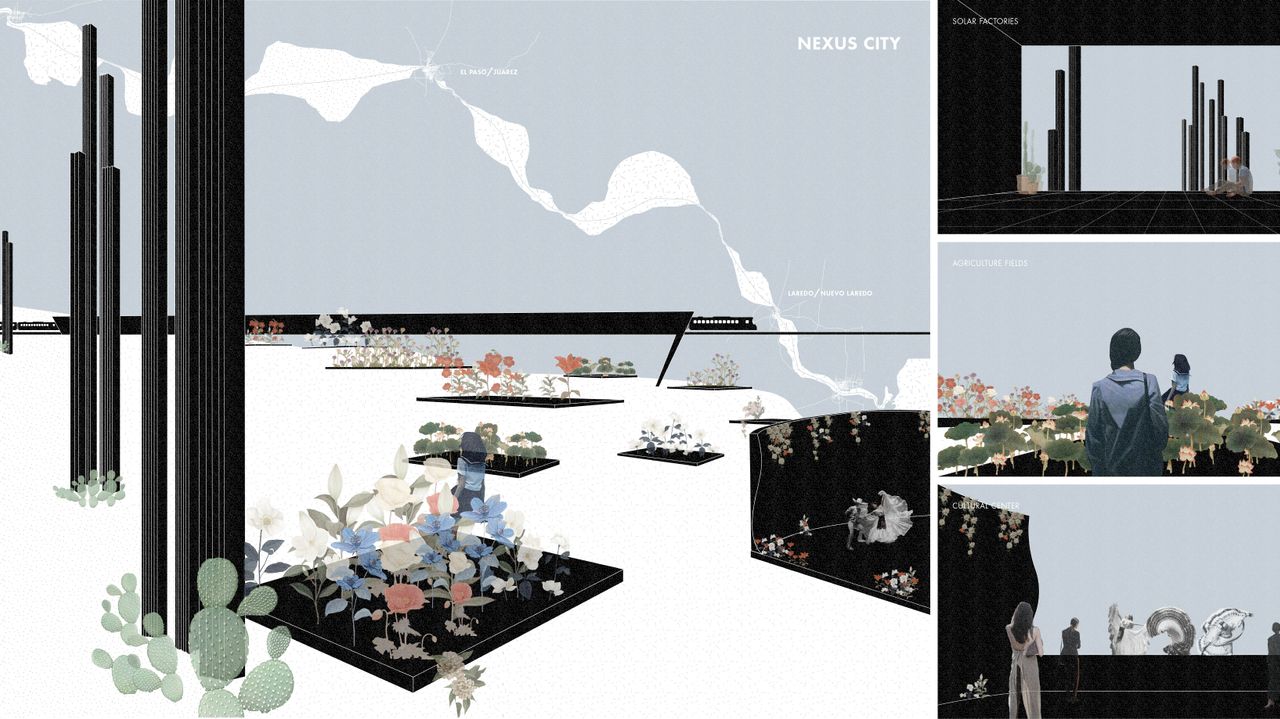 UNM students are using technology to travel the world and create innovative pieces of design work.

University of New Mexico Assistant Professor of Architecture Ane Gonzalez Lara took her students on a trip – virtually, of course – to the Demilitarized Zone (DMZ) between North and South Korea.

The challenge for them was to design a bath house, as part of an international competition.

“It was a difficult project because of the austere landscape of the DMZ. How do you place something that features leisure in a military zone?” she said.

In the end, the winning entry was similar to one student’s design. Gonzalez Lara and her students then moved from the DMZ to something a little closer to home – President Donald Trump’s wall between Mexico and the United States.

“I asked the students for proposals that are alternatives to Trump’s wall,” she explained, adding that some designs were strictly architectural, while others were more philosophical in nature.

“We visited Juarez/El Paso to conduct a site analysis. Seven of the 11 students in the studio are from the border region,” she said.

The analysis reveals rigorous conditions, difficult topography, multiple species – and people – that cross the border. Each student also wrote a letter to President Trump. One encouraged him to consider sustainable energy and other potential profit generating industries on the border.

One of the more philosophical approaches suggested a “Gradient Border” using holograms as a transitional space between countries, where the border is not a line, but a region.

Another project was titled, “Destino de Oportunidad” and involved an area between the two countries that belongs to neither – therefore eliminating the border crossing hassle for companies wanting to draw workers from both sides of the border.

Meanwhile the “Nexus City” project was designed to take public land and create solar factories, agricultural and cultural centers that celebrate all border cultures. In an informal vote of people who critiqued the projects, “Nexus City” won the most votes.

“It would be a self-sufficient region between the two countries that benefit both and is connected by a high-speed train,” Gonzalez Lara said.

Another suggested “Reverse roles,” positing that building the wall will probably make United States citizens want to go to Mexico. Reverse roles also explores the futuristic consequences of the border.

“Five Senses, Five Experiences” is designed to bring people from both countries together, connecting them through their senses. Featuring five pavilions, each would provide a sensory experience, helping people understand the environment and the shared experience. It would hopefully encourage people to reject the wall.

Water is an issue affecting both sides of the border. “Agua Pura” is designed to bring people together over water.

“The idea is to create zones and areas where water is collected and purified. The site would be used to circulate the clean water,” Gonzalez Lara said.

But the course isn’t over yet. The students had lots of time to think about the big issues and big ideas. Now they are honing in on one site: Chamizal Park, which spans the border. They will be presenting their ideas on Friday, May 5. The students have given their group a name – This Is Not A Wall – and have taken to Twitter, #ThisIsNotAWall to promote the project and give people a place where they can share their ideas.