UNM Anthropology Professor Martin Muller and Harvard Human Evolutionary Biology Professor Richard Wrangham co-direct the Kibale Chimpanzee Project, a long-term field study of the behavior, ecology, and physiology of wild chimpanzees in Uganda.  When animals die in the forest, their skeletons are preserved for researchers like Nelson.

Nelson wants to eventually look at the diet of hominids to explore what they ate and how they were able to thrive and spread.  At UNM Nelson teaches Human Origins, Evolution and Human Emergence, Paleoanthropology, Human Behavioral Evolution, Primate Evolution, and a lab course in paleoecology. 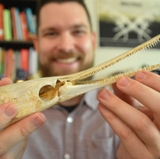 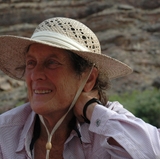