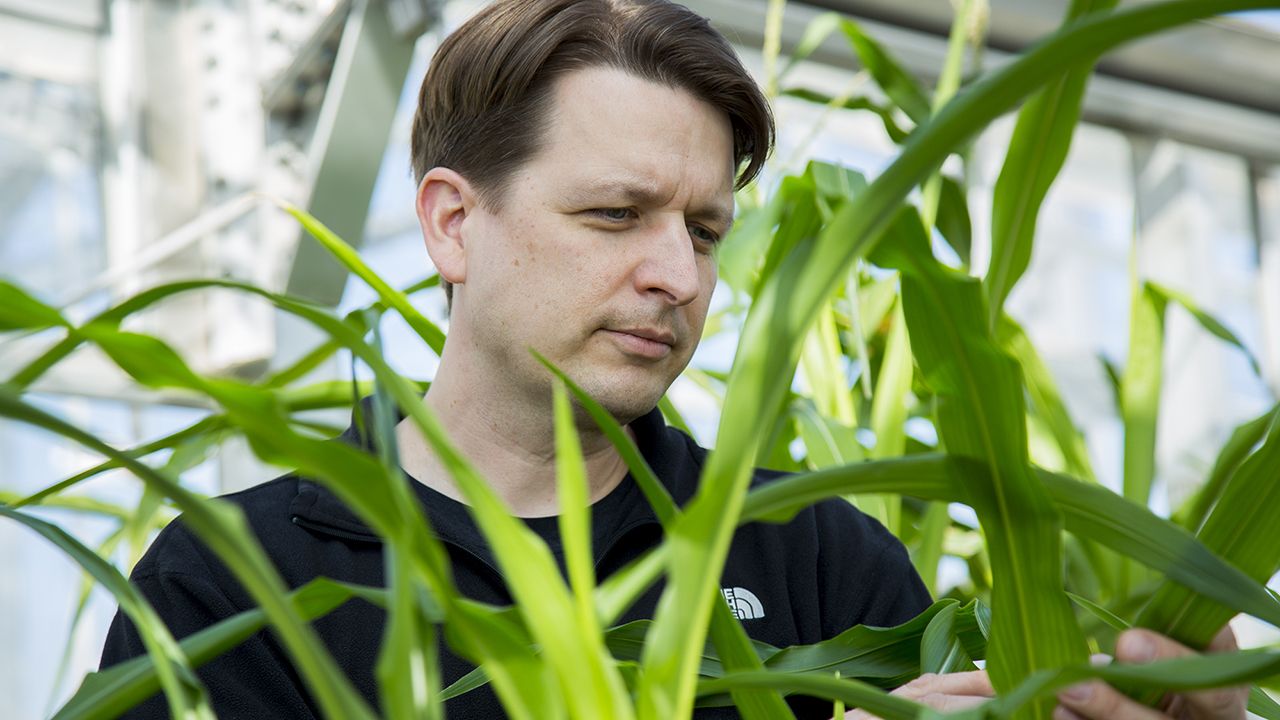 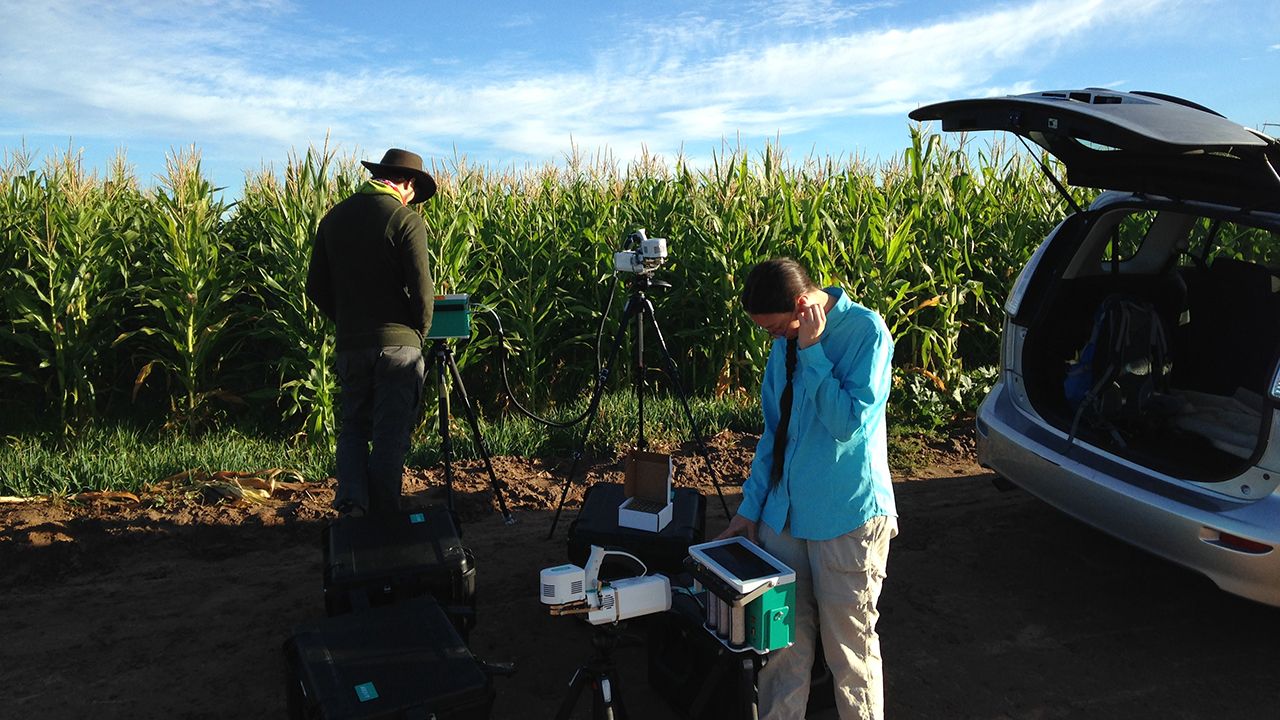 (l. to r.) Graduate students Joseph Stinziano and Samantha Stutz testing new rapid measurements of plant function in the field. These methods will be used to help validate data from the new microneedle and micro-GC sensors. 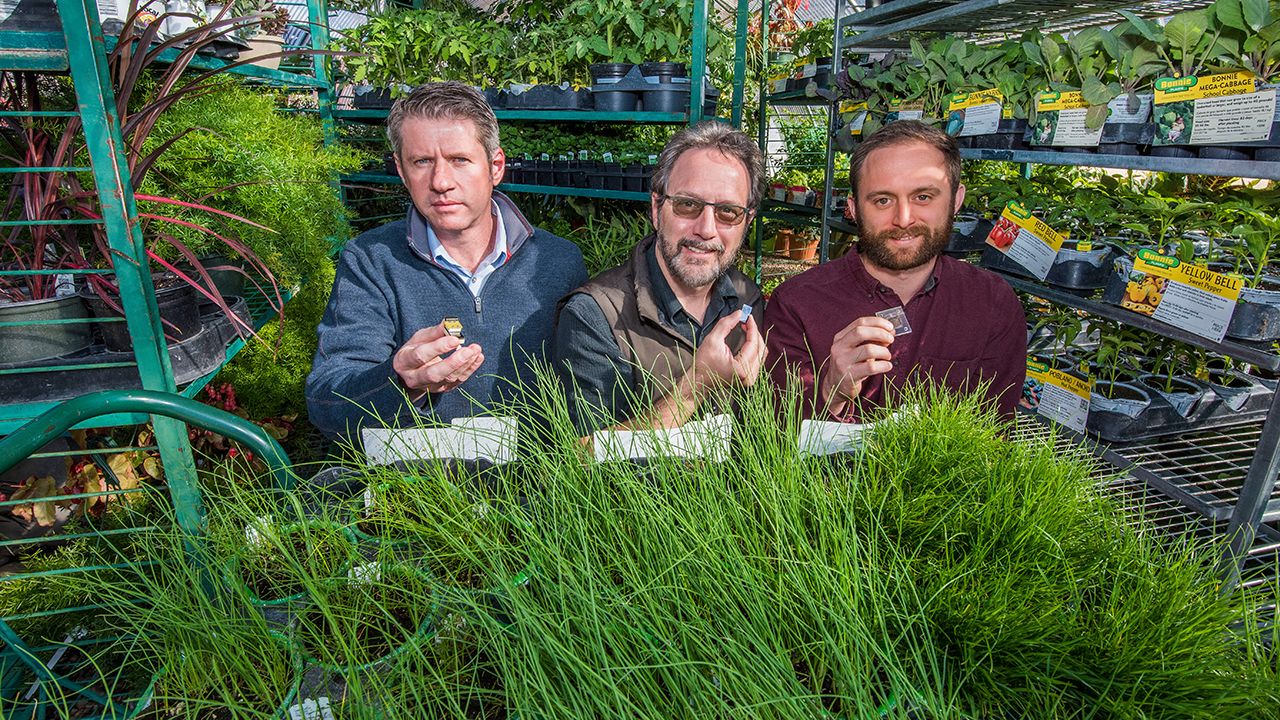 Agriculture consumes about 80 percent of all U.S. water. Making fertilizers uses 1 to 2 percent of all the world’s energy each year. A new program hopes to develop better crops — super plants that are drought-resistant, use less fertilizer and remove more carbon dioxide from the atmosphere.

The insights gained from these sensors, with plant experts from The University of New Mexico and the New Mexico Institute of Mining and Technology, will guide breeding of better varieties of sorghum. Sorghum is a drought-tolerant grain mostly grown for animal fodder and biofuels in the U.S. but relied upon as an important food crop in Africa and parts of Asia.

“If successful, these technologies will usher in a new era for research on plant function." –David Hanson, UNM Professor of Biology

The sensors will be easy to adapt to other crops too, said Eric Ackerman, manager of Sandia’s Nanobiology department and principal investigator for the ROOTS project.

Though roots are hard to access and study, thoroughly understanding how they work and how to improve them is essential for drought-resistant crops that need less fertilizer. Deep roots can tap additional water sources and extensive root systems can gather more nutrients, Ackerman said. Roots also are critical for depositing carbon into the soil, instead of the air.

“It is really exciting to see how Eric Ackerman and his team are repurposing miniaturized sensing technologies originally developed for national security applications, such as warfighter health monitoring or detection of chemical agents for real-time monitoring of hard-to-access root systems,” said Anup Singh, director of Sandia’s Biological and Engineering Sciences Center.

Minimally invasive microneedles to monitor plant productivity
One technology researchers will adapt is a microneedle-based fluidic sensor. This matchbox-size device was originally developed for biomedical applications, such as the painless detection of electrolyte levels of warfighters on arduous missions. However, due to its size, minimally invasive set-up and ability to constantly measure the levels of important chemicals, Sandia researchers believe it’s valuable for other research, such as plant monitoring.

For the ROOTS project, researchers are interested in monitoring the products of photosynthesis, such as simple sugars, important root excretions, such as oxalic acid, and water pressure. Water pressure, or turgor pressure, is an important measure of plant health, even before they wilt. Current methods for measuring these critical indicators are costly, too invasive or don’t provide continual data.

“The microneedles will help us measure sugars transported by the plant to and from the roots before soil microbes can use them, and will give us a better understanding of how plants add to soil carbon,” said Ben Duval, a plant and soil expert at the New Mexico Institute of Mining and Technology.

Ronen Polsky, who leads the microneedles research, doesn’t think the detection chemistry or the needles themselves will need much tweaking to work with plants, but one challenge will be determining the best way to attach the sensors to the plants. “The cool thing with our task on ROOTS,” he said, “is that nobody has done this in plants before. It’s such an intriguing project to take these sensors and apply them to plants.”

Initial support for developing the microneedle sensors came from Sandia’s Laboratory Directed Research and Development program with additional funding by the Defense Threat Reduction Agency (DTRA). The sensor was also the subject of doctoral work by Philip Miller, currently a postdoctoral researcher at Sandia working on the ROOTS project.

Mini gas detectors to monitor plant health above and below ground
The other Sandia technology used in the ROOTS project is a micro gas chromatography system, or micro-GC. Sandia has been working on hand-held systems that detect and analyze gases indicative of chemical, biological and other threats for almost 20 years.

For ROOTS, researchers will use the micro-GC systems to measure volatile organic compounds (VOC) above and in the ground. Ethylene, a common VOC that triggers fruit ripening, also can signal drought stress. Plants also use chemicals related to menthol and a component of eucalyptus smell as distress signals, for instance, if they are plagued by pests.

UNM plant biologist Dave Hanson, co-principal investigator, said the “micro-GCs will be used to detect signals from environmental stress, such as drought, heat and nutrients, and biological stress, such as insect and pathogen attacks, as well as assess root growth.”

“First, we have to figure out what the important VOCs actually are, which is always a challenging problem,” Manginell said. “Once we figure out what those are, the challenge is putting together the miniaturized system to go after those.” Then Manginell’s team will take their prototype hand-held system and test it in the field.

Initial support for developing the micro-GC system came from Sandia’s Laboratory Directed Research and Development program with additional funding from the DOE, Defense Advanced Research Projects Agency and DTRA. Systems based on the same body of research are being used to analyze water quality and could be used to monitor diseases by just “smelling” a patient’s breath, said Manginell.

‘Usher in a new era’
Sandia’s project is one of 10 ROOTS projects funded by ARPA-E. Lawrence Berkeley National Laboratory and a number of universities will use other approaches and technologies to tackle the challenge of breeding better crops to reduce atmospheric carbon dioxide levels.

“The microneedles and micro-GC developed by Sandia are extremely exciting because of their potential to provide critical data on plant function that have been unattainable in any setting,” said Hanson. “If successful, these technologies will usher in a new era for research on plant function. They would also contribute to economic growth.”

Since both technologies are small, less expensive than alternatives and offer critical insights, the team hopes they could directly aid agricultural research and even commercial farming quickly and easily.

Ackerman said, “The overall hope for Sandia is that this could open an important new national security area for the biology program to study beyond our current focus on bio-threats and biofuels. It brings us into the energy, water, climate, agriculture nexus, and we are hoping that there will be more opportunities in the future to use even more Sandia technologies.” 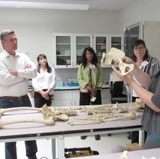