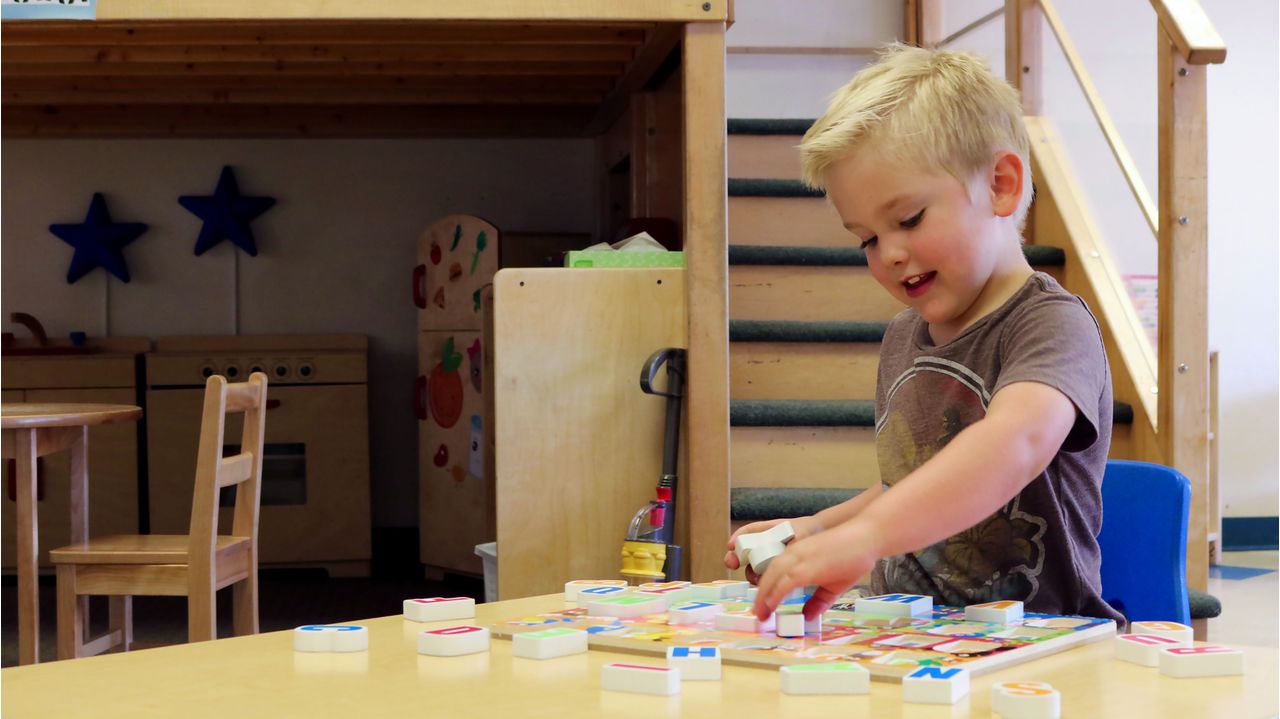 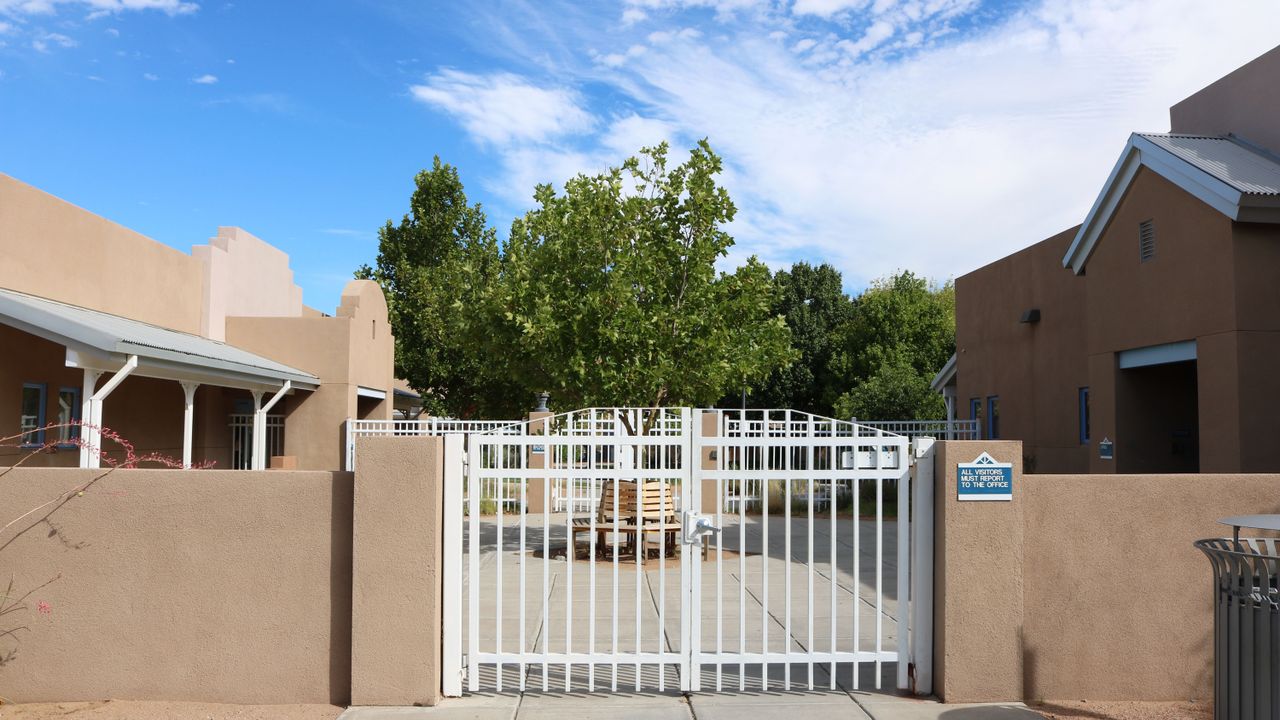 UNMCC is located just north of main campus, off of University and Camino de Salud. 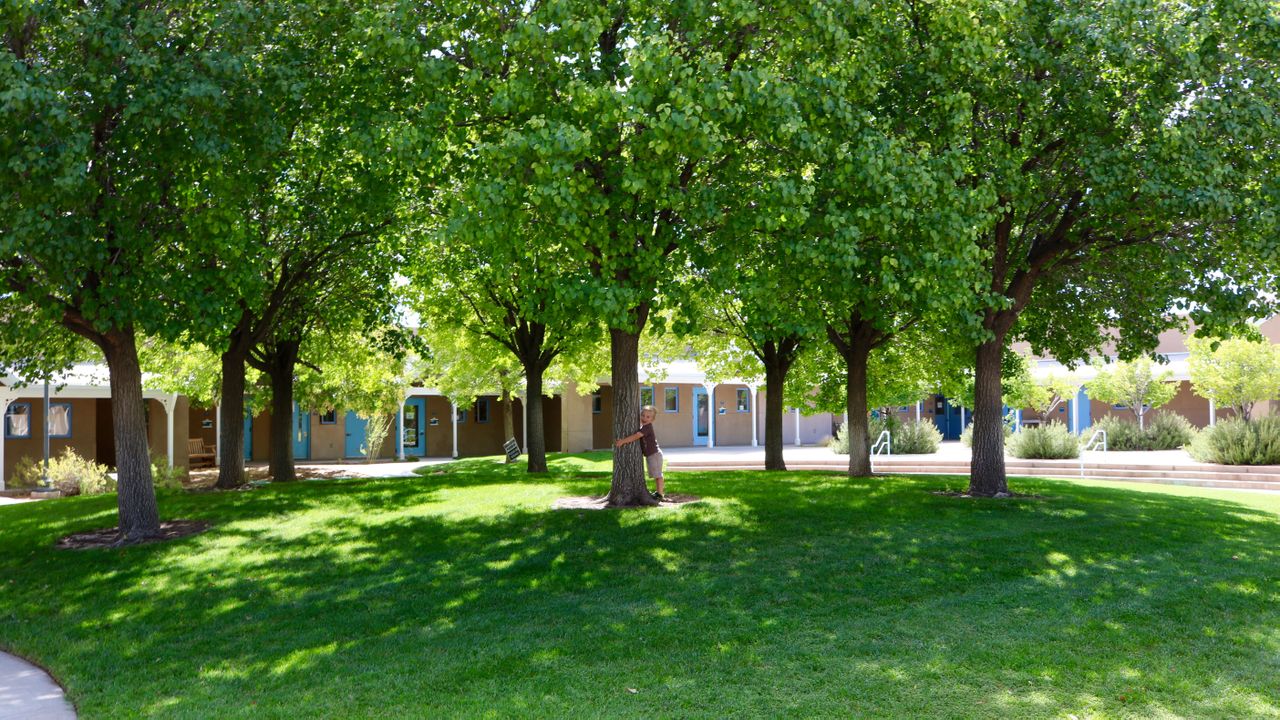 The classrooms at UNMCC surround a grassy courtyard for the children. 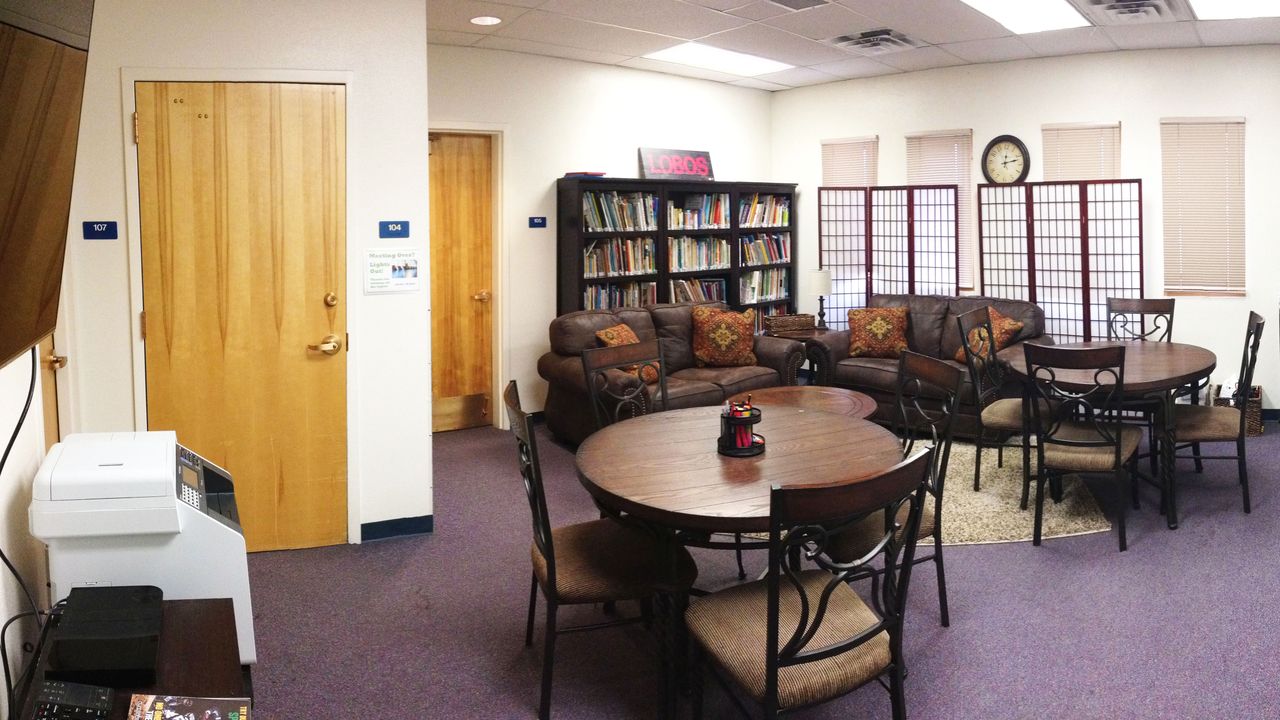 The Children's Campus has a quiet study space for student-parents. It has refrigerators, Wi-Fi and free printing. 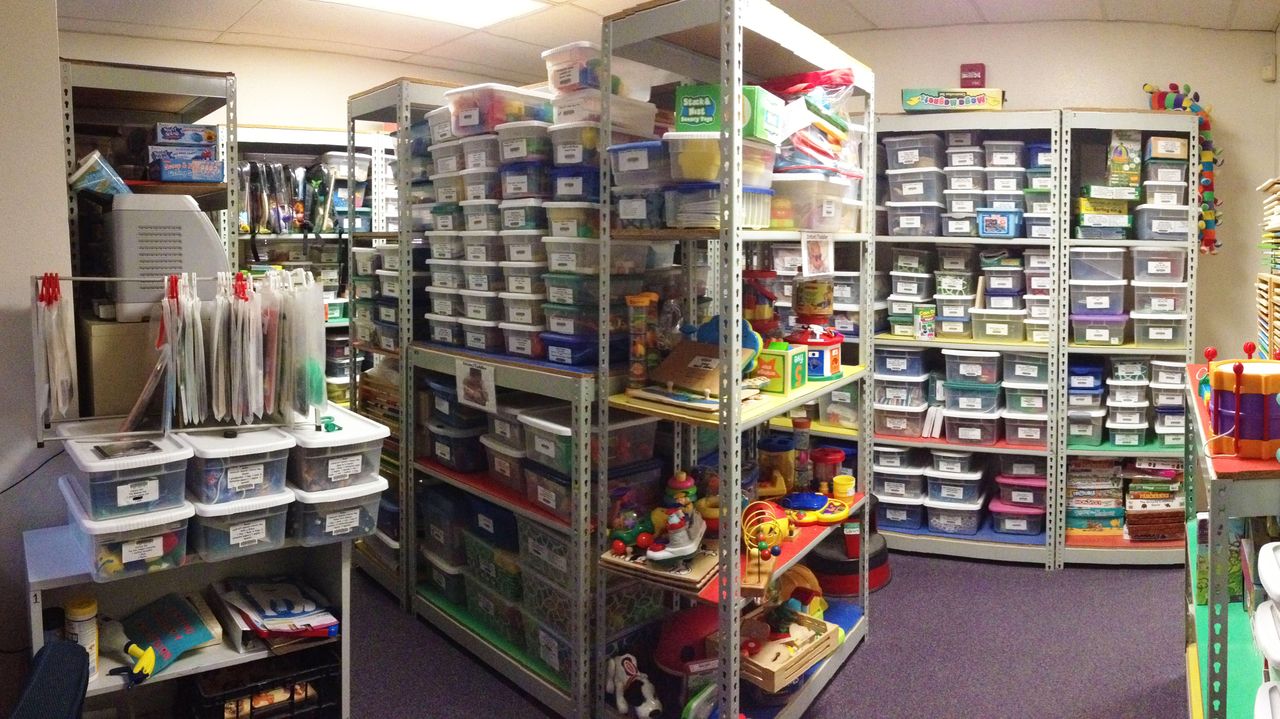 The Children's Campus has a lending library for parents. It includes educational toys, instruments and puzzles they can check-out for use at home. 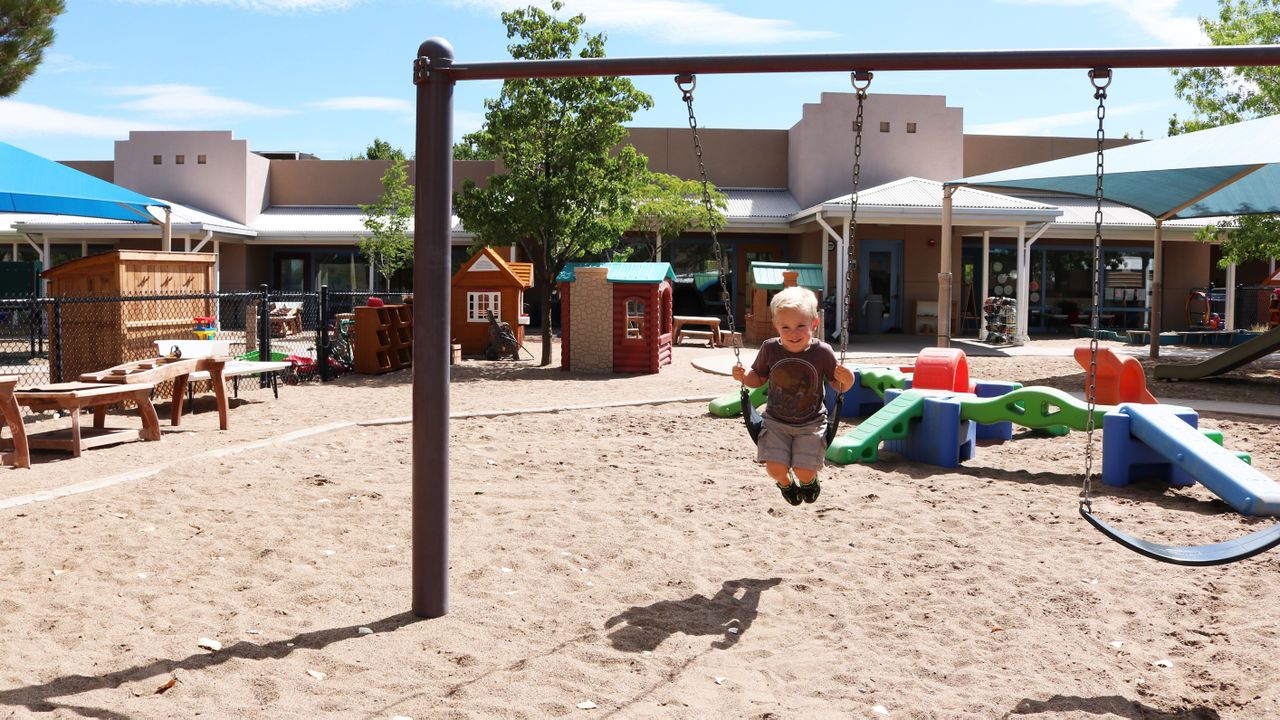 The classrooms at UNMCC have age appropriate outdoor areas for the children.

College degrees lead to better jobs. Better jobs help families get out from behind the proverbial eight ball that sits in the way of hopes and dreams. With many programs aimed at getting prospective students into desks, one is especially critical for success and that’s childcare.

It is estimated that student-parents make up over 30 percent of students at The University of New Mexico. Nationally, this particular group of students has grown from 3.2 million to 4.8 million over the past two decades.

With the need for childcare being at an all-time high for students, it is unfortunate that many public institutions are cutting budgets starting with these programs.

“This drop-in program allows parents like myself to maximize time with our children as well as completing our coursework so that we can better our children's lives." —Serena Wheaton Smith

The National Coalition for Campus Children’s Centers (NCCCC), a nonprofit educational membership organization that supports research and activities affecting college and university early childhood educational service settings, family and work issues, and the field of early childhood in general, recently published survey results that finds nearly 95 percent of two- and four-year colleges that have childcare, maintain a waiting list with an average of 82 children.

The NCCCC also found that less than half of four-year colleges provide some form of childcare compared to 53 percent in 2003. The programs that do exist also have varying degrees of participation limitations like employment expectations to qualify for childcare subsidies.

Here’s where you see the need here, in our community. The University of New Mexico Children’s Campus for Early Care and Education (UNMCC) has nearly 1000 children on a waiting list—this is one of the largest, if not the largest in the country. Of these children waiting for care, 48.4 percent have parents who are currently enrolled as a student at UNM.

The University of New Mexico has maintained its support for student-parents, as well as its faculty and staff, with the UNMCC—a childcare facility serving Lobos since 1982.

The Children’s Campus is located just north of main campus and services parents from all University departments and programs including the Health Sciences Center.

UNMCC has been nationally recognized as a five-star licensed facility and is accredited by the National Association for the Education of Young Children (NAEYC).

The program is supported by student fees and is under the umbrella of Student Affairs. UNMCC is also supported by various State and Federal grants.

One of these grants is of great significance to student-parents trying to obtain their degree. It’s the Child Care Access Means Parents In School (CCAMPIS) program.

With CCAMPIS support, UNM School of Law student Serena Wheaton Smith has been able to turn her dream of being an attorney into a reality while raising her 11-month-old.

“This grant has allowed me and others to take college and graduate courses at the university while our children are in a drop-in program,” said Wheaton Smith. “This drop-in program allows parents like myself to maximize time with our children as well as completing our coursework so that we can better our children's lives. No other program in the city offers similar drop-in care or is similarly priced.”

Currently in her second year in law school, Wheaton Smith is not allowed to work fulltime as a law student. In order to complete her education, she has had to take out significant student loans to pay for tuition. And like many student-parents, she doesn’t have family who are able to babysit while she is in class.

The Children’s Campus was awarded a four-year CCAMPIS grant in 2014 to provide free, low cost or discounted services to UNM student parents.

“The CCAMPIS program enables the Children’s Campus to provide free or low-cost, high quality drop-in childcare,” says Program Specialist Victoria Dimas. “This drop-in care option provides students with the ability to contract for care a few hours a week making it much more financially viable, thus eliminating a financial barrier to childcare, a struggle that many student parents face. The CCAMPIS program also supports the UNMCC in maintaining an evening care program, in which student parents have access to childcare until 10 p.m., Monday-Thursday, during the academic year.”

With childcare vital in allowing student-parents to balance school and family successfully, many directors like Daniela Baca are concerned that CCAMPIS grants have been placed on the federal budget chopping block.

“Over the past 12 years, the CCAMPIS program has contributed to a reduction in the wait time for student families needing immediate care,” said Baca. “Elimination or funding cuts to this program will make accessibility to child care extremely difficult, thus inhibiting the ability for student parents to have access to free or low-cost early childhood services for their children. In turn, this affects the students’ ability to persist in their studies, leading to a decrease in classroom attendance, lower GPA, and potentially disenrollment from the University."

Despite budget cuts to all levels of higher education at the state level, UNM is still committed to the success and growth of UNMCC. A major expansion of the facility is planned as a capital project in the near future.

For more information on the UNMCC and its year-round programs, visit their website or call 505-277-3365.