Teaching to the Heart

As a student and an educator, Dr. Daisy Thompson has seen firsthand that it takes both academic excellence and cultural competency for Native American students to be successful.

She says that no matter how much Native American students may achieve academically, they don’t feel complete when they don’t know their language and culture. Worldly success evolves when they know who they are. “Cultural competence is really important when it comes to our [Native American] kids,” Thompson says. “It’s not about head knowledge. That comes later. We teach to the heart.”

Thompson, who graduated with a Ph.D. in Special Education from the University of New Mexico in 2014, is the director of Indian Education for Albuquerque Public Schools and creator of the APS Indian Education Plan, which is designed to incorporate culturally relevant teaching methods to enhance the educational experience for Native American students in APS. “This plan is the only Indian Education Plan anywhere that I know of,” she says with pride.

“Many Native American students in urban areas become removed from their tribal identity,” Thompson said. “The values model helps them reconnect with their traditional and spiritual roots.”

Students use the Native American Values rubric as a self-evaluation tool to measure themselves, with the goal of gaining wisdom. As they begin to analyze their actions and attitudes, they connect more with their community and their families.

“Cultural competence is really important. It’s not about head knowledge. That comes later. We teach to the heart.” – Dr. Daisy Thompson

Traditional Upbringing
|Thompson had the benefit of growing up with a teacher who taught to her heart. From the age of four, she was given a very traditional Navajo upbringing by her great-grandmother, who was a constant storyteller. “Much of what I learned, I learned through storytelling,” she says. “I now realize that many of those stories were about life.”

As they worked through the day and even late into the night, Thompson’s grandmother would tell stories about every aspect of how to live—from how to treat guests, to the dangers of gambling, to showing respect for all people, including those with disabilities. 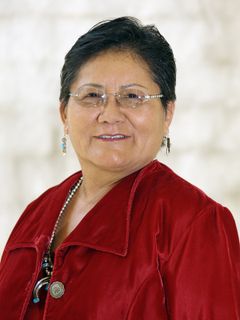 At the age of five, Thompson was sent to a reservation boarding school, which she attended through the fourth grade. She started school speaking only Navajo and was amazed by her new surroundings and intensely curious about the new world she found herself in.

One of the most exciting things she discovered was reading. “It was the greatest gift that my teachers gave me because it opened doors to new worlds for me,” she says. “It helped me become the person I am today, and it helped me advance in education and in my career.”

From the Classroom to Administration
Thompson began her teaching career in Arizona, teaching general education in elementary schools. She decided to work on her Master’s Degree, and chose special education because she wanted to be more well-rounded professionally. She moved to Gallup to teach special education, eventually becoming a special education coordinator for Gallup-McKinley County Schools.

The experience made her realize that she could be more effective and reach more students as a school administrator. “I decided to work for my school administration licensure because I felt the needs of Native American students were not adequately being met, especially with regard to testing and parental notification,” she says.

“Many Native American students in urban areas become removed from their tribal identity. The values model helps them reconnect with their traditional and spiritual roots.”

Belonging is the need to belong and to be loved, which everyone desires. We feel “belonging” when we are greeted. It is even better when we are befriended.

Mastery is the inborn thirst to learn and to achieve. With mastery comes self-confidence; it is the inner motivation that helps us reach our goals.

Independence is the need to take risks, to have choices and the desire to try new things. We gain responsibility when we are given the opportunity to make decisions.

Generosity is the need to give and share with others our time, attention, and material things, as well as how we care for others and give them recognition.