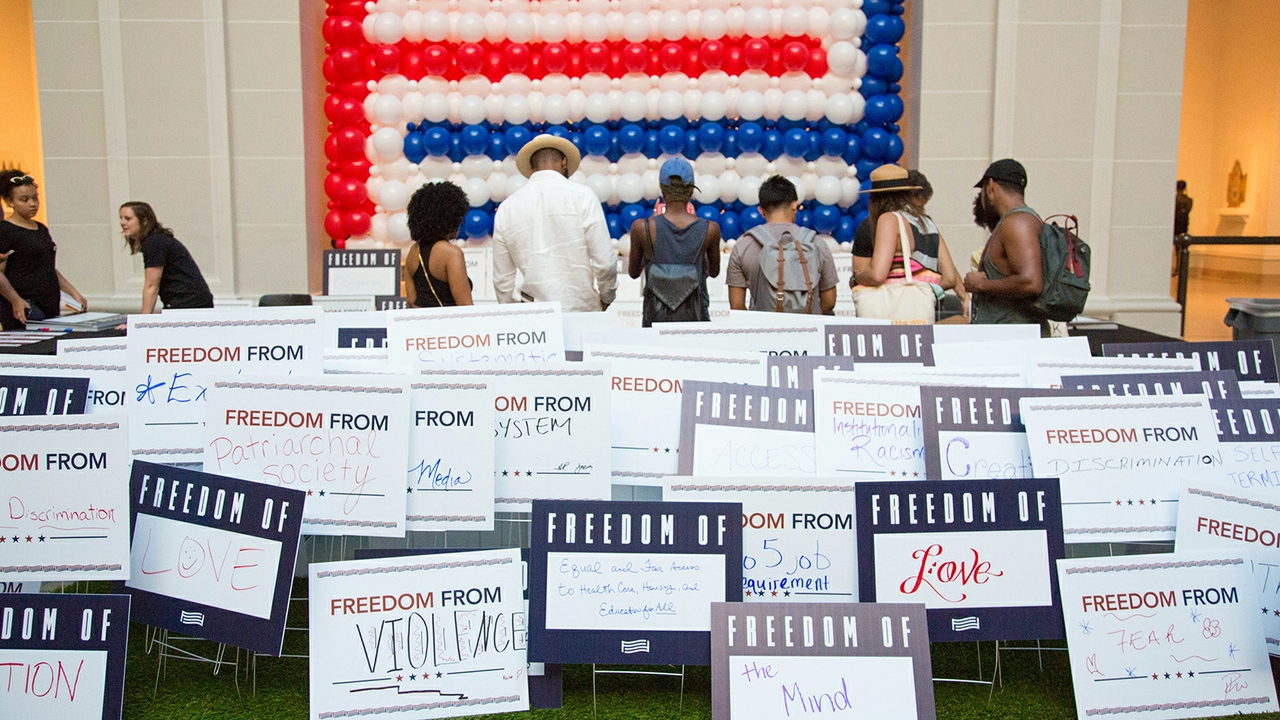 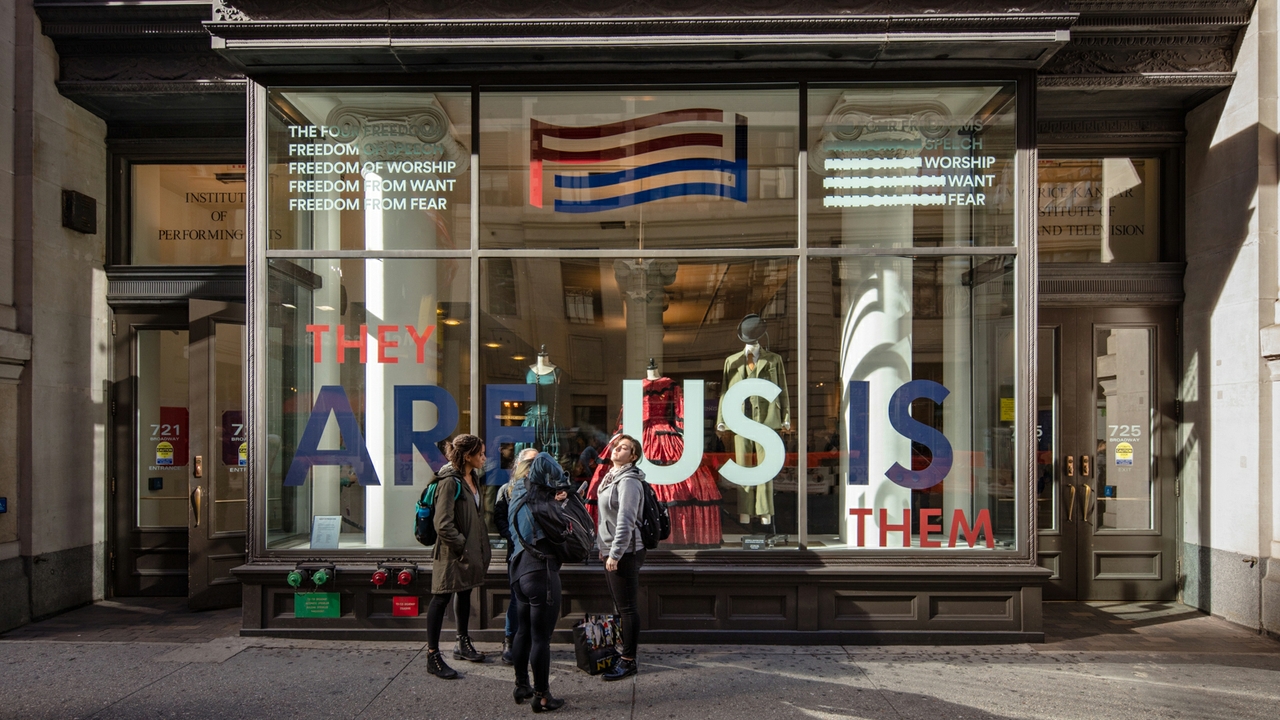 For Freedoms x NYU - They Are Us Is Them 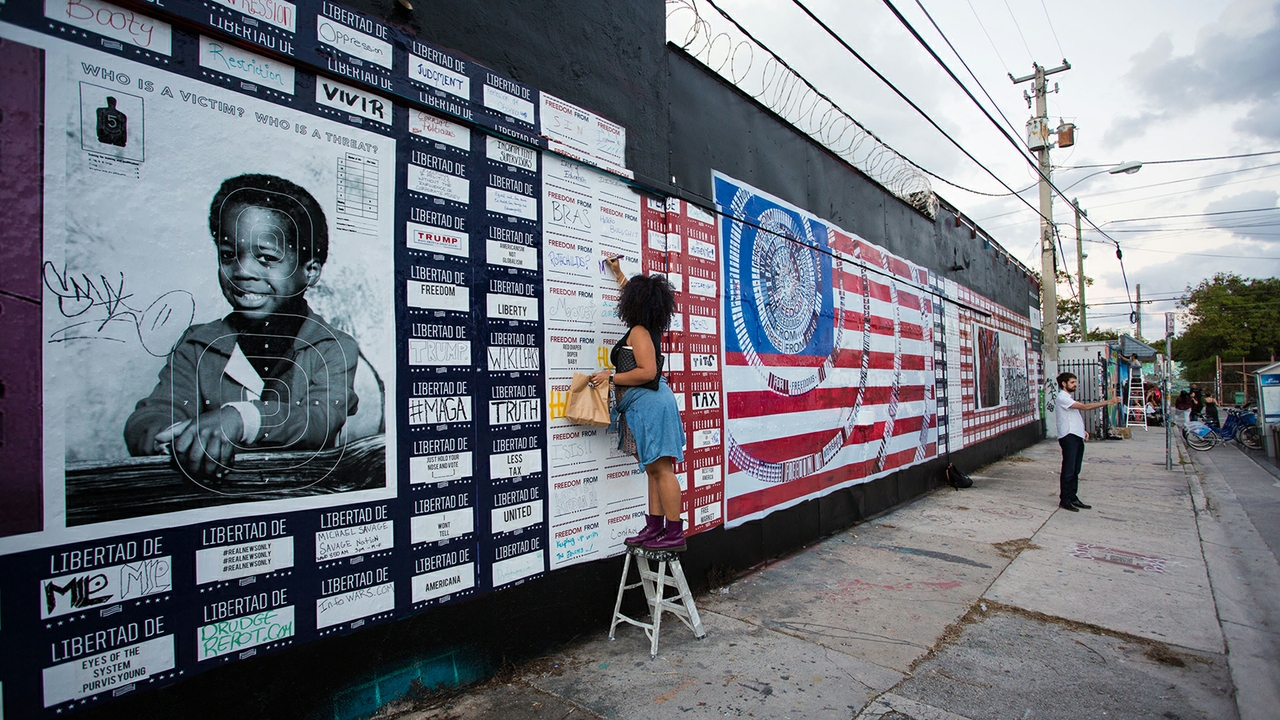 The art of civic engagement

Beyond the world of entertainment, there’s an intersection where art and activism meet. This is where you will find For Freedoms, a self-described “hub for artists and art institutions who want to be more engaged in public life.” In collaboration with For Freedoms, The University of New Mexico (UNM) Art Museum and College of Fine Arts are joining the 50 State Initiative, a project centered around “the vital work of artists.” These student-driven projects are art with an endgame – getting people to participate in democracy.

In 1941, President Franklin D. Roosevelt spoke to Congress in a State of the Union address that came to be known as “The Four Freedoms” speech. He talked of “a world founded upon four essential human freedoms,” namely freedom of speech and expression, freedom to worship, freedom from want and freedom from fear.

Inspired by Norman Rockwell’s paintings illustrating these concepts, the For Freedoms platform “uses art to encourage and deepen public explorations of freedom in the 21st century.”

The 50 State Initiative is a visionary – not reactionary – project designed to engage the public in civic discourse and action, with a focus on Tuesday, Nov. 6 and the midterm elections.

Numerous departments within the College of Fine Arts are participating, with professors creating room on their syllabi for student-led enterprises that demonstrate the artist’s role in democracy.

“When we met with professors to discuss this project, they were really interested in having their students think about those things,” said Traci Quinn, curator of Education and Public Programs at the UNM Art Museum. “The students are really what’s driving our participation. Getting them to think about civic engagement and to create their own projects around the significance of that idea.”

The initiative will kick off with a keynote speaker and a For Freedoms Party at the UNM Art Museum. The keynote will be given by artist Aram Han Sifuentes, and will focus on the artist’s role in civic and democratic participation. The For Freedoms Party follows the talk, with food, DJ Caterwaul, and a voter registration booth. The party, which is free, will give attendees an opportunity to meet Aram Han Sifuentes, and be a part of the For Freedoms project and participate in civic engagement.

50 State Initiative Launch - in collaboration with For Freedoms

Keynote with Aram Han Sifuentes, 5:30 p.m.
"We are never never other. We are the center."

For Freedoms Party, 6:30 - 8 p.m.
Meet Aram Han Sifuentes, dance to DJ Caterwaul, share what freedom means to you, and register to vote!

“The event basically takes FDR’s idea and opens it up to everyone else to define what freedom means,” Quinn said. “The gallery will be a huge block of lawn signs, and people will be able to write their idea of freedom in the space.”

The 50 State Initiative programming runs through Dec. 1, with student work presented in the lead up to the Nov. 6 midterm elections.

“I think what the students do will take various forms,” Quinn said. “For Freedoms provides a really helpful document that illustrates suggested project ideas, based on what they’ve done in the past and what has been most successful, but they’re open to expanding beyond the suggested parameters.”

The central element and connecting thread for what students produce will be the For Freedoms mission, centered around the belief that citizenship is defined by participation, not by ideology. That art can be a vehicle that broadens participation and deepens public discussions of civic issues and core values.

“It’s all about getting the community involved,” Quinn said, “and we’re really excited to see where the students take this.”