The famous tree at the D.H. Lawrence Ranch

Like the song of a siren, the D.H. Lawrence Ranch in northern New Mexico has long enchanted artists of all disciplines. Aside the ranch’s namesake, notable guests such as Tennessee Williams, Aldous Huxley, Ansel Adams and Georgia O’Keeffe, to name a few, once strolled the 160 acres of aspen, pine and wildflowers nested at 8,500 feet on Lobo Mountain.

In 2012, the D.H. Lawrence Ranch, originally known as the Kiowa Ranch, was featured in the documentary, “Awakening in Taos," which aired on PBS. It tells the story of American visionary, Mabel Dodge Lujan, then owner of the ranch, who is credited for attracting many modernists to the Taos Colony of Artists. In August of this year, the Los Angeles Times published a nostalgic piece highlighting the reopening of the ranch. And most recently, Diane Cook and Len Jenshel, two of America's foremost landscape photographers, visited the ranch to shoot pictures of a distinguished Ponderosa pine that stands close to the cabin once inhabited by Lawrence and his wife, Frieda.

"The big pine tree in front of the house, standing still and unconcerned and alive...the overshadowing tree whose green top one never looks at...One goes out of the door and the tree-trunk is there, like a guardian angel. The tree-trunk, the long work table and the fence," Lawrence wrote.

The author spent most mornings under the towering pine, writing from a simple carpenter’s bench. In 1929, five years after Lawrence's final visit to New Mexico, O'Keeffe came to Taos. She spent several weeks at the ranch and painted the pine tree. Lying on the same weathered bench, she would follow the course of the trunk, up into the branches and far into the twinkling night sky. The scene is immortalized in her famous oil painting, "The Lawrence Tree."

“The Lawrence Tree was painted in a way that questions which side is up,” Jenshel muses. “The painting is currently owned by the Wadsworth Athenaeum in Hartford, CT and their website shows it displayed upside down.” The museum is presumably complying with the artist’s vision, who on numerous occasions commented that the tree should "stand on its head." 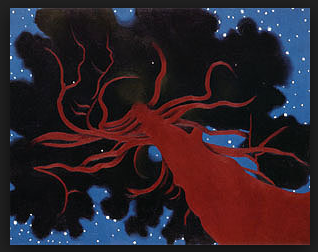 "The Lawrence Tree," oil on canvas, was painted by Georgia O'Keeffe in 1929. It is currently at the Wadsworth Atheneum in Hartford, Conn.

If only trees could talk
“In many cultures around the world, trees are used in creation stories and myths to explain human and spiritual origins,” Jenshel said.

Prince Gautama Siddhartha of India sat under a Bodhi tree until he reached enlightenment and emerged as the Buddha nearly 2,600 years ago. Bodhi trees have since represented the Buddha in art and literature.

“There are trees that have witnessed or inspired history such as the 400 year old Apple tree that illuminated Isaac Newton’s understanding of gravitational force,” Jenshel said. “The Emancipation Oak in Virginia is the site of the first Southern reading of President Lincoln’s Emancipation Proclamation. We will be photographing both.”

Cook and Jenshel met in 1979, were married in 1983, and began collaborating in 1991. They have been interpreting culture and environment for 25 years. Their work has been published in numerous magazines including National Geographic, Conde Nast Traveler, Audubon, GEO, On Earth, The New Yorker, Fortune, and many others. In the fine arts, they have published numerous books of their photographs – their monographs include Travels in the American West, Hot Spots: America’s Volcanic Landscape, and Aquariums.

The ranch then and now
The D.H. Lawrence Ranch was owned by Mabel Dodge Luhan as part of more extensive holdings nearby, although it had been occupied by homesteaders and several structures existed on the property dating back to the 1890s. In giving the ranch to Frieda Lawrence, it became first the summer home of the couple and then Frieda's home until her death in 1956. She had bequeathed the property to the University of New Mexico, its present owner. The Ranch is on the National Register of Historic Places and the New Mexico State Register of Cultural Properties.

The ranch had been closed to the public from 2008 to 2014, but UNM recently opened it to visitors with the D.H. Lawrence Ranch Alliance and the Taos Community Foundation. The gates are open Mondays, Thursdays and Saturdays from 10 a.m. to 4 p.m. through October. Tours are currently self-guided, but caretaker Manny Medina is onsite to answer questions. Starting in 2015, UNM plans to offer docent-guided tours.

UNM-Taos Docent Program
For anyone interested in learning more about the ranch, UNM-Taos is offering a two-month, two-credit course (AAC294-DH) at the Klauer Campus. The course meets Wednesdays from 6 to 8:30 p.m., and focuses on D.H. Lawrence’s life, especially the time he spent at Kiowa Ranch. It’s free to anyone who commits to being a docent at the site during the 2015 season. For information, visit UNM-Taos Docent Program or contact Bill Haller, the course’s instructor: haller@taosnet.com.

The ranch is located 20 miles north of Taos, off Highway 522, just south of San Cristobal. Turn right after mile marker 10; signs show the rest of the way.