Campus community remembers ‘a brother to everyone’
November 09, 2017
Categories: Inside UNM

For Alexander González, the job of University Registrar made sense. As the overseer of student records and class enrollment he could help people—people like the two young Mexican-American twins who arrived at the sprawling Lobo campus nearly three-decades ago.

“Alex was originally going to study medicine,” said classmate and friend Rosa Isela Cervantes, who is now the director of El Centro de la Raza and special advisor to the UNM president on Latino affairs. “He changed his mind because he fell in love with student affairs, student life and development.” 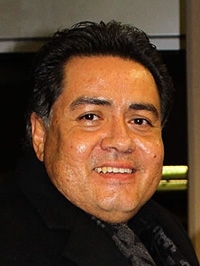 Alex and his twin brother Andrew arrived at UNM in the late eighties. The González brothers were recent graduates of Gadsden High School in Anthony, a small town in southern N.M. They were excited to attend the University and experience dorm life in Hokona Hall.

“I met Alex in the fall of ’92 as a freshman, we graduated together in ’97,” said Cervantes. “We had a really tightknit group here at UNM. We worked together at El Centro as work studies and went up to Santa Fe to get funding for El Centro.”

Alex, Andrew and their friends worked to support fellow Latina/o students. Notably, Alex worked to bring all the separate Hispanic, Latino and Mexican student groups together. The vision became a reality the day Alex served as co-MC for the first El Centro Raza Graduation ceremony honoring Latina/o students as one family.  Raza Graduation is still one of the largest and most celebrated events at the University.

“He was at every cultural event,” said Cervantes. “from Raza Graduation to El Dia de los Muertos. Whatever it was, he was there to support it or create it and made El Centro a home away from home.”

That was only part of the lasting legacy Alex left after his recent sudden passing. Friends and colleagues across campus knew him as someone who, “created spaces on campus for students to feel comfortable in—welcomed.”

Over the years, Alex mentored hundreds of students. He worked to break barriers and open doors for others. He faced racism early in college and didn’t want that experience for other students.

He was ultimately named director of the Scholarship Office which opened the door to the Registrar position he held for the past eight years.

Since his passing, posts on Alex’s Facebook page are a testament to the network of friends he made here at home and across the country.

“Everyone knew him,” said Cervantes. “It’s hard to miss a set of twins as dynamic as Alex and Andrew. If you knew one you knew the other.”

The outpouring of support from all of his co-workers who spent nearly every day with him has been extraordinary and is another testament to his impact on the UNM community.

“Alex was a friend and colleague for more than twenty years,” said Terry Babbitt, associate vice president of Enrollment Management. “We worked closely on many important projects and he helped me organize the first division of enrollment management at UNM. His calm presence influenced me many times when I was not so calm, and I will miss him greatly.”

So will many other Lobos who are in debt to their late colleague.

“We’ll remember him for his student advocacy, warm friendship and baking skills that put everyone else to shame.,” they said. “Our organization is very close and he was the ultimate team member. Alex would have large bowls of chocolate available in his office for co-workers and he was so good at keeping it supplied that there was an outcry when it ran dry. Several of us, accumulated large unpaid chocolate debts to Alex.”

“He is someone whom I have known personally for many of those years, and he has left an indelible impression on the many lives he’s touched. I’ll miss Alex’s calm and cheerful demeanor, and all will miss his advocacy for our students,” said Abdallah.

A memorial service for the UNM community will be scheduled at a later time.