UNM Newsroom / News / The many ways to talk about food

The many ways to talk about food

UNM graduate course explores whether it is true that “we are what we eat.”
May 16, 2016
Categories: Inside UNM Communication & Journalism

Even zombie meals follow some rules. At least that’s the argument Melissa Francis, a graduate student with an interest in zombies presented in her final project for CJ 502. Her project, “Zombies and Brains: Food and Humans as Food in Zombie Films and Television Shows” compared zombie eating habits with those of humans.

This is the first time Kathy Isaacson, a lecturer in Communication & Journalism, has presented a course in food communication. She says the way people communicate about and with food serves as an important contribution to society. Food communication has tendrils into identity, culture, the environment, politics, justice, globalization, and education. Final presentations in the graduate course included songs, demonstrations, presentations and eating – lots of eating. 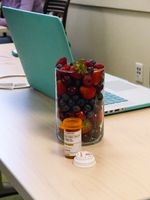 A zombie might approach food in one way. Others, like Carlotta Anweiler, spent part of the semester looking at “Food as Medicine” or “Medicine as food.” Students also looked at the impact of the Monsanto Corporation on food production as (not) addressed in the media, as well as the cultural impact of eating dog meat in Viet Nam and Korea. Food communication meant different things to different people. One student’s research focused on Super Bowl food commercials “Let the Monkey Serve the White Guy First.”

The class created a Food and Communications website, which is still under construction.

Isaacson says that we create, communicate and manage our identities, cultures, relationships, and environment with our food choices.

Want some guidance in thinking about food? Here's a partial reading list from the course.