Johnston is one of the most widely read philosophers today
By Mara Kerkez October 09, 2014
Categories: Inside UNM Philosophy

Johnston was born into a family of philosophers. His father received his Ph.D. in philosophy from Notre Dame, and his paternal grandfather was a philosophy professor at Notre Dame. There was occupational continuity from grandfather to father to son, but in terms of philosophical perspective, discontinuity widened with each generation.

As for Johnston, he was attracted to the teachings of figures from the 19th and 20th century European canons like Kant, Nietzsche and Heidegger. “I saw that my interest leaned toward continental philosophy,” he said.

Whereas continental philosophy examines the synthesis of innovation and history, individuals and society, and speculation and application, analytic philosophy focuses on the analysis of thought, logic, knowledge, language and mind. According to Johnston there is a certain tension between the two orientations.

Johnston’s mother jokes about the three generations of philosophers, calling it the family curse. “She’s convinced that something is going on at the chromosomal level,” Johnston said. “I have a two year old son and I know she’s hoping he’ll be happy being anything other than a professional philosopher.” Incidentally, Mrs. Johnston has declared philosophical discussions off-limits at dinner parties.

As a freshman at the University of Texas, Johnston had considered majoring in political science. He had engaged in competitive debate in high school, and developed a passion for current as well as historical issues at the political and economic levels. But after the first couple of semesters, it became clear that though he had a burning interest in politics, the issues that he found most compelling were ones that best addressed politics in the philosophy rather than political science classes. 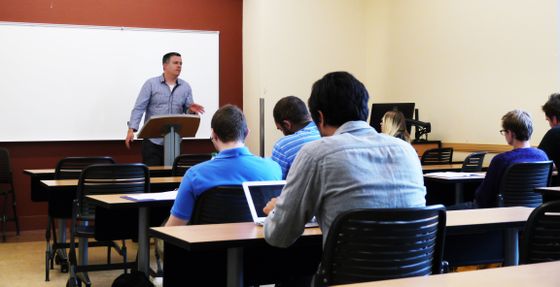 Johnston delivers a lecture to his “Modern Social and Political Philosophy class.

The peripatetic in the classroom
Johnston teaches “Modern Social and Political Philosophy,” which focuses on the relationship between politics and economics, and informs on theory and concepts such as ethics, anarchism and epistemology, which is the investigation of what distinguishes justified belief from opinion.

“What I seek to convey to new students is an appreciation for what philosophy is fundamentally,” Johnston said. “A number of students, especially in undergrad courses, think that philosophy is having opinions about things. My job is to get them to realize that what really matters is not the opinion per se, but whether or not they’re entitled to it, whether they can earn it through being able to establish lines of argumentation that provides solid supporting reasons that they can defend.”

Former student Jesse Schwebach worked extensively with Johnston during his time as a graduate student at UNM. "He clearly comes off as an intellectual powerhouse both in and out of class,” he said. “But I was always struck by the humanity that was coupled with his intensity. His Socratic approach to graduate courses provided us with fertile ground for discussion and his insights really helped us plumb the depths of our philosophical interests."

Nature v. nurture
Philosophy is the oldest profession in the academy, dating back some 2,500 years. It is the longest single stretch of the development of a single discipline represented in various departments and programs today, and continues to be structured around a series of central issues that have a perennial quality to them. For instance, what determines an individual’s character or personality: nature or nurture? The argument was debated in ancient Greece by Plato, who favored nature, and Aristotle, nurture. During the Enlightenment period, Immanuel Kant (nature) and John Locke (nurture) held the same debate. The argument continues today.

Those who agree with the nature side of the argument contend that the DNA and genotype we are born with determine who we are and what personality and traits we will have. Those who agree with the nurture side of the debate contend that we come into this world with minds that are a 'blank slate'. Learning experiences and interactions with the world around us is what develop our understanding of life and the different attributes we acquire.

Transcendental what?
Johnston tends toward the ‘nurture’ side of the argument centering on a theory he calls Transcendental Materialism.

“Transcendental Materialism posits that human beings are not just matter as understood at the level of biology, physics, chemistry, the natural sciences as a whole,” Johnston said. “For transcendental materialism, humans are naturally inclined to the dominance of nurture over nature as well as naturally determined to be free, including free from just being, say, the puppets and pawns of our own nature, whether we think of that as DNA, evolution, genetics or various other environmental factors and forces.”

Johnston added that he “wants to show how that kind of reductionist picture cannot capture much of what we consider to be most essential about ourselves: consciousness, self-awareness, personal identity, freedom.”

Johnston is still walking about as he winds down his lecture and opens up the classroom for questions and discussion. His passion for the material is as evident as his desire to teach young minds.

Aristotle said, “We are all students and teachers in life, some will get the message and some will not. It all depends on who is open, ready and willing to use whatever tools that we are given to guide, help and to support our path on this journey, in this place we call life.”

Johnston received his B.A. from the University of Texas at Austin in 1996 and his Ph.D. from the State University of New York at Stoney Brook in 2001. He is the author of Time Driven: Metapsychology and the Splitting of the Drive (2005), Žižek’s Ontology: A Transcendental Materialist Theory of Subjectivity (2008), Badiou, Žižek, and Political Transformations: The Cadence of Change (2009), Prolegomena to Any Future Materialism, Volume One: The Outcome of Contemporary French Philosophy (2013), Adventures in Transcendental Materialism: Dialogues with Contemporary Thinkers (2014), and, with co-author Catherine Malabou, Self and Emotional Life: Philosophy, Psychoanalysis, and Neuroscience (2013).