García was selected after a four-month search from a diverse pool of semi-finalists that visited the UNM campus last month. He met with a variety of institutional constituencies in small groups and an open forum, giving the campus community an opportunity to engage and ask questions, as well as provide feedback to the search committee. 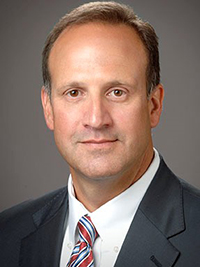 “Bringing Dan to UNM will allow us to ramp up our strategic approach to enrollment,” said Holloway. “Dan has broad experience at a number of universities and a deep understanding of the best practices in bringing the opportunity of higher education to young learners.”

García, a native of the Southwest, begins his new position Sept. 2 and brings a collaborative approach to UNM. “It is an honor to be selected for this position of leadership at The University of New Mexico, one of the nation's premiere research institutions,” said García. “Academic excellence is one of UNM's many strengths and I look forward to working with my new colleagues to continue providing citizens of the State with access to these outstanding educational opportunities."

García fills the position vacated by Terry Babbitt, who was named chief-of-staff for UNM President Garnett Stokes earlier this year. The position has been held on an interim basis by vice president for Enrollment Management and director of Financial Aid, Brian Malone. “Brian has done a great job leading UNM’s enrollment management units over the last year, and I’m very grateful for his service in this role,” said Holloway.

García brings a wealth of experience to the UNM position having specialized in Strategic Enrollment Planning (SEP), a data-intensive process that engages the entire campus and aligns the institution’s enrollment opportunities with its environment. He has facilitated the development of these plans at five institutions of higher education.

Throughout his career, García has been a collaborative leader responsible for providing executive leadership, definition, and organization to the division of enrollment management. He has worked with academic and non-academic directors on campus, including college deans, in the development of campus-wide initiatives for recruitment and persistence. García has developed international partnerships and agent contracts including articulation agreements and memorandums of understanding with domestic institutions of higher education, school districts and external agencies. He also led the first stage of development of a Request for Proposal (RFP) and planning for an enterprise Customer Relationship Management (CRM) tool.

Additionally, he has led various campus departments including the offices of admissions, registrar, scholarships, financial aid and all areas of recruitment including enrollment communications and social media teams, including undergraduate and graduate recruitment/admissions teams, two welcome centers and campus tours.

At UTA García was instrumental in the development of new pipelines of freshman, transfer, graduate, and international students via external agreements, new markets and strategies to attract increasing numbers of inquiries, applications, and enrollments. He redesigned the first-year student admission decision criteria, based on historical outcomes and desired class composition, which also streamlined the decision-making process helping UTA reach its highest historical enrollment of new freshmen and total student figures for Fall 2018, including enrollment of the greatest number of students scoring in the top-five percent nationally on college entrance exam test scores (30+ ACT and 1350+ SAT.)

On the international front, he negotiated and signed 12 international agents to recruit for UTA that resulted in 870 new applications for admission and 216 new international students enrolling for Fall 2018. Nationally, he expanded markets for recruitment with messages tailored to attract various populations.

García is an active participant in a number of professional organizations including the American Association of Collegiate Registrars and Admissions Officers (AACRAO), having served as the chair of the Latino/Latina Caucus and on the board of directors as the Association’s vice president for access and equity. In 2013, he was elected by the membership to serve as its president.

He authored a chapter in the 2008 AACRAO publication, The College Admissions Officer’s Guide, titled “Predicting Enrollments and Yields.” He is a regular presenter at national and regional conferences on the subjects of marketing, data management, recruitment, and retention, particularly of underrepresented student populations.