When people envision Albuquerque, they probably don’t think “modern.” According to Brian Goldstein, assistant professor of architecture in the UNM School of Architecture & Planning, to understand Albuquerque, the city must fundamentally be viewed as modernist.

"It was a city that grew very quickly in the 1950s and 60s with the influx of lab scientists and university professors. It was a city with an eye on innovation and modernism," he said.

Teaching modernism and research
In the fall 2015 semester, Goldstein taught “Albuquerque Modernism,” a seminar and digital humanities project produced by 13 undergraduate and graduate students. In undertaking the project, the students were to look at Albuquerque aside from its Pueblo Revival visage while learning historical research skills.

“I introduced them to the John Gaw Meem Archives of Southwestern Architecture in the Center for Southwest Research in Zimmerman Library,” he said, adding that they also studied newspapers and other sources to contextualize their research.

The Albuquerque Modernism website they produced gives people online access to learn about the city's modernist buildings and landscapes with detailed case studies the student wrote, alongside historical and modern photos. “I hoped they could produce a lasting resource,” Goldstein said.

Researching online and in archives
“The big move in the humanities is to conduct research using digital tools and websites,” he said, adding that while those new methods can provide wider access to scholarship, traditional archival materials remain a rich resource that students might overlook in the digital age.

Goldstein’s students delved into the documents, focusing on the drawings and correspondence produced by prominent local and national architects in Albuquerque in the mid-20th century. They verified that information with other sources and footnoted all references. Not only was it a good experience for the students as future architects, but it also resulted in a lasting resource people can use to learn more about Albuquerque's rich history and built environment. 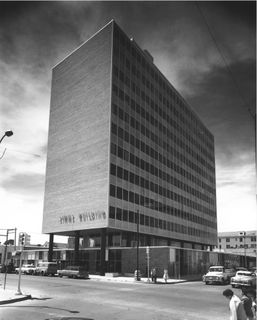 Simms Building
Take the Simms Building on Gold Ave. and 4th St. downtown. Local architects Max Flatow and Jason Moore drew their inspiration for the building from the Lever House in Midtown Manhattan. Its glass 'skin' made it famous as an example of the International Style.

Ryan Morton researched the Simms Building. He wrote, “Flatow and Moore’s design for the Simms Building brought a bold and unique edifice to Albuquerque. Rising to 13 stories, its most prominent feature was, and remains, the full glass and aluminum façades that span its northern and southern elevations, which sparkle in the Southwestern sun.”

In its heyday, the Simms Building (1954) had a restaurant and cocktail bar, which are long gone. New owners, Peterson Properties, purchased it in 2013 and are now renovating it. "They understand the value of its architecture. They are using modernism as a strategy for the remodel. They are adding retail and a first floor tap room and restaurants. They see it as an asset," Goldstein said.

Simms gets a makeover
Mae Peterson, Peterson Properties, said that the goal of the renovation was to keep the basic flavor of mid-century modernism. She remembers details. “When the Simms was first built, there was a mobile over the staircase. It was very geometric and done by a UNM artist. At some point, it disappeared. We tried to track it down, thinking we might duplicate it.” She said that ended up being a dead end.

“Instead,” she said, “we had a mobile Sputnik chandelier built. It is not the same thing, but it is in keeping with the mid-century modern style.” 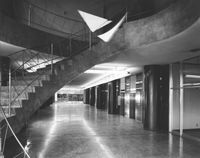 A view of the spiral staircase inside the Simms Building in 1955.

The building features three elevators, all of which needed to be updated mechanically and aesthetically. “We looked for old pictures of the building from the Albuquerque Museum. We put those photos in two of the elevators. In the third, we broke from the historical and used an artistic photograph of the building because we see the Simms Building as a piece of art itself,” she said.

When the Simms Building was finished, the Albuquerque Journal published a special insert about it. “We reproduced some of those excerpts in an informational display in the lobby. Other displays feature information about movies and television shows filmed in the building,” Peterson said, adding that general information about the building is also on display.

First National Bank Building East
The website’s case studies uncover relatively unknown examples of modernism and shed new light on familiar landmarks.  In 1963, the First National Bank Building East, located on Central and San Mateo, was the tallest building in the city at 212 feet and 17 stories. Alexa Murphy, the graduate student who researched this building, wrote that it remains the tallest edifice in New Mexico outside of downtown Albuquerque. 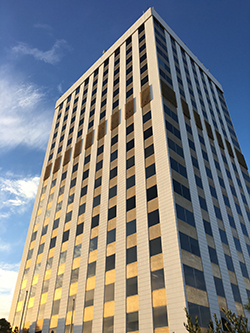 Also designed by Max Flatow, with his architecture firm, Flatow, Moore, Bryan and Fairburn, the building featured special amenities that are long gone today. “The planned social club at the top two floors literally elevated new East Mesa society, complete with views focused on the sprawling urban landscape.” Murphy wrote. Her research revealed that the bank was sited at that location in an attempt to create a new urban and commercial core. The building’s lonely prominence at its corner suggests today that Albuquerque’s commercial development largely took a different direction.

“Albuquerque grew in those decades with the advent of the atomic bomb, car culture and rapid suburbanization. People now look back nostalgically at that time,” Goldstein said. “The time was right to capitalize on that era as part of an educational exercise that might also pique the interest of others.”