Richard Tobin, former director of strategic planning and interim president of the Institute of American Indian Arts in Santa Fe, has been appointed director of UNM’s Harwood Museum of Art in Taos, announced Harwood Governing Board Chair Marcia Winter. Tobin begins his new duties on May 2.

“We couldn’t be more pleased with Dr. Tobin’s willingness to lead the Museum at this exciting time,” Winter said. “His scholarly credentials, his administrative experience, and his familiarity with the museum itself, all make him the ideal candidate to take us forward.”

Tobin succeeds Susan Longhenry, who left the Harwood in July 2015 for a position with the Haggerty Museum of Art at Marquette University in Milwaukee, Wis. 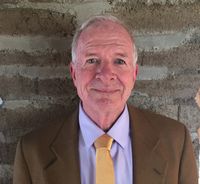 “I have long felt that the Harwood Museum is a real cultural jewel in UNM’s crown,” Tobin said.  “I’m eager to capitalize on the great work represented in the upcoming Mabel Dodge Luhan & Company exhibition, to make sure the university, the state, and the region, come to know that as well as I do.”

Tobin has served as an adjunct faculty member at UNM since 1994 and is currently a contributing faculty member of the Santa Fe University of Art & Design and a regular contributor to THE magazine.  From 1998 to 2009 he was director of strategic planning and assessment at the Institute of American Indian Arts (IAIA), during which time he served as the institute’s interim president from 2005-2007. He has also served as a peer evaluator on national accreditation commissions, including the National Association of Schools of Art and Design, and the Higher Learning Commission of the North Central Association.

Tobin holds a bachelor’s degree in classics from Fordham University, a BFA in sculpture from Syracuse University, and master’s and doctoral degrees in art history from Bryn Mawr College.  His research interests range from classical survival in the renaissance, which he pursued as a Fulbright Fellow in Rome and on numerous other funded trips to Italy, to a critical study of Agnes Martin’s early abstraction.

Founded by Bert and Elizabeth Harwood in 1923, and gifted to the University of New Mexico in 1935, the Harwood Museum is the second oldest art museum in New Mexico. It is particularly known for the works of the Taos Society of Artists, Taos Moderns, and contemporary Taos artists.