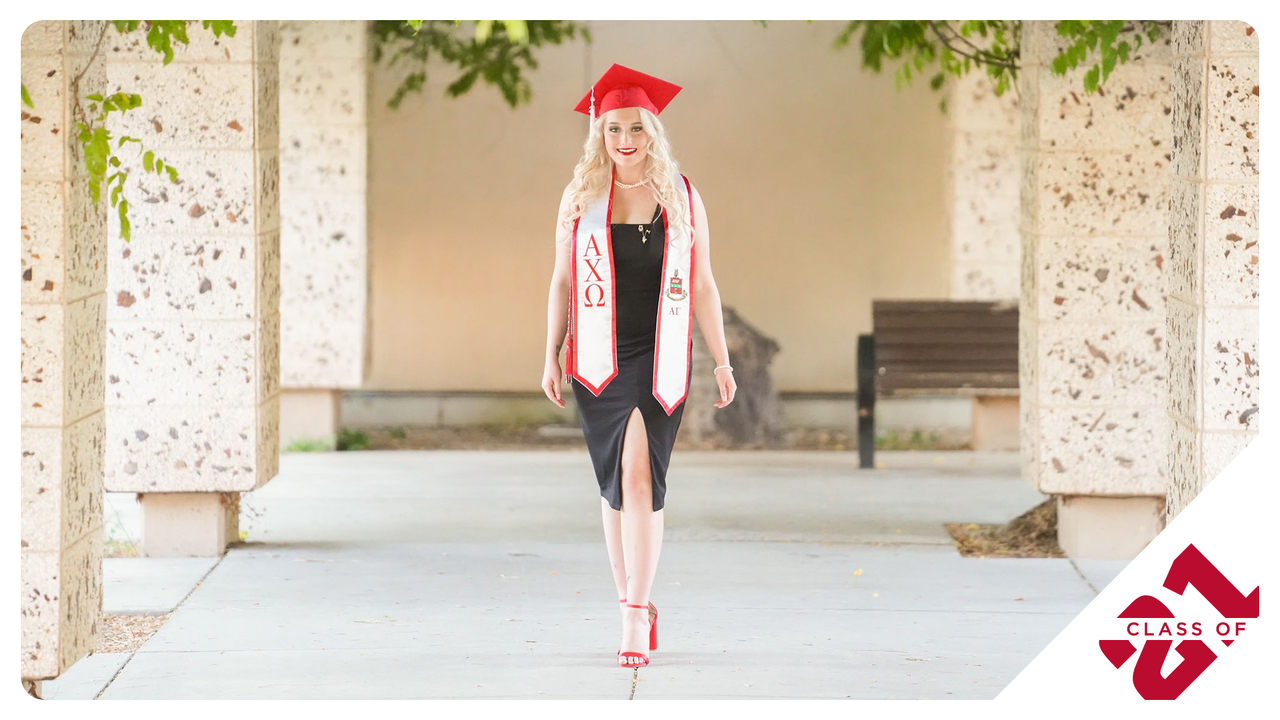 Twists and turns leading to the graduation stage

As a college freshman at Wayland Baptist University, Haleigh Gossett never expected her collegiate path would lead her to walking across the graduation stage at The University of New Mexico.

Gossett, originally from New Mexico, made the decision to attend college out-of-state and received a full ride cheer scholarship at the university in Plainview, Texas. But the second semester of her freshman year, she was hurt – and the injury ultimately cost her the scholarship and her ability to cheer.

Distraught by the loss of her passion, Gossett decided to apply to UNM and continue her education back home in New Mexico.

“So, I’m here processing the fact that I’m injured and never going to cheer again,” said Haleigh. “I’m never going back to my other school, never seeing my Texas friends again, oh and your tuition’s not going to be covered by the state anymore because you left… on top of all that, we had a blizzard.”

Gossett experienced a few setbacks upon arrival to UNM, one being her ineligibility to receive the Lottery Scholarship because she’d left New Mexico. She also had to pick a completely new degree plan, readjust to a new campus that is almost seven times the size of her previous one, and accept being back in her hometown after the excitement of leaving.

Little did she know that after the hiccups it would be one of the best decisions she’s ever made.

“UNM is a great institution, we are highly ranked. I have thoroughly enjoyed my time at UNM and I’m very thankful for the opportunity that I have,” said Gossett.

Gossett has a few tips to help other future students avoid the same pitfalls she fell into.

Tip 1: If you’re from New Mexico, consider staying in state.

Or, if you want to get away consider, getting away in-state.

“Leaving is great but leaving comes with a cost,” she warns. “And the cost is the loss of the Lottery Scholarship, which is a huge financial help.”

Tip 2: UNM is huge, so connect with people through whatever activity makes you happy

Upon her arrival to UNM, Gossett decided to get involved through Panhellenic sorority recruitment. It resulted in her membership in Alpha Chi Omega sorority, where she met one of her best friends.

She also chose to become a Political Science major, motivated by upbringing as an adopted child.

“Family law from what I’ve experienced in the state of New Mexico is not very non-traumatic for the children,” shared Gossett.

It was a process that she wanted to change, so she began an internship with a woman that had handled her adoption and made a plan to attend law school at Baylor University.

During the internship, Gossett realized that law wasn’t the career path for her. It was a path that justifiably would contain a lot of negative, but she’d only want to see the positive. She stuck with Political Science but decided against law school.

Soon after making the decision, another hiccup: COVID-19 hit the U.S. and interrupted her plans for graduation.

Tip 3: Make yourself a priority in life

Knowing that she wouldn’t be able to have the graduation she wanted and deserved, Gossett decided to extend her time at UNM in hopes of attending an in-person commencement.

Gossett recently interviewed for a staff position at Sandia National Labs and is grateful her extra semester led her to this opportunity.

Although her path to graduation wasn’t always clear, Gossett persisted. Through hard work, determination, and focus she will be graduating with a Political Science degree and a minor in Sociology.

Gossett wants future graduates to know that it’s okay to question what they are doing along the way. It’s normal to consider dropping out or switching paths, just don’t give up.