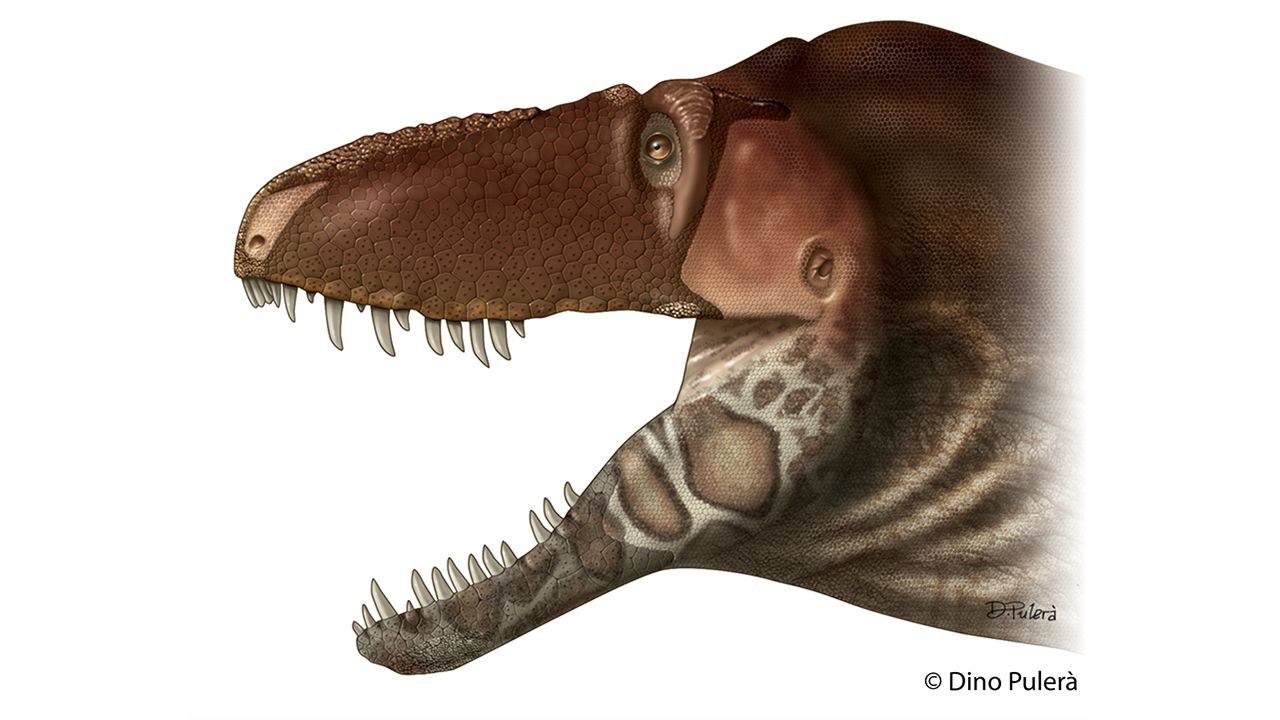 Reconstruction of the outer layer of Daspletosaurus horneri, based on the distribution of texture on the facial bones. The face in tyrannosaurs was covered by an extensive mask of large, flat scales and regions of armor-like skin on the snout, jaws and ornamental horns. The large horn behind the eye was covered by horn, the same material that makes human fingernails. 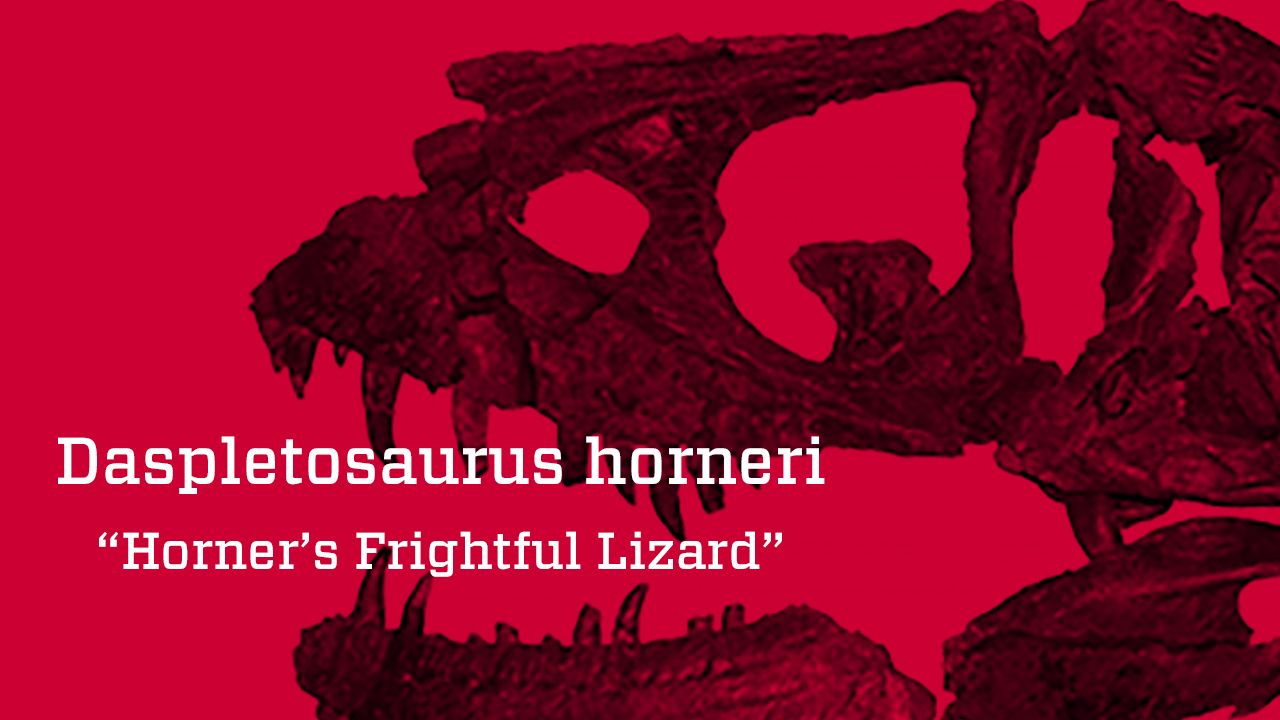 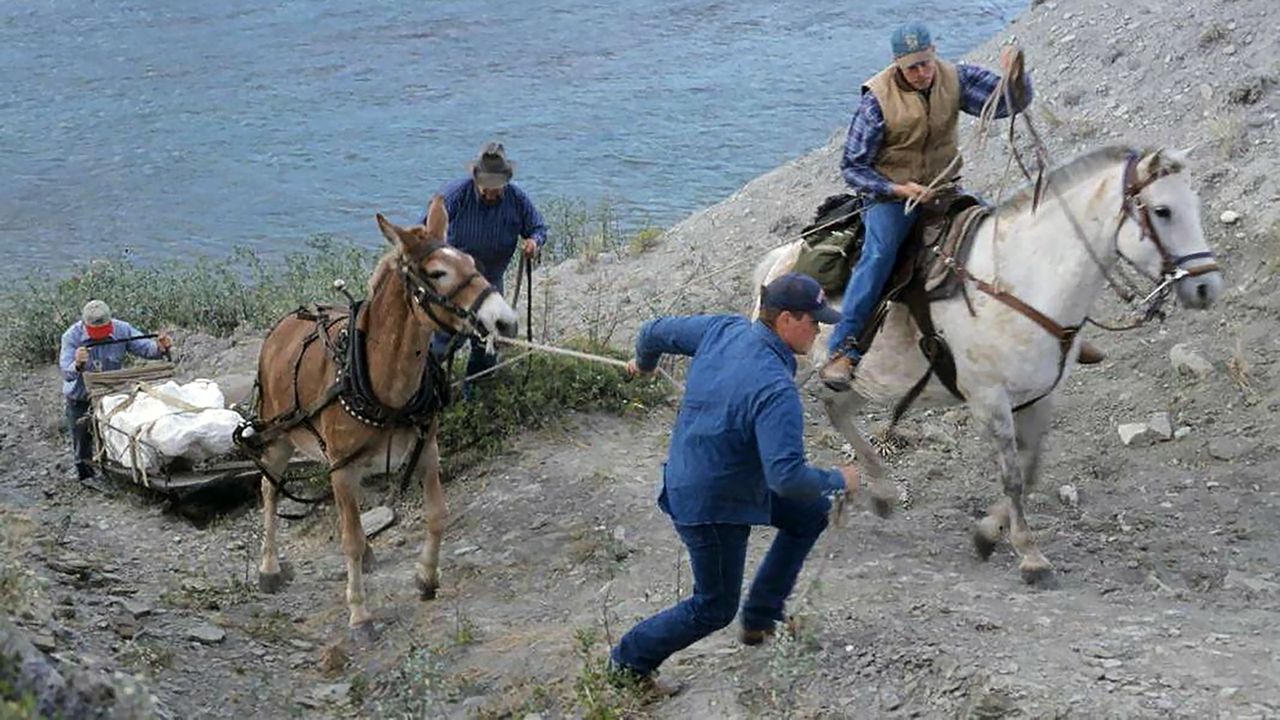 The massive field jackets containing the bones of the adult specimen of Daspletosaurus horneri were hauled out by a mule-drawn sled in August 2001. The crew are the outfitters from the Sun Canyon Lodge.
Credit: David Varricchio 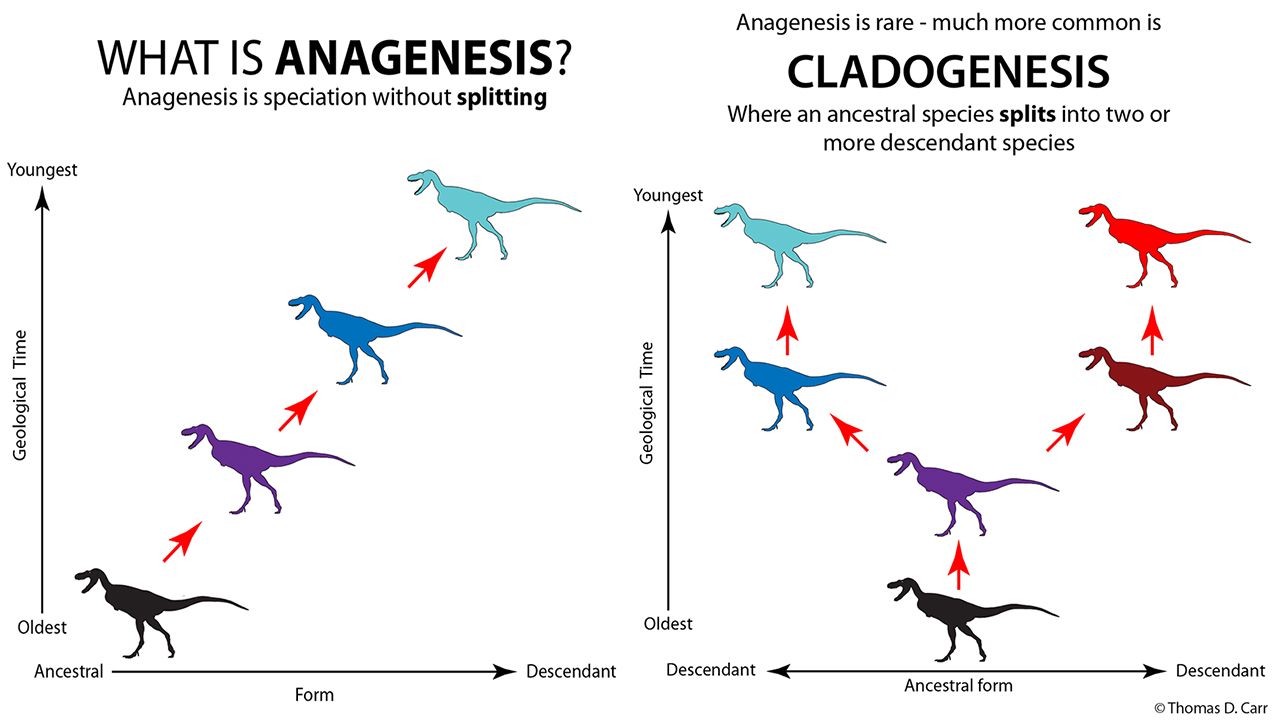 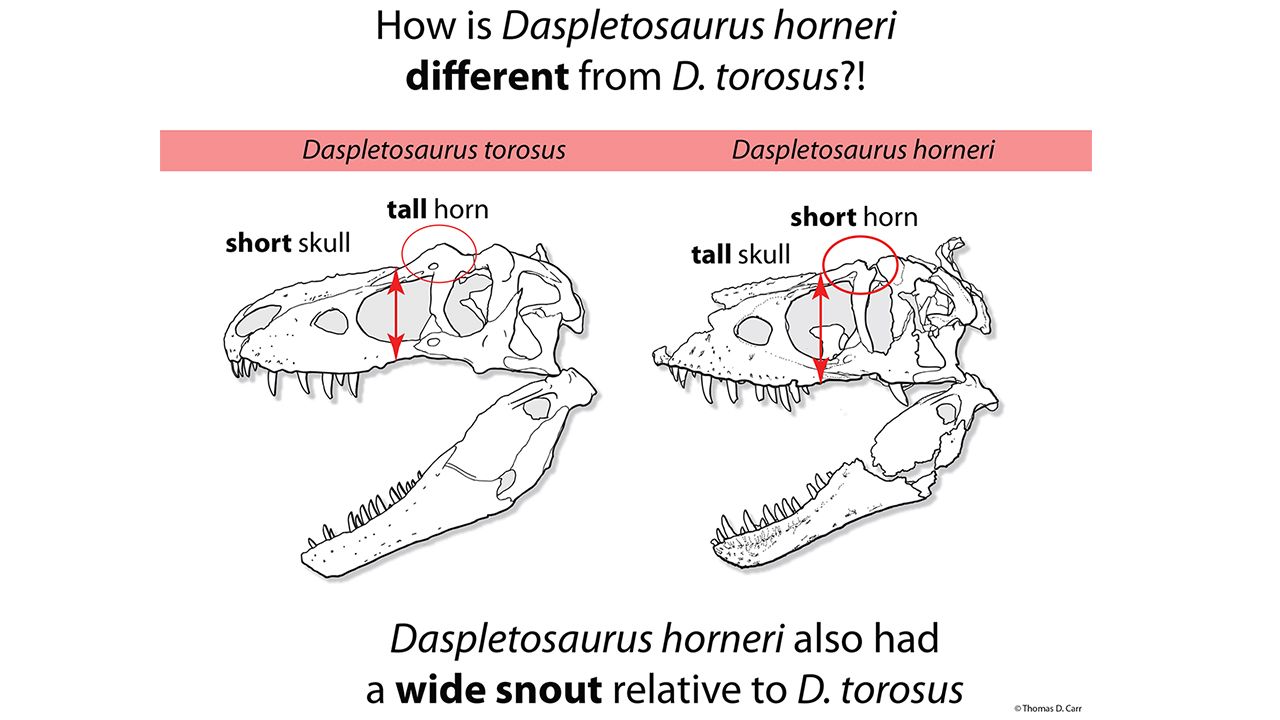 Tyrannosaurs show their sensitive side

A team of researchers, including UNM Honors College Professor Jason R. Moore, has found a new species of tyrannosaur dinosaur — the most popular of the prehistoric creatures.

After the fossils were pulled out of the muddy banks of a Montana river, the team was able to analyze the texture of the facial bones of the new species. The findings suggest that the face of tyrannosaurs was covered in a scaly protective layer with a high degree of tactile sensitivity, similar to crocodiles.

“Being a tyrannosaur, they had really small arms,” says Moore. “They wouldn’t be able to interact with their environment with their hands the way mammals do — find food, build nests, tend to eggs and young. In order to do these things, Daspletosaurus needed to use its feet or head. The discovery and analysis of the tyrannosaur shows that the dinosaur had a developed face sensitivity similar to the sensitivity in our finger tips, suggesting it could use its snout for all those complex ecological interactions, similar to the way crocodiles do today.”

An investigation by a team of scientists from Wisconsin, Australia, Louisiana, Montana and New Mexico has identified and named the new species of the tyrannosaur clan: Daspletosaurus horneri – “Horner’s Frightful Lizard.”

The species is named for the renowned dinosaur paleontologist, John “Jack” R. Horner, formerly curator at the Museum of the Rockies (MOR) in Bozeman, Montana. The tyrannosaur’s name honors his discoveries of numerous dinosaur fossils and his mentorship of so many students that launched them on to accomplished scientific careers. The name-bearing specimens are stored in the research collections of the MOR.

The fossil resources of Montana, where the new tyrannosaur was found, are central to studies of dinosaur evolution.

“Montana, similar to many Rocky Mountain states, has lots of rock exposed at the right time and right environment to contain dinosaurs,” says Moore. “The fossils are found preserved in ancient river channels and flood plains. If you know what you’re looking for, they are widespread.”

The research is led by Thomas Carr of Carthage College’s Department of Biology in Wisconsin, an expert on the evolution and growth of Tyrannosaurus rex and its closest relatives, collectively called tyrannosaurs.

The family tree
In addition to adding a new species to the tyrannosaur family tree, the team’s research provides new information about the mode of evolution and life appearance of tyrannosaurs, specifically the face.

This latest study, published in Nature Publishing Group’s Scientific Reports, found evidence for a rare, nonbranching type of evolution in tyrannosaurs and that tyrannosaurs had scaly, lipless faces and a highly touch-sensitive snout.

“Daspletosaurus horneri was the youngest, and last, of its lineage that lived after its closest relative, D. torosus, which is found in Alberta, Canada,” says Carr. “The geographic proximity of these species and their sequential occurrence suggests that they represent a single lineage where D. torosus has evolved into D. horneri.”

Moore elaborated, “One of the difficulties in demonstrating this style of evolution is establishing that the different species don’t overlap in time. The new radiometric dates we measured help support this temporal separation between D. torosus and D. horneri.”

The research confirms that the ages of the two species shows that the evolution of the dinosaur was slow—happening over a span of 2.3 million years.

The team’s work literally changes the face of tyrannosaurs, which they found was covered by a lipless ‘mask’ of large flat scales and extensive patches of armor-like skin. This conclusion results from comparison of tyrannosaur skulls with those of crocodylians, birds and mammals, and earlier work by other researchers who had matched bone texture with different types of skin covering.

Jayc Sedlmayr, professor at the Louisiana State University Health Sciences Center New Orleans, explained, “Much of our research … was generated from lab based comparative anatomy, where you get arms deep in ‘blood and guts’ dissecting birds—living dinosaurs and crocodilians—their closest living relatives.”

The crocodile connection
“It turns out that tyrannosaurs are identical to crocodylians in that the bones of their snouts and jaws are rough, except for a narrow band of smooth bone along the tooth row,” explained Carr. “We did not find any evidence for lips in tyrannosaurs: the rough texture covered by scales extends nearly to the tooth row, providing no space for lips.”

“However, we did find evidence for other types of skin on the face, including areas of extremely coarse bone that supported armor-like skin on the snout and on the sides of the lower jaws. The armor-like skin would have protected tyrannosaurs from abrasions, perhaps sustained when hunting and feeding.”

The researchers found that, like in crocodylians, the snout and jaws of the tyrannosaurs are penetrated by numerous small nerve openings, allowing hundreds of branches of nerves to innervate the skin, producing a sensitivity similar to that of human fingertips.

This sensitivity is part of a bigger evolutionary story, explained Sedlmayr. “The trigeminal nerve has an extraordinary evolutionary history of developing into wildly different ‘sixth senses’ in different vertebrates, such as sensing magnetic fields for bird migration, electroreception for predation in the platypus bill or the whisker pits of dolphins, sensing infrared in pit vipers to identify prey, guiding movements in mammals through the use of whiskers, sensing vibrations through the water by alligators and turning the elephant trunk into a sensitive ‘hand’ similar to what has been done to the entire face of tyrannosaurs.”