The U.S. Census Bureau recently released its latest statistics from the American Community Survey, which cover the period from 2013-2014 for areas with a population of 65,000 or more.  The statistics show that the number of New Mexicans with health insurance increased by five percent to 85.5 percent from 2013 to 2014, reducing the uninsured to 14.5 percent of the total population.  Increases in public insurance drove the entire increase.

The American Community Survey provides a wide range of important statistics about all communities in the country. The American Community Survey gives communities the current information they need to plan investments and services. Retailers, homebuilders, police departments and town and city planners are among the many private- and public-sector decision makers who count on these annual results. Ever since Thomas Jefferson directed the first census in 1790, the census has collected detailed characteristics about our nation's people.

Health Insurance
The five percent increase in the number of insured in New Mexico was the largest from 2008 to 2014, a period when the rate was relatively steady.  While the number of New Mexicans with private insurance held steady at 54 percent, those with public insurance increased by four percent to 43 percent from 2013 to 2014.

Over time, changes in the rate of health insurance coverage and the distribution of coverage types may reflect economic trends, shifts in the demographic composition of the population, and policy changes that impact access to health care. Several such policy changes occurred in 2014, when many provisions of the Patient Protection and Affordable Care Act went into effect. 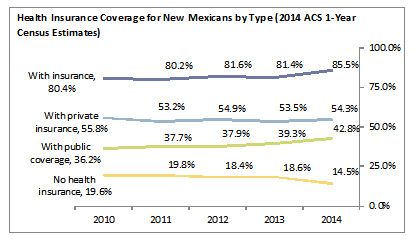 Of the subtypes of health insurance, Employment-based insurance covered the most people nationally (54.2 percent) as well as in NM (43.2 percent). Nationally 16.3 percent receive Medicare benefits compared to 17.8 percent in New Mexico.  New Mexico’s higher than average poverty rates contributed to 27.8 percent of the insured being on Medicaid compared to 19.2 percent nationally.

Inequality (GINI)
New Mexico’s Gini index came-in at 0.477, which is slightly below the U.S. index average of 0.480. The Gini index is a standard economic measure of income inequality. A score of 0.0 is perfect equality in income distribution. A score of 1.0 indicates total inequality where one household has all of the income. The District of Columbia has the greatest inequality with an index number of 0.522, while inequality in Alaska was among the lowest at 0.418.

Migration
New Mexico experienced a population out-flow due to migration with 1,227 more people leaving the state in 2014 than those moving to New Mexico from elsewhere in the US.  The net number of people migrating to New Mexico was positive for Oklahoma, Illinois, Florida, Alaska, Indiana, Wisconsin, and Louisiana, while more people migrated out of New Mexico (than migrated in)  for the following states: Colorado, Nevada, Georgia, Oregon, Utah, South Carolina, Washington, Arkansas. 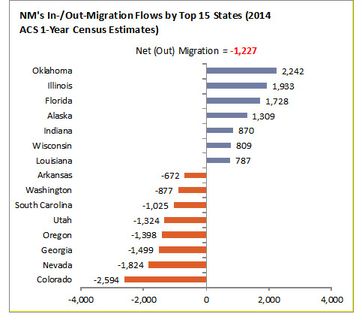 The 2013-2014 American Community Survey statistics are available for the nation, all 50 states, the District of Columbia, Puerto Rico, every congressional district, every metro area, and all counties and places with populations of 65,000 or more. These statistics would not be possible without the participation of the randomly selected households throughout the country in the survey.