Chemical reactions proceed so fast it’s hard to capture the moves atoms make as they break and reform chemical bonds. Now, using a unique experimental approach, researchers at UC San Diego and the University of New Mexico have teased out the intermediate chemical pathways through which a reaction proceeds and identified how energy is distributed among its products.

Their results, along with confirmation by a quantum mechanical model developed by UNM Chemistry Professor Hua Guo, were published online recently by Science in an article titled, “Imaging Dynamics on the F + H2O → HF + OH Potential Energy Surfaces from Wells to Barriers.” The manuscript details a combined experiment/theory study of this benchmark 4-atom, 6 degree of freedom system.

“Once particles collide, everything takes place within a few picoseconds,” said UCSD Chemistry Professor Robert Continetti. “Usually the best we can do is prepare the reactants and collect the products after the reaction is done.”

Fluorine gas explodes in the presence of water vapor. Continetti’s group tamed this volatile reaction a bit by pinning fluorine atoms to water molecules with an extra electron. Then they kicked that electron out with a laser pulse and captured the varied pieces as the complex fell apart and recombined to form hydrofluoric acid and hydroxyl radical. 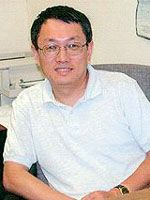 “This is a complimentary work between experimentalists and theorists,” Guo said. “Chemists know how a reaction starts and how it ends, but we don’t know much about what happens in the in-between because it happens so fast. Our job was to bridge the gap between reactants and products by solving quantum mechanics.  Theory provides information on what’s going on in the middle. We can provide the missing link and figure out how we can control the reaction.”

Similar work has been well established for reactions involving three atoms. Because adding an atom to the system dramatically increases the complexity of the problem, this work extends researchers ability to study reactions in minute detail.

“If we figure out the details of such reactions, we might be able to see if we can model combustion better to make it more efficient with less pollution,” Guo said.

Rico Otto, Amelia Ray and Jennifer Daluz in Continetti’s group at UC San Diego completed the experimental work, and Jianyi Ma and Jun Li in Guo’s group at UNM developed the theoretical model of this system.

The Department of Energy supported this research.