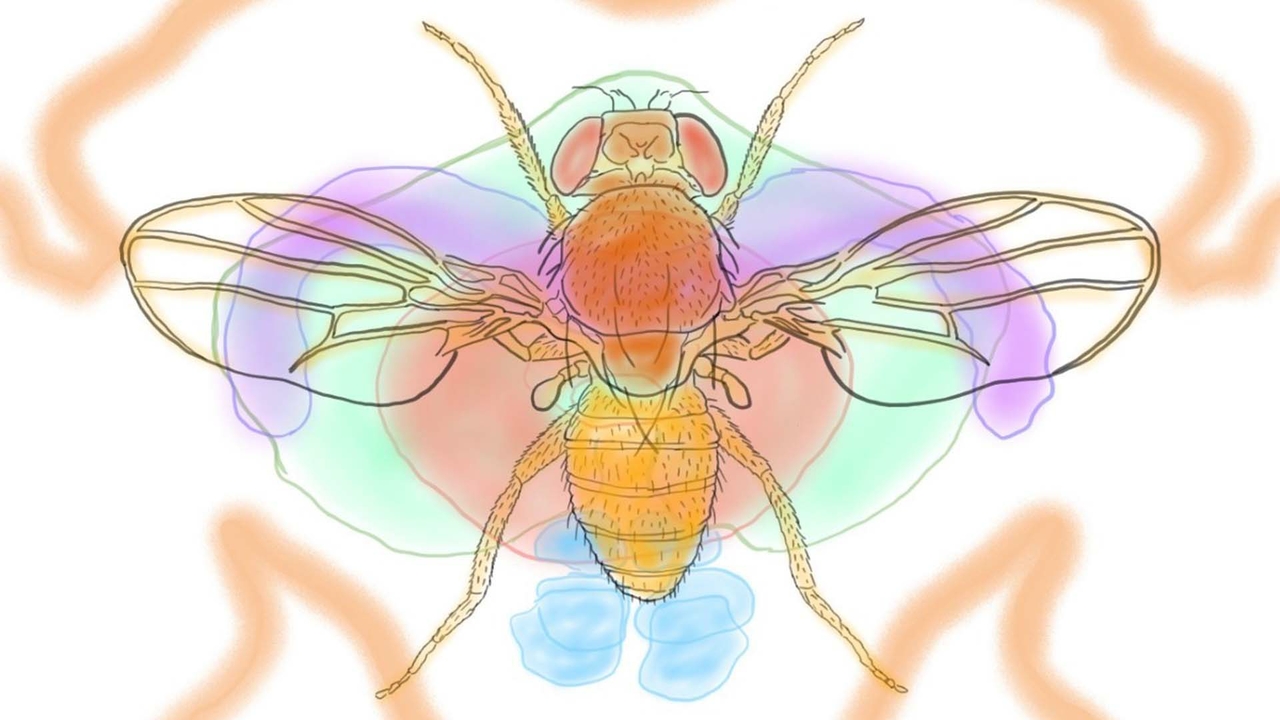 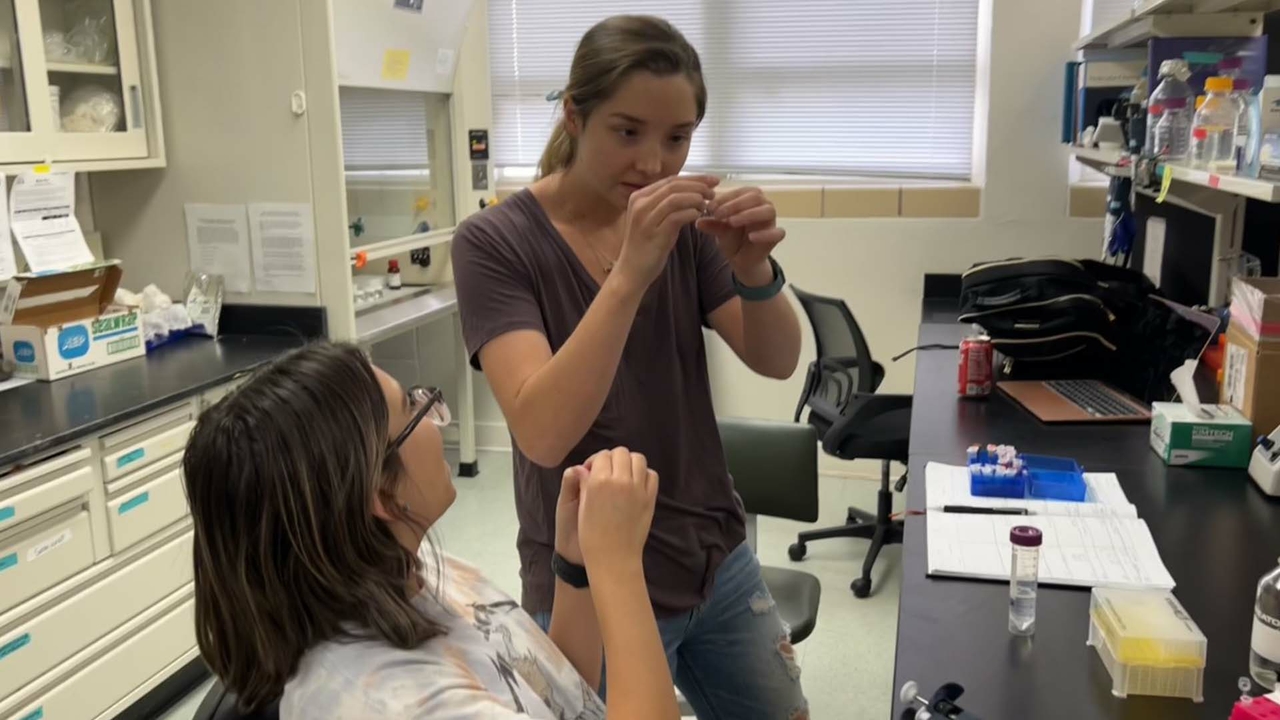 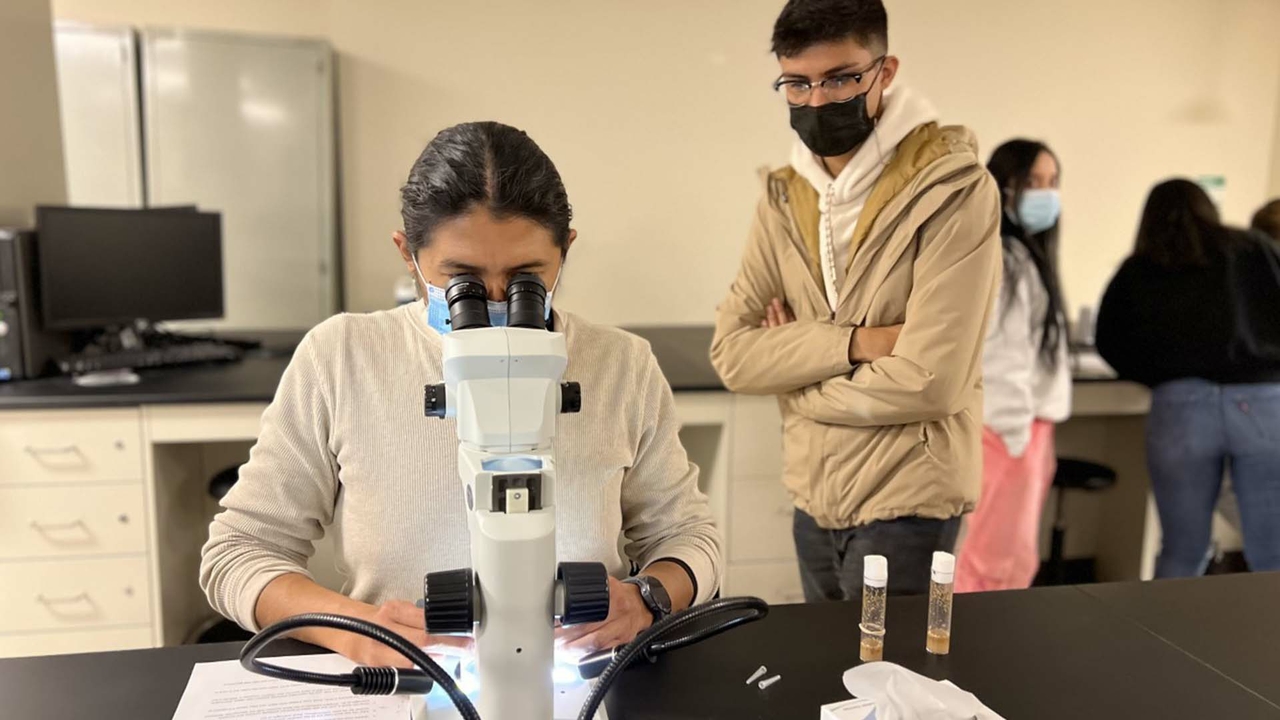 Mubarak Hussain Syed, an assistant professor of Biology at The University of New Mexico, and his students, many of them undergraduates, are investigating the genetic and molecular mechanics regulating neural diversity ̶ from stem cells to neural circuits. The findings will help understand the fundamental principles of nervous system development and potentially to understand and treat neurodevelopmental disorders such as epilepsy, schizophrenia, ADHD, and autism. 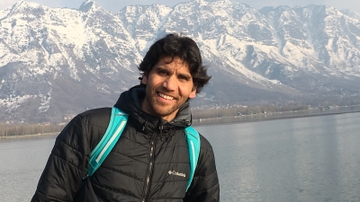 In 2021, Syed received the prestigious CAREER award from the National Science Foundation that allows him to pursue his passions of research, engaging a diverse population of undergraduate students into neuroscience research, and science outreach by visiting schools and training high school teachers and students. His project, Mechanisms regulating neural identity, connectivity and function - From stem cells to circuits, received $1.8 million over five years.

Most of the undergraduates in Syed’s lab are pursuing degrees in Biology and Biochemistry although he’d like to bring in more computer majors interested in solving biological problems.This summer, four high school students are working in the lab as well.

Working with fruit flies is a large part of the research.

“Fruit flies are an excellent model system to understand the genetic basis of nervous system development and function, explained Syed, who has been working with fruit flies for over a decade and is known as the “Fly Guy.”

“Some of my undergrads have published papers and some are in the process of publishing. If they start research in their first year of college, there is enough time to complete a story and publish,” Syed noted. 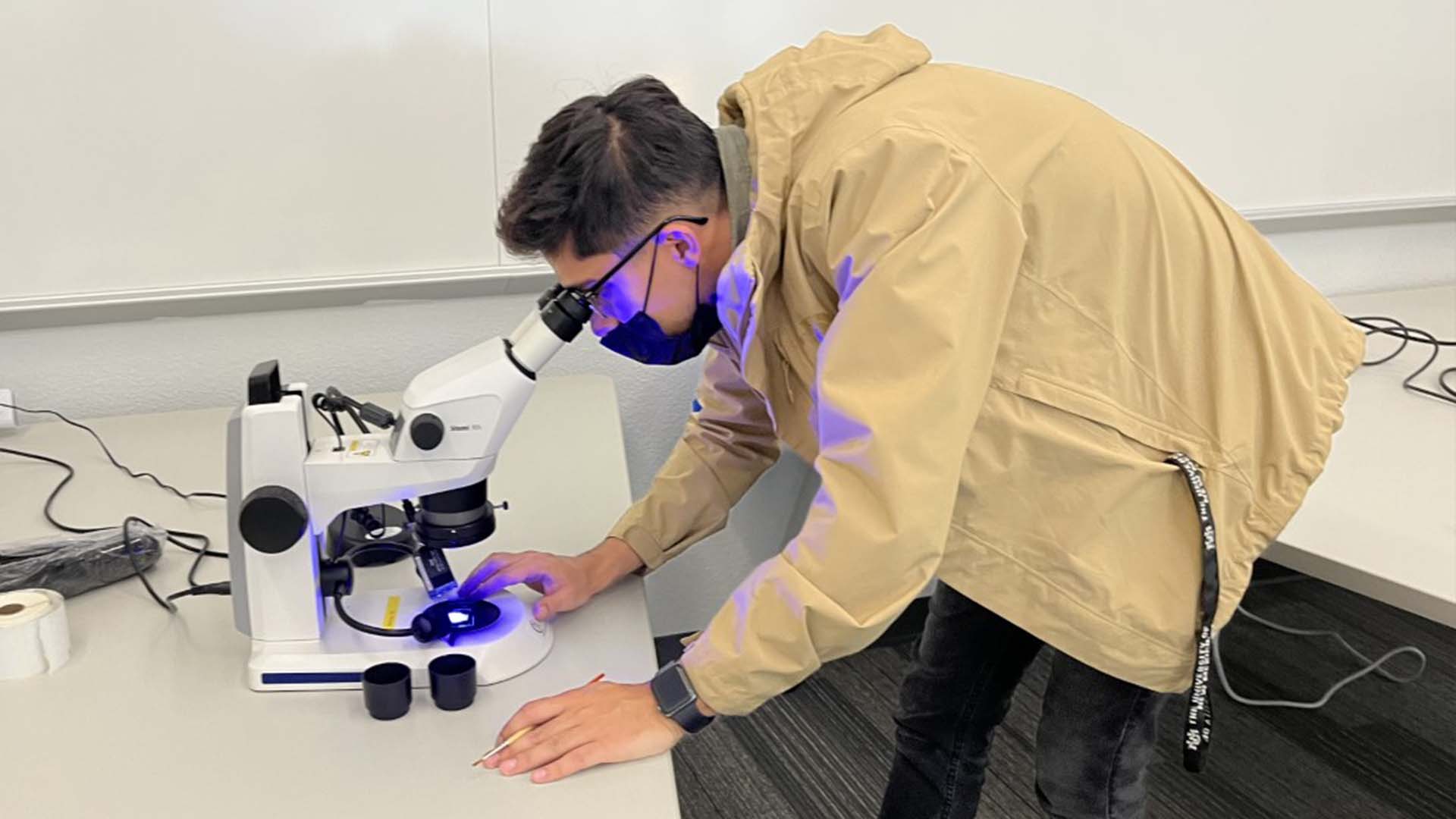 For example, Gonzalo Nahim Morales Chaya, who graduated in Spring 2022 with a degree in biochemistry, worked on two independent projects: investigating how cell cycle regulates the precise temporal gene expression within neural stem cells, and the roles of a conserved gene in forming sleep neurons and behavior. He presented his work at the Genetic Society of America annual Drosophila Research Conference in San Diego and received the Victoria Finnerty Travel Award, which supports conference-attendance costs for selected undergraduate GSA members who are presenting research. He is currently spending a summer in at the University of Oregon where he is part of the SPUR UO program. On his return, he will continue for a year as research assistant and then apply to grad school.

“If I have been able to see further in science, it is because Dr. Syed convinced me that I was capable of it,” Chaya said. “He did not only change my way of thinking about science but has also pushed me to overcome failure and trust my capacities. After working in his lab, I am convinced I want to continue my passion for exploring brain and enter a Ph.D. program."

Alexa Gonzales is a first-generation student from a Mexican immigrant family from a small village near Hatch. She has been working with Syed for over a year and has contributed to the research project focusing on the development of olfactory navigation behavior. She received U-RISE scholarship and will continue her research on the project. Currently, she is spending a summer at the University of Michigan.

“I feel at home when in the lab, thanks to Syed and my Ph.D. student mentor Aisha Hamid for mentoring me and giving me this life-changing opportunity,” she said.

“There is so much research that needs to be done in this world we live in, and this lab is only focusing on neural diversity, which is so complex itself. This is groundbreaking research that is happening here about the body’s most complicated organ, and I’m thrilled to be a part of it."

Lindsey Thomas explained why her research in Syed’s neurogenetics lab (NeuroCURE), a discovery-based class where students learn and pursue original research, is important to her.

“I'm from a smaller town of New Mexico and did not have access to the scientific research. I came to UNM and finally found my niche in research while working on my bachelor of science degree in Biology. I first met Dr. Syed by contacting him to join his journal club NeuroDeGen, which would give me upper-division credit. Once I met him in person, he quickly realized I had very little mentorship for what I want to pursue, and he allowed me to join his NeuroCURE class.”

During the class, Thomas learned about the model organism Drosophila Melanogaster and started a project investigating genes that are homologous, or similar to human genes known to be associated with degenerative neural diseases.

“This project is very special to me since neurodegenerative diseases have been very prevalent in my life. Now, I can work in a lab setting to determine more about the relationship between genes, development and the disease,” she said, adding, “Working with Dr. Syed as my mentor this last semester, I have learned more than any other semesters. There has been so much hands-on work, and everyone that has worked with me in the lab has been so amazing in explaining and teaching me more information.” She plans to stay in the lab for as long as she can and after earning a bachelor’s degree, wants to pursue a Ph.D.

“There is so much research that needs to be done in this world we live in, and this lab is only focusing on neural diversity, which is so complex itself. This is groundbreaking research that is happening here about the body’s most complicated organ, and I’m thrilled to be a part of it,” Thomas said. 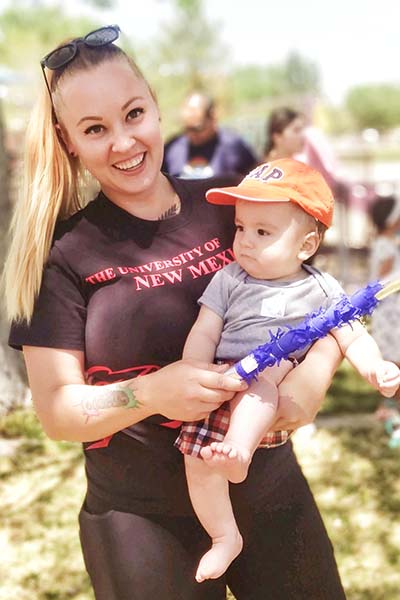 Junior Brandi Hess has received a U-RISE MARC award through the National Institutes of Health for her work in Syed’s lab. She is the mother of an 8-month-old son William and hopes to be a role model for other students.

“Being an undergraduate wanting to get into research can be difficult and even daunting to know where to start,” Hess said. “I had been looking for information and ways to get into a lab or even figure out what I was interested in for quite some time before having the opportunity to get into Syed’s lab. Since being in the lab, even after a short time, I have developed the confidence to do my own research on a topic of interest and learned so much about topics that I have spent years studying in classes. Having a pragmatic approach to learning has been more effective than the time I have spent taking exams and studying in lectures. Alternatively having the space to learn from graduate students has been extremely helpful to navigate what it will take to enter a graduate program.”

Hess said that with the URISE scholarship and the experience she gained through Syed’s lab she plans to apply for a Ph.D. program and continue her research as a career be in academics or a private lab.

Ethan Cato Wilson also graduated this Spring 2022 with his bachelor of science degree in Biochemistry.

“Working in Syed's Neural Diversity lab has been a fantastic opportunity to get the hands-on lab experience I had missed due to the COVID-19 pandemic. Conducting the dissection and mounting protocols on Drosophila larvae helped bridge the gaps in my knowledge of neuronal development. I was also able to meet Dr. Andrea Gomez, who is a Laguna Pueblo neuroscientist with a lab in Berkeley, California. Being a Navajo myself, she has continued my inspiration to pursue a career in neuroscience as there are only a few Native Americans in the pioneering field of science.”

Carolina Valderrama Hincapie is a junior undergrad in Biology. She joined Syed’s class because she was interested in research and had a friend who works in his lab. In class, she worked with genes that were previously correlated with the development of Alzheimer's disease and tested the expression in both larval and adult brains by using immunostaining and genetic techniques.

“I was very lucky to be part of the class, Dr. Syed taught us many things that I did not know about the life of a researcher, and all the things that being a scientist comes with. He had guests in the class, and we were able to ask questions about their research, but also about their lives and what they did to get where they were. After taking the class, I understood that being a researcher is more than being in a lab, and I got even more excited about pursuing a career in research, because there are many things that we do not know yet,” she said.

The students trained in the lab will be able to pursue a variety of exciting science related careers such as academia, industry, science writing, data scientist, medicine, and lab management, to mention a few, Syed said. Beyond his lab boundaries, he has started an informal mentorship program NEURONAL and he suggests all interested students to be part of it.

These training, mentoring, science outreach, and education efforts are part of the Pueblo Brain Science: Building Diversity in Neuroscience program, he added.

See the diverse scientists working in the neural diversity lab here and email FlyGuy@unm.edu  for more information about the programs and research.