Innovative optical fiber, developed by researchers from the University of New Mexico, University of Wisconsin-Milwaukee, Corning Incorporated and Clemson University, was chosen as one of Physics World’s Top Ten Breakthroughs of 2014.

Physics World is the international monthly magazine published by the Institute of Physics. The editorial team recognized 10 achievements from 2014 in a range of topics from nuclear physics to nanotechnology. The top 10 breakthroughs were selected using the following criteria: fundamental importance of research; significant advance in knowledge; strong connection between theory and experiment; and general interest to all physicists.

The citation recognizing UNM’s research breakthrough reads:
Disorder sharpens optical-fibre images
To Arash Mafi and colleagues at the University of New Mexico, University of Wisconsin-Milwaukee, Corning Incorporated and Clemson University for using the phenomenon of “Anderson localization” to create a better optical fibre for transmitting images.

What Physics World says about the research: "The researchers successfully demonstrated that Anderson-localization in an optical fiber could be used for endoscopic imaging. Their demonstration of spatial beam multiplexing suggested the possibility of using easily made disordered optical fibers for image transport and that it can have comparable or higher quality than some of the best commercially available multicore imaging optical fibers, with less pixilation and higher contrast."

“Anderson localization” is named after the physicist Philip W. Anderson, who first theoretically observed the curious containment of electrons in a highly disordered medium, an observation for which he shared the 1977 Nobel Prize in physics, but one that is still under investigation.

Remarkably, the researchers say, the high-quality image transport is achieved because of, not in spite of, the imaging system’s high level of randomness. 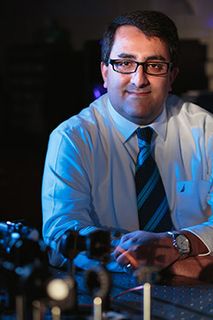 Arash Mafi, associate professor, UNM Department of Physics & Astronomy, and a member of the Center for High Technology Materials at UNM.

“Our results open the way to device-level implementation of the transverse Anderson localization of light with potential applications in medical and industrial imaging,” said Arash Mafi, associate professor, UNM Department of Physics & Astronomy, and a member of the Center for High Technology Materials at UNM.

In addition to Mafi, the research included his former doctoral student Salman Karbasi at the University of Wisconsin-Milwaukee. Together, they harnessed “Anderson localization” to create an optical fiber with a strong scattering mechanism that traps the beam of light as it traverses the fiber. The work was done in collaboration with Mafi's former undergraduate researcher Ryan Frazier at the University of Wisconsin-Milwaukee, with Karl Koch, a scientist with Corning Inc, and John Ballato and Thomas Hawkins, of Clemson University.