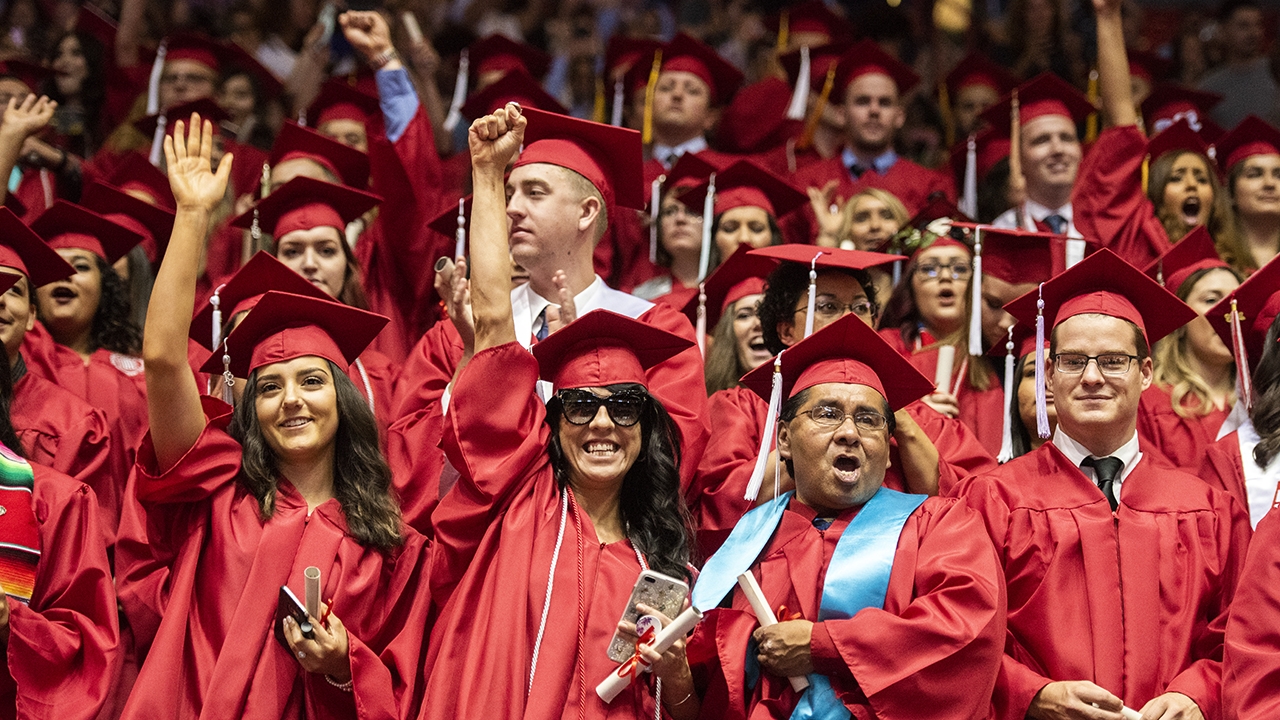 Fall 2019 Commencement on Friday, Dec. 13 at Dreamstyle Arena, The Pit. 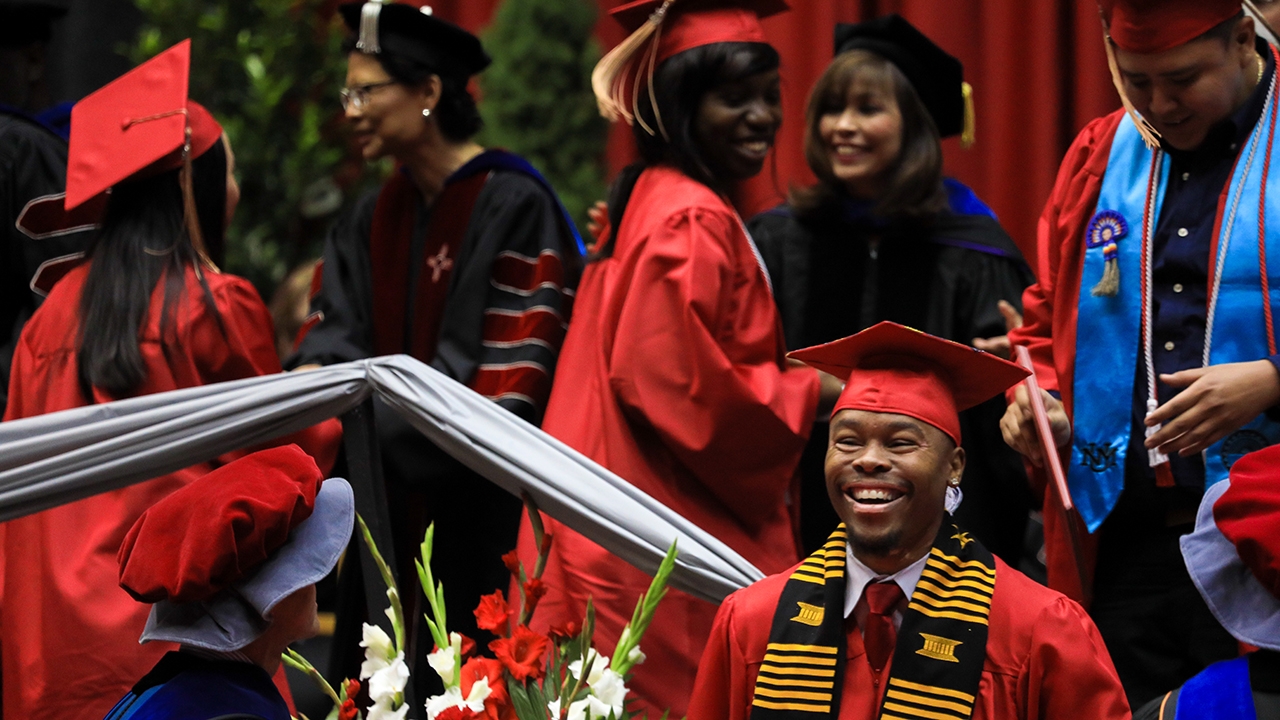 is all smiles after receiving his diploma. 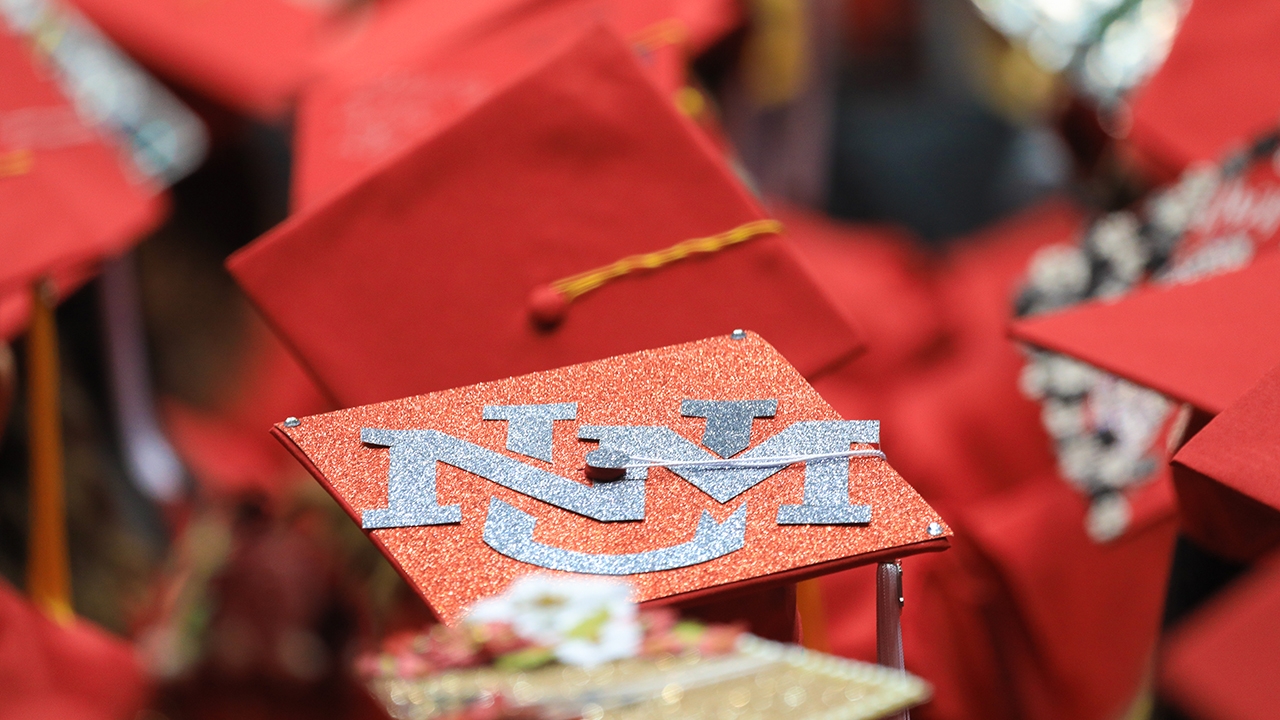 Commencement is a wonderful time of year where one chapter of a person’s life ends and another chapter begins. The University of New Mexico hosts its Fall 2019 Commencement ceremony on Friday, Dec. 13 at 6 p.m. at Dreamstyle Arena, The Pit.

The commencement ceremony honors all doctoral, master’s, bachelor’s and associate’s degree candidates from all schools, colleges and degree-granting programs. Additionally, UNM will live-stream the event on the UNM Facebook page. The event will also be available on Facebook for those who wish to watch a different time.

At the ceremony, vocalist, Curtis Storm will sing the national anthem and the alma mater. Storm, a regular soloist and collaborative musician throughout the Southwest United States, has performed with the UNM Opera, Opera Southwest, St. John’s Bach Project and Quintessence Choral Artists. Storm is set to make his debut with the New Mexico Philharmonic in February.

Fall 2019 Commencement will feature Simon Arkell as the Commencement Keynote Speaker. Arkell, a graduate of UNM's College of Arts and Sciences, received a bachelor’s degree in Economics in 1991.

Arkell initially came to UNM from Australia in 1986 as a pole vaulter on a tuition-only athletic scholarship. While training and competing for UNM, he became a seven-time WAC champion, a four-time All-American and broke the UNM indoor and outdoor pole vault records with marks he still holds to this day 33 years later.

After his competitive days at UNM, he went on to become the Australian and British Commonwealth record holder and champion. He represented Australia twice in the Olympic Games and three times at World Championships. Last month, Arkell was inducted into the UNM Athletic Hall of Honor.

After his athletic career, Arkell went on to become a founder of seven high tech companies in the United States, which have collectively attracted over $100 million in venture capital funding. Today, Arkell is the president and co-founder of Deep Lens, a software company that uses cutting edge Artificial Intelligence (AI) and cloud technologies to help pharmaceutical companies and healthcare providers work closely together to match cancer patients to life-saving clinical trials.

Arkell has also raised nearly $1 million as a program chair for Megan’s Wings, a children's cancer charity whose founders are UNM graduates. Currently, he serves on the boards of the President's and the Business School Dean's Council at Cal Poly, San Luis Obispo, California, where he received an MBA in 1994

President Garnett S. Stokes will be presenting the recognition of graduates with honors and distinction, conferring of degrees in course and the tassel ceremony.

Other individuals presenting remarks include secretary treasurer to the Board of Regents Sandra K. Begay and president of the Alumni Association Alexis Tappan.

In addition to the main commencement, individual colleges, school and departments will host specific graduation ceremonies. For a complete schedule for the ceremonies, department or school/college convocations, as well as additional commencement information, visit Fall 2019 Graduation Ceremonies.