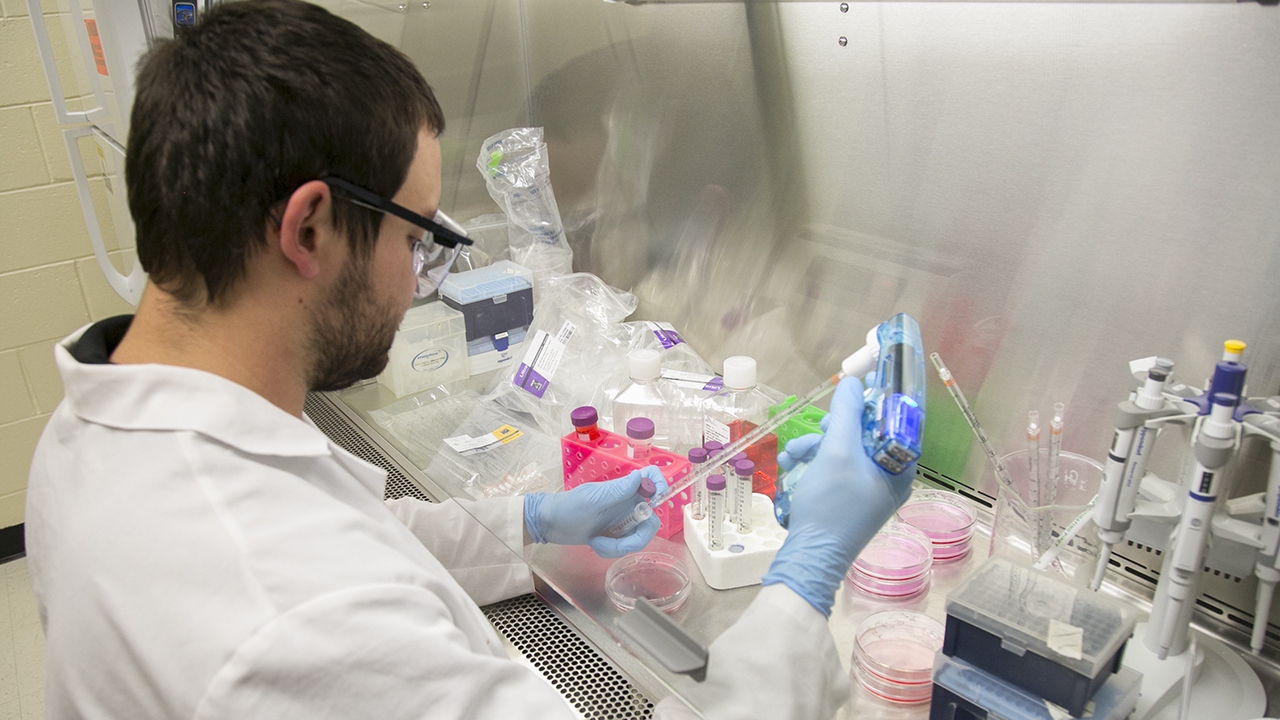 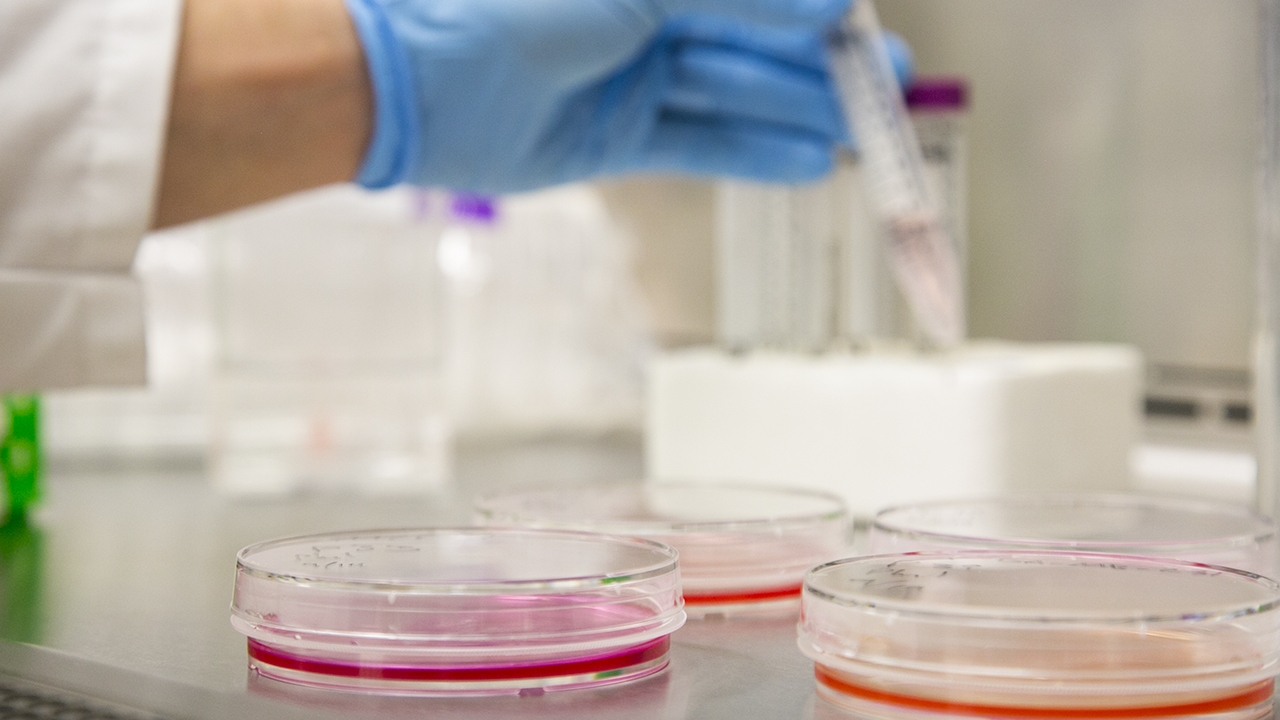 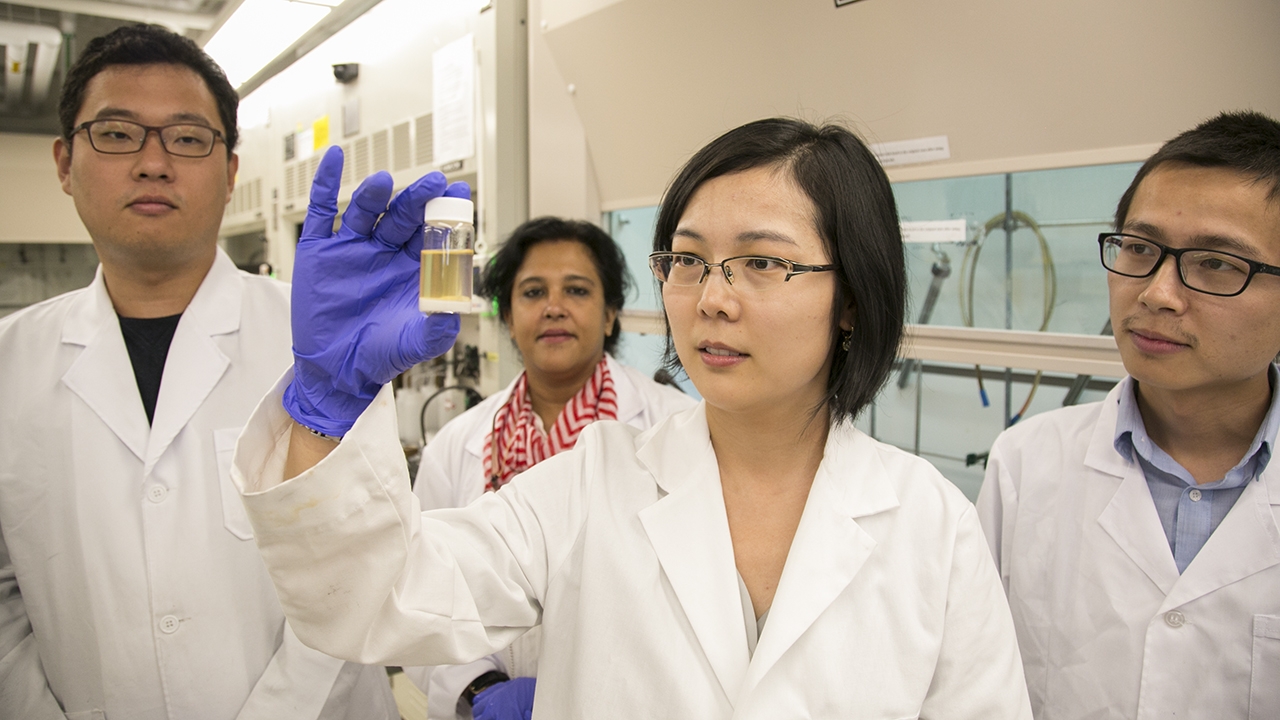 Assistant Professor Lina Cui and her students examine a freshly made molecule that will be used for heparanase research. 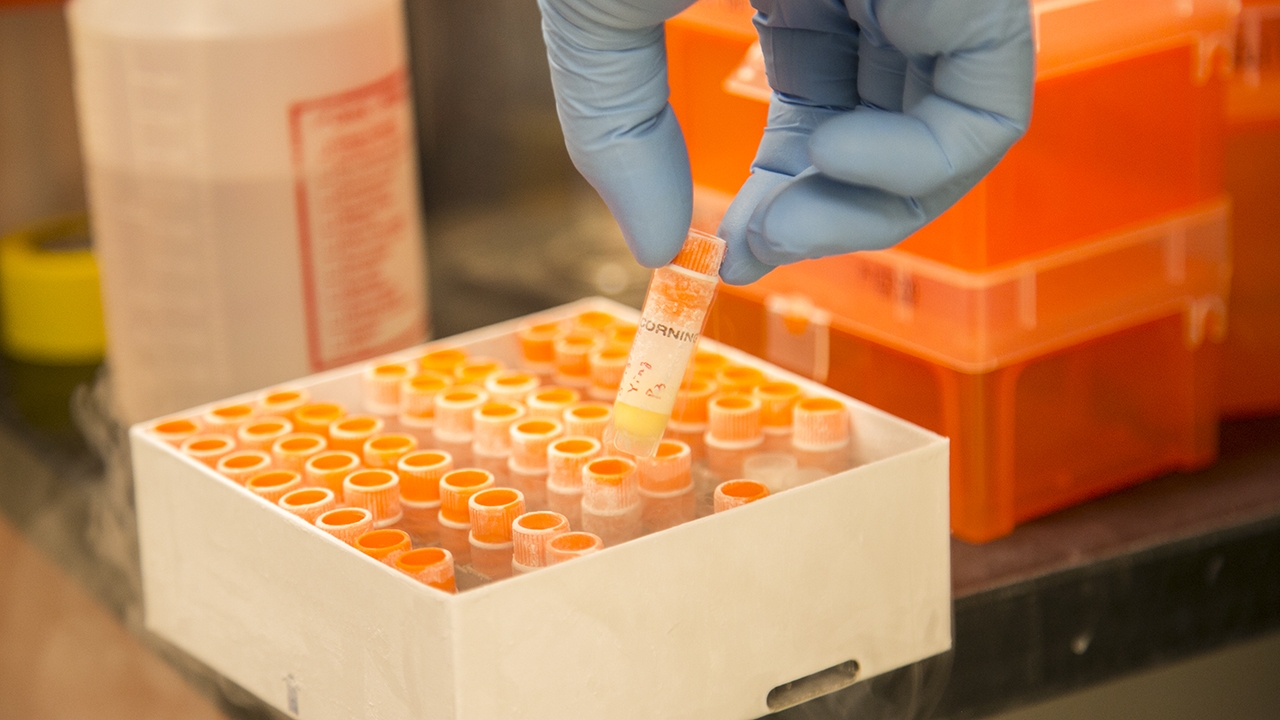 Cui and her students use a variety of cancer cells in their research. Some of the cellular samples were collected from human patients as far back as the 1950s and are still used to make medical breakthroughs today. 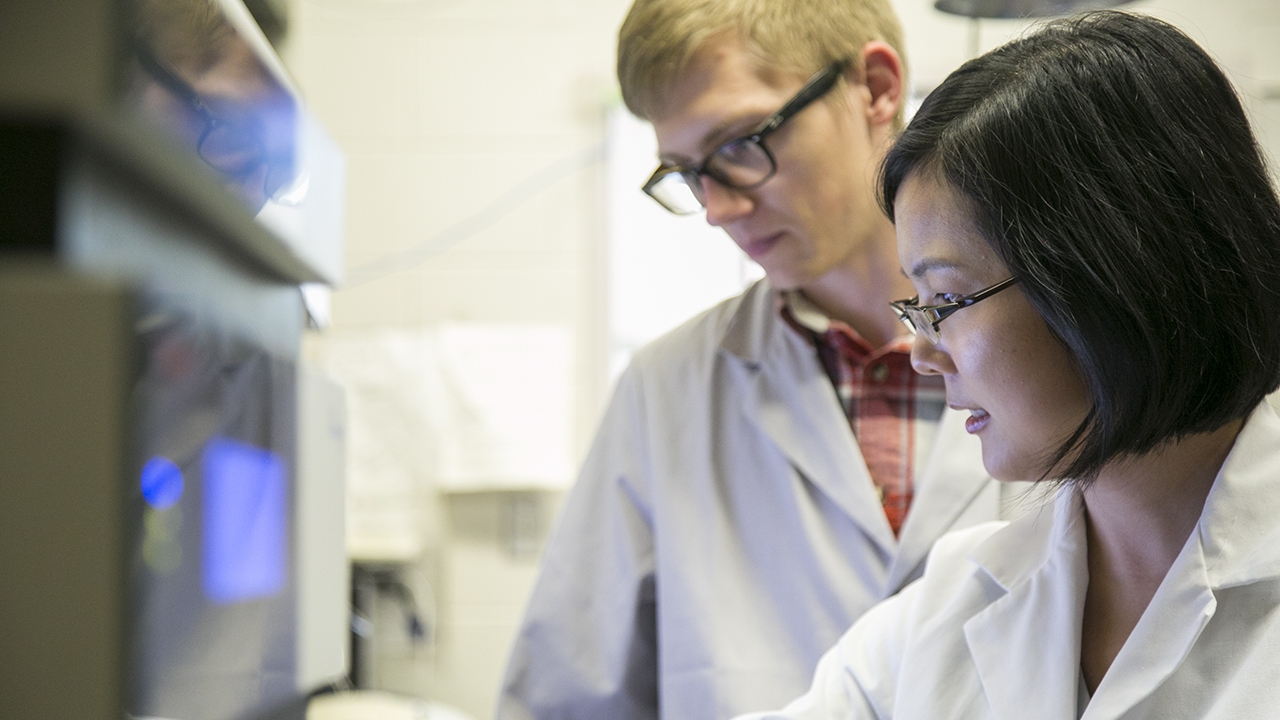 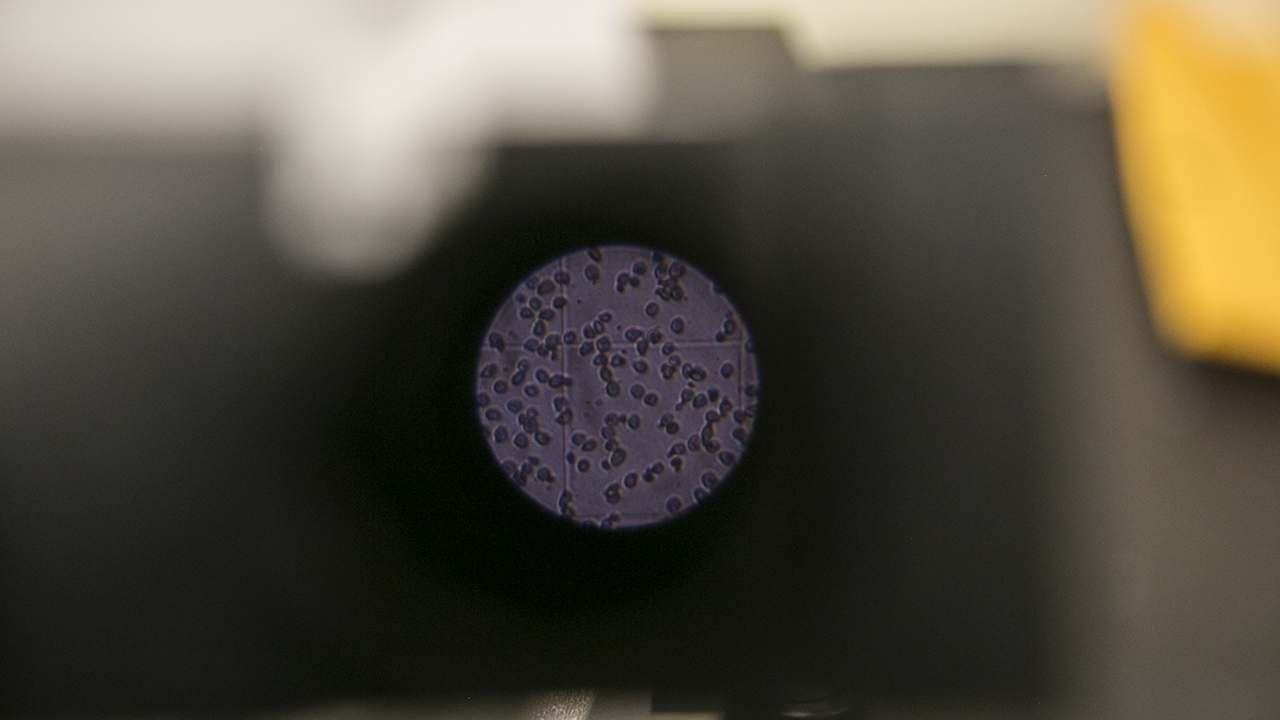 A close-up view of cancer cells through a microscope. 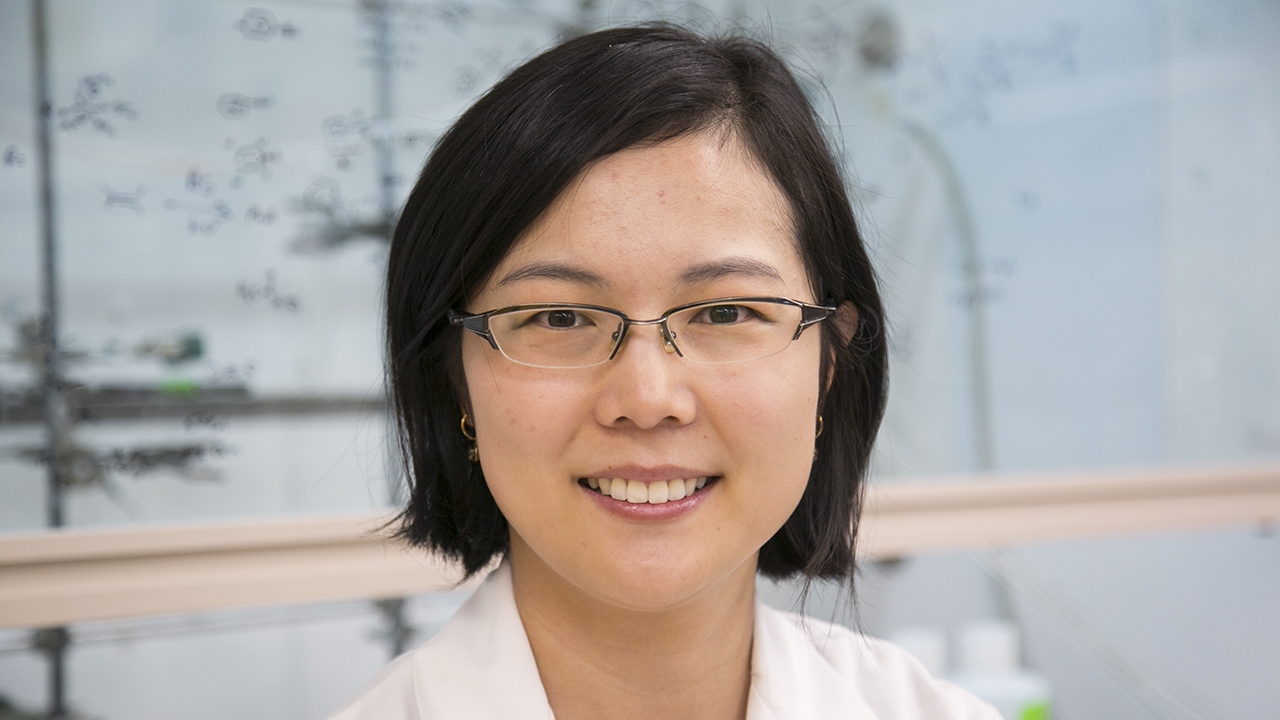 Assistant Professor in UNM’s Dept. of Chemistry and Chemical Biology.

Unlocking the secrets of disease progression

Throughout her academic career, Lina Cui has always been interested in the chemistry of disease in the human body. Now, as a University of New Mexico Assistant Professor in the Department of Chemistry and Chemical Biology, Cui is using her knowledge and expertise to learn more about how diseases progress and how we can stop them.

In support of her research, Cui recently received a renewable five-year, $1.89-million grant from the National Institutes of Health’s General Medical Sciences division. The Maximizing Investigators’ Research Award (MIRA) for Early Stage Investigators (R35) is designed to provide stability and flexibility to early-career faculty members, allowing them the chance to make important breakthroughs, according to NIH. Cui’s project is focused on the chemistry and biological function of the enzyme, heparanase, a molecule very closely related to disease progression, such as cancer.

“It is very exciting to be able to do this work. If something significant comes from our research, it will be incredibly rewarding.” – Lina Cui, UNM Assistant Professor of Chemistry

When first developed in the human body, most types of cancers are contained to one particular area. However, if left untreated, over time certain types of cancer cells begin spreading from the primary site to a secondary area of the body, a process called metastasis. With cancer, once this occurs treatment becomes much more difficult. In fact, metastasis is responsible for approximately 90 percent of cancer related deaths. For Cui, it’s a staggering statistic she hopes to have an impact on.

“There are many early-stage cancers that can be cured right now using different methods like surgical resection, chemotherapy, radiotherapy, immunotherapy and more” said Cui, who is also a member of the UNM Comprehensive Cancer Center. “But, once the cancer migrates, it becomes much more difficult to control. It’s a big problem that we need to solve and hopefully, the research we’re conducting will be a part of that solution.”

Heparanase plays a crucial role in cancer metastasis, as well as in the progression of many other diseases. The enzyme is responsible for a process that essentially breaks down the extracellular matrix holding diseased cells in a specific area. Once that breakdown occurs, the cells are free to travel and interact with other areas of the body.

Cui says that along with the breakdown process, heparanase is also involved in cancer proliferation and angiogenesis, a process of new blood vessel formation. She says the enzyme releases biomolecules that trigger cell or blood vessel growth, so learning more about it will not only give clues on how to limit extracellular matrix breakdown but also possibly shed light on how to slow cancer growth.

“Using chemistry, we want to build molecules that allow us to map the various aspects of heparanase activities,” explained Cui. “Doing this will give us a better understanding of how these enzymes are involved in disease progression.”

Researchers say understanding the precise role of heparanase will give them the knowledge to be able to build molecules into diagnostic tools that target that particular enzyme. The idea is that if they can prevent the enzymes from breaking down the extracellular matrix, they can prevent the spread of disease, giving patients better odds in their fight.

“While we do use cancer models in our initial studies, it’s not our only focus,” said Cui. “Our research will potentially be able to be used for a variety of other diseases too.”

Cui says the MIRA award will go a long way in helping her team make significant progress on this research. Currently, she says there are nearly a dozen post-doctoral, graduate and undergraduate students working on this project, with the potential for more student involvement in the future. And, while Cui and her team do have specific goals and benchmarks in place for this round of funding, she says the award will give them the opportunity to create a large-scale program they will be able to build upon for many years.

“It is very exciting to be able to do this work,” she said. “If something significant comes from our research, it will be incredibly rewarding.”

To learn more about the Cui Laboratory and the research being done there, click here.