U.S. Sen. Martin Heinrich (D-N.M.) announced that at President Trump’s speech tonight to a Joint Session of Congress, he will bring as his guest the acting president of The University of New Mexico (UNM), Chaouki Abdallah.

Abdallah, who was named provost and executive vice president of academic affairs in 2011, also has served as head of the electrical engineering department and a member of the faculty senate. Abdallah initially attended college in Lebanon, but due to the war in his home country he left for Ohio where he graduated from Youngstown State University. 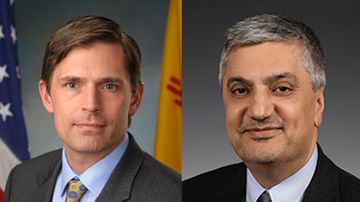 After finishing his undergraduate work, Abdallah attended the Georgia Institute of Technology, where he earned his master’s and doctorate degrees in electrical engineering. In 1988, he took a job as an associate professor at UNM and has called New Mexico home ever since.

“I am honored to be joined by a fellow engineer, Professor Abdallah,” Sen. Heinrich said. “Professor Abdallah’s story highlights the incredible contributions immigrants make to our community. He fled war torn Lebanon in pursuit of a better life for himself and his family. At UNM, Professor Abdallah has demonstrated steady leadership, inspired the next generation of STEM leaders and entrepreneurs, and has fostered an environment that is welcoming of all people. While President Trump’s divisive policies and rhetoric aim to instill fear in our communities, people like Professor Abdallah are a reminder that at its core, America exists because people seeking freedom worked hard to build a better life.”

Earlier this month, UNM released a video as part of a nationwide campaign started by Temple University called “You are Welcome Here,” sending a message to international students and scholars that they are welcome.

“We are richer and stronger because of our many foreign-born students, staff and faculty – and I am proud to be one of them,” Abdallah said.