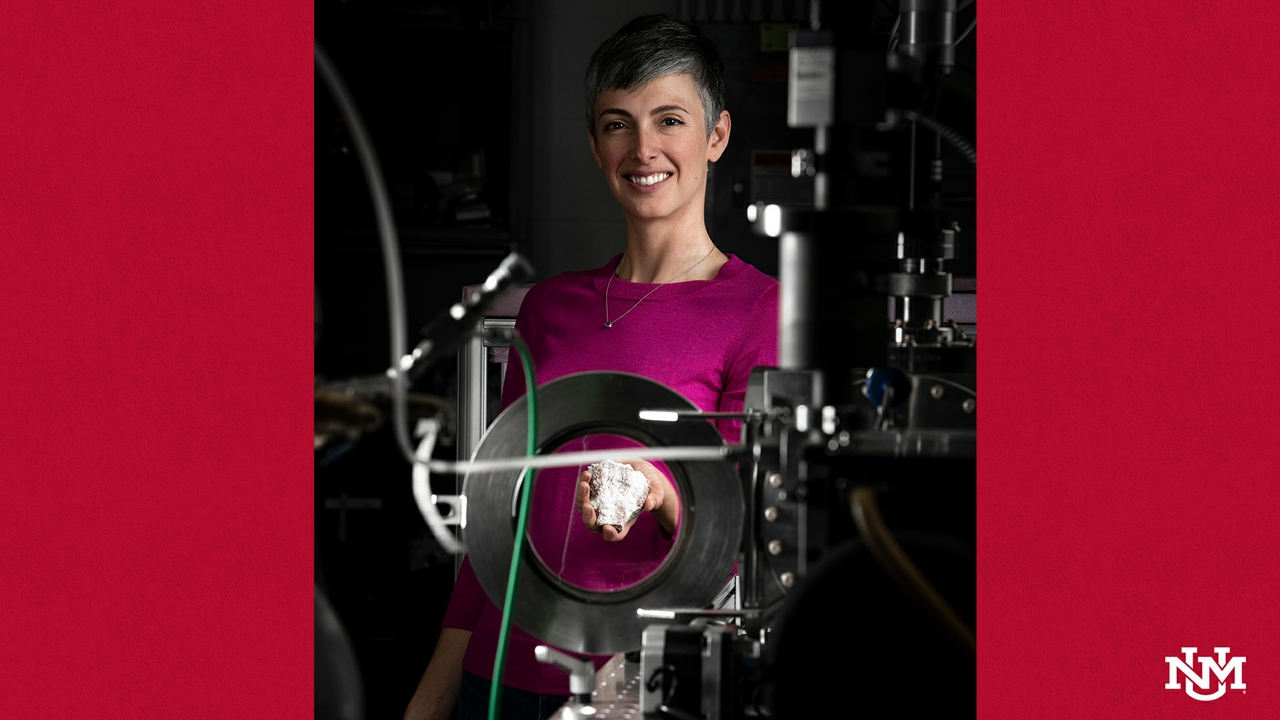 with a duplicate of the ChemCam instrument mounted on the Curiosity rover. 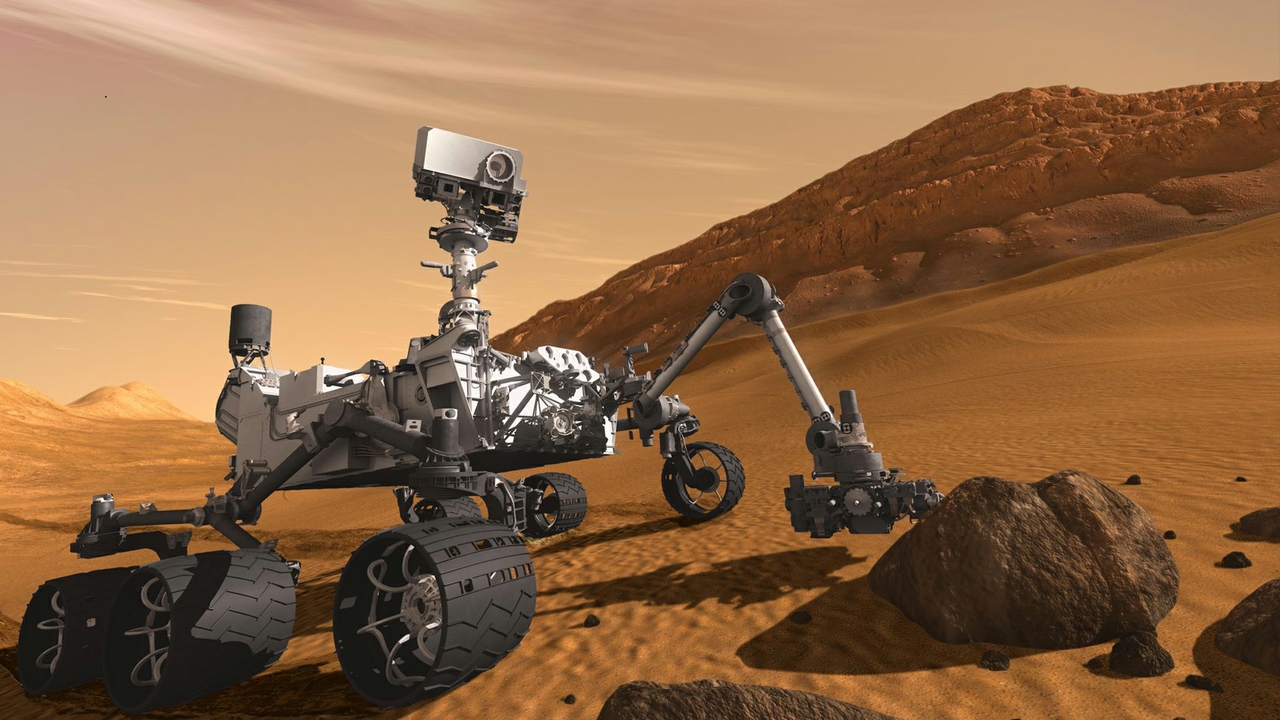 with the ChemCam instrument. 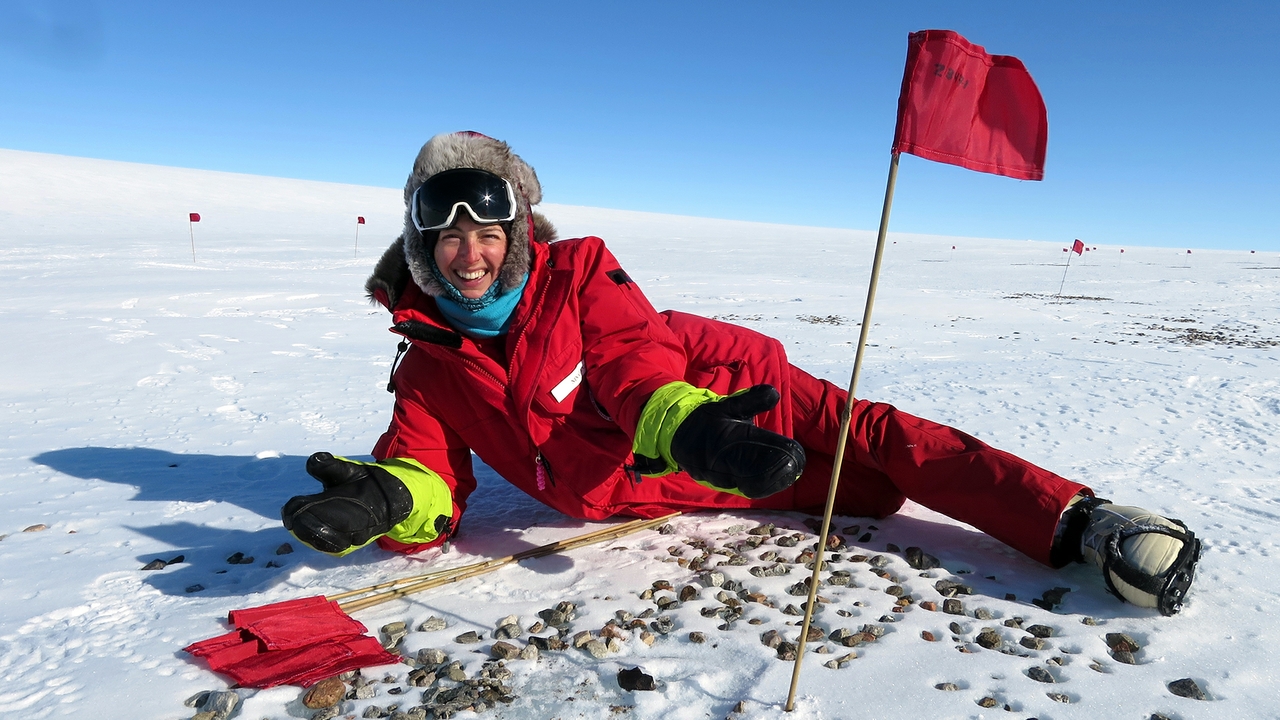 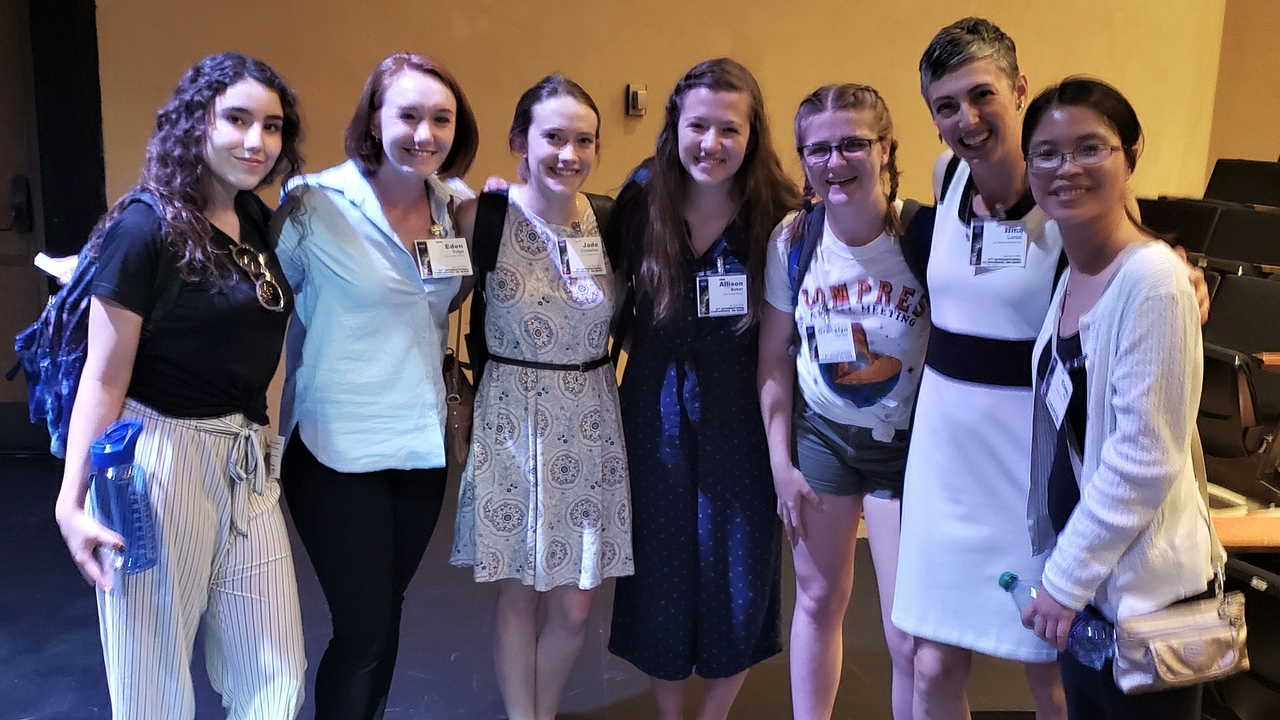 UNM alumna and planetary scientist Nina Lanza with students from UNM at the 9th international Mars Conference this summer at Cal Tech in Pasadena.

UNM alumna Nina Lanza, a planetary scientist at Los Alamos National Laboratory, summarizes her job on her Twitter account, @marsninja, as “I shoot the lasers, pew pew.” Her career isn’t one young girls are traditionally encouraged to follow, but Lanza hopes that will change.

In a recent essay in the Santa Fe New Mexican, Lanza related an experience she had that demonstrated strides still need to be made until outdated stereotypes die.

“Three years ago, I was a keynote speaker at a conference, talking about my job at Los Alamos National Laboratory as a planetary scientist who shoots rocks on Mars with a laser. Part of my job involves helping to guide the Curiosity rover to the appropriate targets. After my talk, I was socializing with a small group of other conference attendees when one of them said, ‘Oh, so we’ve got a woman driver on Mars!’ The joke was made by a man and the others assembled — also men — laughed. I didn’t. I just stood there, speechless. I couldn’t believe that he had just made such a tired, outdated (and unfunny) joke…”

She continued, “… The fact is, despite the great strides women have made in the sciences, stereotypes persist. In the 1960s and ’70s, a social scientist asked 4,807 elementary school students to draw a scientist. Of those, only 0.6 percent depicted a woman. The good news is, today, about 28 percent of children draw female scientists, a significant improvement, but we still have a long way to go — especially when you consider that women earn roughly 34 percent of all doctoral degrees in science, technology, math and engineering.”

Lanza is a role model for any child, girl or boy, who might be interested in science. Besides being involved in the Mars rover project, she has hunted meteorites in Antarctica and told her adventures to Ira Flatow on Science Friday. She’s currently working on a new instrument that will be on the next Mars rover.

She remembered the first time she realized she wanted to be a scientist.

“When I was 7 I went to an outreach event at a university to see Halley’s comet. I lived in Boston and my parents took me. We listened to a brief lecture and then got to look at the comet through a telescope. I didn’t pay attention to the lecture, but I remember seeing the comet through the telescope and, at that moment, space became 3-D to me. The sky was not just this dome above me, but a vast space where things were happening. That’s when I started to wonder what else was out there,” Lanza recalled.

After getting her undergraduate degree in astronomy from Smith College and a master’s in earth and environmental sciences from Wesleyan University, Lanza came to UNM in pursuit of her Ph.D. in earth and planetary sciences.

“I chose UNM because I wanted to work on a space mission—and UNM was one of the only places I could do that. At the time, UNM was (and still is) working in conjunction with Los Alamos National Laboratory on the ChemCam instrument, which would ride aboard the Mars Curiosity rover,” Lanza said. “I applied to UNM and, as soon as I was accepted, I stopped waiting to hear from other grad schools and accepted immediately. I knew this was where I wanted to go. I worked very closely with Los Alamos during my graduate work at UNM on the ChemCam project, so UNM perfectly prepared me for a job at Los Alamos, where I still work today. And I still work on ChemCam, too.”

In her Santa Fe New Mexican essay, Lanza recalled that her undergraduate adviser discouraged her pursuit of an astronomy degree.

“The only time he could muster any enthusiasm for my course selection was when I enrolled in a modern dance class.”

But UNM welcomed her. She joined the Mars project while working on her Ph.D.

“I found my department at UNM to be very egalitarian so my experience there was very positive. I had experienced gender-related issues in the broader scientific community, but not at UNM,” Lanza observed. “I attribute that in large part to my advisor, Dr. Horton Newsom, who was very proactive in making sure his female students had the same opportunities as the men in his program. I think part of that was because his wife worked in a technical field and he saw first-hand her struggles with sexism, so he made it a point to create an egalitarian environment.”

Newsom noted, “We have been very fortunate to have stellar students like Dr. Nina Lanza attend UNM, making it easy to do everything possible to support their progress with their academic career based solely on their capabilities. Dr. Lanza in particular stands out, however, with her dynamic personality and scientific drive to excel. She has also been a wonderful and supportive role model for my other students, which is helping the next generation of UNM students.”

The ChemCam Engineering Operations team was until recently comprised only of women, although a man recently joined team.

“Still, it’s unusual to have a majority-women technical team, simply because engineering still tends to be a male-dominated field,” Lanza said. “What’s important to note is that nobody set out to create a team that was only women. We want the best people. It doesn’t matter if they’re a man or a woman — what matters is that they have the right set of skills and the right personality.”

The ChemCam instrument (which is short for “chemistry and camera”) sits atop the Mars Curiosity rover and uses a laser to zap Martian rocks, Lanza explained. ChemCam’s spectrometers record the light created by this zap through a telescope. This information enables scientists to identify the chemical composition of the rocks.

“Through the same telescope, the instrument takes high-resolution images of the rocks we’ve zapped as well as the Martian surface environment. ChemCam findings have helped scientists better understand the past environment on Mars, which included plentiful fresh water.”

The early days of working on the Mars rover included an unusual time commitment, Lanza recalled.

“For the first two months of the Curiosity mission, I had to move to California and live on Martian time. I learned that I’m very tied to the diurnal cycles of Earth. Adjusting to Mars time was tough. Even though the days on Mars are only 38 minutes longer than Earth, the cumulative effect can be really disorienting. You do a lot of sleeping under your desk. But you get to know your colleagues really well in that environment and you have a lot of fun together.”

But there were unexpected rewards.

“At the Jet Propulsion Laboratory in California, where I was working in those first two months, everyone on the mission gets a free ice cream every day. I’d been working there for six weeks before I figured that out. One day a guy walked in to a 7 a.m. meeting with an ice cream and I was like, ‘Where did you get that?!’ I never missed my daily ice cream after that,” she laughed.

The team is currently working on a new instrument that will travel aboard the Mars 2020 rover, scheduled for launch in July, according to Lanza. Called SuperCam, it’s been dubbed the “Swiss Army Knife” of instruments, because it can do so many different tasks. It has a high-res camera, a microphone, a rock-vaporizing laser, and three spectrometers to examine Martian rocks and soil, looking for materials that could point to signs of past life on Mars. While ChemCam looks at the chemical composition of rocks, SuperCam will look at both the chemistry and the mineralogy, which will provide a lot more information to researchers and reveal more about the past and present surface of Mars.

Though it may sound obscure, there are real-world benefits to the Mars research, Lanza noted.

“One benefit is the technological payoff. Doing work in space is hard, so it requires significant investment in new technology. That technology then trickles down to the everyday consumer. We have GPS and digital cameras thanks in part to space exploration,” she said, adding, “But perhaps more than that, all science—even basic research that seems, at first glance, to be too esoteric to be useful—helps us better understand the world and can result in fundamental changes in the way we live. For example, if it weren't for basic research on the properties of electrons in the 1890s, we wouldn't have electricity (and all of its attendant technologies) today.”

“When it comes to studying other planets, what we learn about other bodies in our solar system enables us to better understand Earth. By studying Mars and learning how its climate has changed—and is changing still—we can better understand our own planet’s past, present, and future. It also helps us understand how our planet and the solar system formed, and how life arose. In short, zapping rocks on a planet 34 million miles away tells us a lot about the ground under our very feet.”

Lanza encouraged young women to experience the joy of going into a scientific field, despite the occasional old-school attitudes.

“I love being in a job where I get to be on the forefront of discovery. Every day I get to see something on another planet that no one else has seen before. I encourage everyone at UNM to take an Earth science class to get a new perspective on our place on this planet and in the universe. For women starting out in the sciences, they need to be prepared to encounter people who don’t think they belong there or don’t want to hear their ideas. I would tell them to keep moving forward in spite of those people. It can be very frustrating, but you need to remember that their bias is not about you and your capabilities. You belong in science and we need your ideas to make the discoveries of the future.”

Recruiting more women and underrepresented minorities into scientific fields isn’t just a “feel-good, check-the-box requirement it’s often perceived to be,” Lanza noted in her editorial. It’s a “critical foundation on which successful teams are built.”

“I see it every day in my work. Science is all about solving problems. The more diverse a team is — not just in terms of gender and race, but also educational background, career experiences, socioeconomic background and the list goes on — the better it is at solving those problems. That’s because all of those experiences that shape us as human beings influence how we look at challenging questions and investigate possible answers,” she observed.

“Exploration has always taken us to new places—both literally and figuratively. When we start out on a journey, we don’t know where it will take us because we don’t know what’s beyond that horizon or around that next bend,” Lanza concluded. “But our experience shows us that, with every new discovery, comes new knowledge that has the power to fundamentally transform our lives for the better. We can’t predict what the next great leap in our understanding of the universe will be and we can’t imagine how it will change our lives—but it’s thrilling to know that we’re all building our future now, together, with the great collaboration that is Science.”