The system is designed to help the military, and other customers, track and defend against drones, or unmanned aerial vehicles (UAV) that may pose a threat to safety or security.

“The military’s been finding that [UAVs are] a real problem because it’s just not worth our tax dollars to shoot them down using traditional methods like rockets or guns,” said Neal, who received his Bachelor of Science degree in Electrical Engineering in 2011 and his Master of Science degree in Electrical Engineering in 2013, both at UNM. “The system that we’ve developed is quite effective at taking these out in a cheap way,” he added.

“You get out of a university what you put in to it… If you pour yourself into your work and really dedicate yourself to learning the material, you might find yourself doing something you never imagined.” – Isaac Neal, UNM alumnus

The Boeing Company hopes to market the technology to military clients and says the system is ready to be evaluated for use. Recently, Neal and his Boeing colleagues participated in a live fire exercise at Naval Air Station Point Mugu in California, where they were successfully able to bring down a UAV using the laser technology.

“I’m real excited to be in a position where I can feel like I can do my part to protect our troops and serve my country, even in a civilian way,” said Neal, who is responsible for writing the computing code that runs the system and controls the beam director and firing capabilities.

The CLWS can track and engage, moving, airborne targets approximately 25 miles away. Neal says the tracking and imaging system make it possible for users to identify a target and determine if it is a threat. Then, the user could decide to engage the UAV and bring it down with the laser system.

“It’s not like Star Wars, you shoot a laser and it causes the ship to explode,” said the former Lobo. “It’s a little less exciting than that. But, you disable it and cause it to crash in the ground.”

Neal began his work at Boeing just months after graduating from UNM. While he says some of the people on his team have decades more experience than he does, Neal says the skills he learned in both his graduate and undergraduate courses have helped him tremendously.

“For the most part, just about every class I took had a good part in getting me where I am today,” he said. “Dr. Rafael Fierro [and] Dr. Chaouki Abdallah were two of the guys that taught me a lot about controls and just implanted some valuable knowledge.” 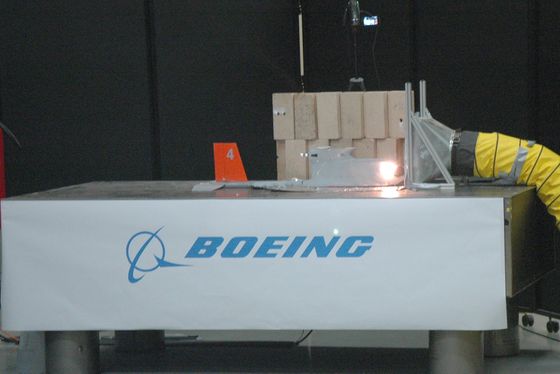 The Compact Laser Weapon System (CLWS) engages its target and in a matter of seconds, the drone is rendered inoperable.

He says while he did learn a lot about specific applications, it is the principles of engineering that really help him in his daily work at Boeing.

Neal says he is grateful for UNM and all the knowledge he gained while he was a student that helped launch his career. His tip for current Lobos, “you get out of a university what you put in to it… If you pour yourself into your work and really dedicate yourself to learning the material, you might find yourself doing something you never imagined."