It is considered by many to be one of the biggest scientific discoveries of the past century. For the first time an international group of researchers, including a University of New Mexico alumnus, have detected the existence of gravitational waves, ripples in the fabric of spacetime, confirming a portion of Albert Einstein’s 1915 general theory of relativity.

"It was amazing, it was amazing,” said Robert Ward, who graduated from UNM in 2000 with a bachelor’s degree in Physics. “I’ve spent so long working in the field, my entire scientific career, and then to have this kind of payoff, it feels really good.”

Currently a research fellow at the Australian National University, Ward is one of about a thousand scientists involved in this collaboration using the Laser Interferometer Gravitational-Wave Observatory, or LIGO. Ward helped develop and test the technology that went into the second generation detector, Advanced LIGO.

“What I did is experimental prototype work on prototyping the techniques that were different between the first and second generation detector,” explained Ward. “My whole career has been spent on technology development for this detector that did detect gravitational waves.” 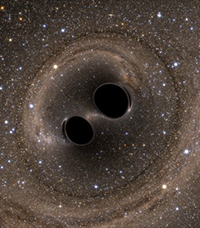 The collision of two black holes holes—a tremendously powerful event detected for the first time ever by the Laser Interferometer Gravitational-Wave Observatory, or LIGO—is seen in this still from a computer simulation.

The waves that were detected are said to be the product of a collision of two, massive black holes, each with a mass at least 29 times greater than our sun. Scientists believe the impact, considered to be one of the most violent events ever recorded, took place nearly 1.3 billion years ago.

Only about 20 years ago though, the idea of discovering gravitational waves and studying physics weren’t even on Ward’s radar. As a freshman student at UNM, the Albuquerque native attended the University on a Regent’s Scholarship and was initially interested in math and economics. But, after taking several introductory physics classes with UNM Professor Emeritus Howard Bryant, Ward said he fell in love with the subject.

“I’m not even sure why I started taking physics classes, honestly,” he said. “But, it was so interesting to me that I decided to switch majors and continue studying it.”

His interests while at UNM didn’t stop at the sciences either. Ward took a number of theatre and acting classes and recalls spending just about all of his time either rehearsing for plays in UNM’s Theatre Department or studying science with classmates in Physics & Astronomy.

“Being able to do both of those things has certainly shaped my life and the way I go through my life,” Ward said. “UNM really did have a tremendous influence on me.”

He credits UNM for giving him the tools to be able to have so much success in the physics world. He said the University provided him with an environment that made it possible to explore all his interests and ideas. Without UNM, he said, he’s not sure where he’d be today or what field he’d be working in.

Ward also had great things to say about a number of his professors in honors, theatre, and of course, physics. Professors David Dunlap and Carlton Caves both had a huge influence on him, not just in terms of physics but also in how to approach life and problem solving.

“They definitely laid the foundation for everything I’ve done up to now,” Ward said. 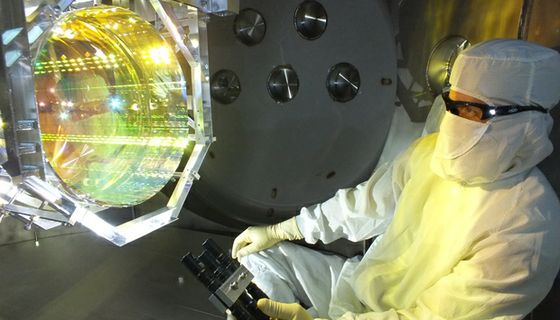 Prior to sealing up the chamber and pumping the vacuum system down, a LIGO optics technician inspects one of LIGO’s core optics (mirrors) by illuminating its surface with light at a glancing angle.

While finishing at UNM, Ward received a Marshall Scholarship allowing him to continue his studies at Oxford University in the United Kingdom. There he received a Master’s Degree in Computer Science while also continuing to study theatre at other nearby universities.

After completing his master’s programs, Ward returned to the United States to attend the California Institute of Technology. It was at Caltech, while working toward his Ph.D. in Physics, that Ward first joined LIGO in 2003.

While it’s obvious that his research has taken him all over the world and allowed him to work with some of the brightest minds in the field, Ward said he’ll always be grateful for The University of New Mexico. A place, he said, that provided him the chance to not only learn and grow as a scientist but as a person, too.