Mattison’s presentation and current work is focused on son or daughter preference among the Mosuo, an ethnic minority group in Southwestern China. She and her collaborators are finalizing a paper about how people change their fertility based on the gender composition of their existing children.

Mattison says this Chinese population is particularly interesting to study because the Mosuo exist as two subgroups. One group living in the mountains is strongly patrilineal in custom, meaning surnames and inheritances are transmitted via sons. The other group, living in the basins below the mountains is strongly matrilineal and passes surnames and material wealth to daughters. 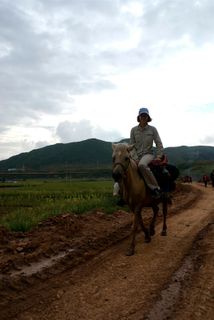 She was interested in whether the patrilineal group would show a preference for sons or whether the matrilineal group would prefer having daughters. She and her collaborators have found evidence that suggests that both groups overwhelmingly prefer an arrangement of one son and one daughter if possible. These ethnic minorities have been subject to a looser version of China’s so-called one child policy, which has allowed for more children among minorities and rural farmers.

Mattison is collaborating with Brett Beheim, a postdoc researchers in Anthropology, Bridget Chak, a former student and Peter Buston, a biologist at Boston University.

This population is fairly famous among anthropologists Mattison said, because they are known for not having formal marriage. But the reality is more complex and family living arrangements are quite variable.

Mattison said she has had a strong interest in sex biased parental investment for a long time. And as she has worked with the Mosuo community she has begun to work with collaborators to address questions the Mosuo have about themselves. Recently one of the groups has been concerned about a home that was sold to a German museum.

One of her collaborators, Tami Blumenfield of Furman University  helped members of the community produce a video expressing complex concerns around a sense of selling their heritage to a commercial enterprise. A National Science Foundation grant the group has will allow them to explore these kinds of changes as tourism continues to affect the daily lives of these people.

Mattison will begin teaching at UNM in the fall of 2016. She says her door is always open to interested students and community members.