Imagine finding evidence of one of the first human groups known to have traveled through the middle Rio Grande Valley in the Southwestern United States.  That's what students in Anthropology 375/575 did this summer as they excavated a Folsom site on a mesa west of Albuquerque. It was named Deann's site after Deann Muller, the student who found it during a survey of the area in 2001.

This is the second summer students have worked at the site, which Research Associate Professor of Anthropology Bruce Huckell describes as a short-term campsite occupied on the heels of a successful bison kill.

The students found flakes from the stone tools the Folsom people shaped at the site, broken tools, tooth enamel and a few small pieces of bone from bison that were their prey.  Huckell is leading the field school, which teaches students the correct scientific techniques for excavating and documenting a site and his enthusiasm is catching as he puts the backbreaking effort of digging for artifacts into a historical context.

Somewhere between 13,000 and 12,000 years ago, a group of Folsom hunters paused near a playa lake just west of the line of volcanic cones that mark western skyline of Albuquerque.

The group had been on the move for months, ranging widely throughout the southwest in an area that is now New Mexico.  Around the playa, they discovered a small group of bison and were able to bring down a few.  The hunters stayed for a short time feasting, processing the meat and hides, and repairing or replacing damaged stone tools.

The hunters are called Folsom people because their distinctive tools were first found near the tiny town of Folsom in northeastern New Mexico.  In 1908, an African-American cowboy named George McJunkin saw large bones jutting from an arroyo after a strong rainstorm.  Eventually the find led to the discovery of a stone spear point nestled among the bones.  His discovery proved that humans had hunted on the continent long before Europeans "discovered" North America and that they were the contemporaries of extinct species of animals.

It's only a guess how many people were in the group that hunted west of Albuquerque.  Historically most hunter-gathers traveled in groups that ranged from 25 to 50, about the size of a large extended family, with some friends thrown in.   The Folsom hunters usually loaded up on high quality stone that could be shaped into good weapons and carried them as they searched for game.

Current day anthropologists are tracking their travel by identifying the geological formations where the hunters gathered the stone.  This is the second Folsom site that has been excavated near Albuquerque by UNM students in the last few years, but neither site can be precisely dated.  So it's not clear whether the Folsom hunters were the same group visiting the middle Rio Grande Valley periodically, or different groups hundreds of years apart who were living the same kind of lifestyle.

In the site now being excavated, flakes of stone chert from the Chuska Mountains more than 300 kilometers away near the Arizona - New Mexico border litter the area, along with China chert, a white stone that looks like broken china from the Zuni Mountains.  Huckell says it looks like the hunters were traveling east, stopped at the Rio Puerco escarpment to pick up chert from the local river gravel and kept moving until they made their kill and stopped to camp.

The first Folsom site in the area was found by Huckell and his dog while they were walking through the brush on the west mesa.  Chuska the dog found the site near what is now Volcano Vista High School on the West Mesa area of Albuquerque.

After excavating that site at the Boca Negra Wash, Huckell says he could tell the hunters were traveling in a southerly direction.  They had collected chert from the Chuska Mountains then moved across the southern San Juan basin.  They carried China chert from the Zuni Mountains, along with another kind of chert called Zuni spotted, which is peppered with mustard-yellow spots.

The group then moved into the Jemez Mountains and picked up chert from Pedernal Peak, a landmark near Abiquiu made famous by Georgia O'Keefe in paintings.  Then they went into the Valles Caldera, an ancient volcanic crater near Los Alamos and gathered obsidian before moving toward the Albuquerque area and making a successful bison kill around a small playa near Boca Negra Wash.

Folsom hunters traveled widely throughout North America.  Their campsites have been found from the Mississippi River drainage to the Rocky Mountains and from Canada to Mexico.  About 30 Folsom sites have been excavated so far.  Huckell says there is no way to tell whether the hunting groups traveled the continent or stayed in one general area.  There are just too many gaps in the record.

Anthropologists speculate that the smaller groups met up occasionally to conduct ceremonies, exchange information, and allow members of the groups some social interaction, but hard evidence for this hasn't yet been found.

Technological advances are only now beginning to allow anthropologists to document areas that were once speculation as they piece together a picture of life in North America as humans began to populate it.

Huckell working with former UNM undergraduate student Patrick Mullen and Zachary Sharp, professor of Earth and Planetary Sciences have have concluded those ancient bison were eating warm season grasses, much like the diet of current day bison in southern New Mexico.

In collaboration with Vance Holliday, professor of Anthropology and Geosciences at the University of Arizona, Huckell and the anthropology students excavated sediment from a trench cut into the playa lake bed.  The next research step is to try to identify precisely what plants grew in the area, and which grasses were present at the site around ten thousand years ago.

Huckell's area of scientific research is hunter-gather paleoecology of the Paleoindian and Archaic periods of the U.S. Southwest.   He has investigated such sites throughout the Southwest and Midwest, and says he is always interested in the unusual things that people find.  He can be reached at bhuckell@unm.edu

Photos of students working at the site. 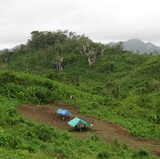 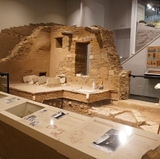 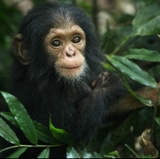