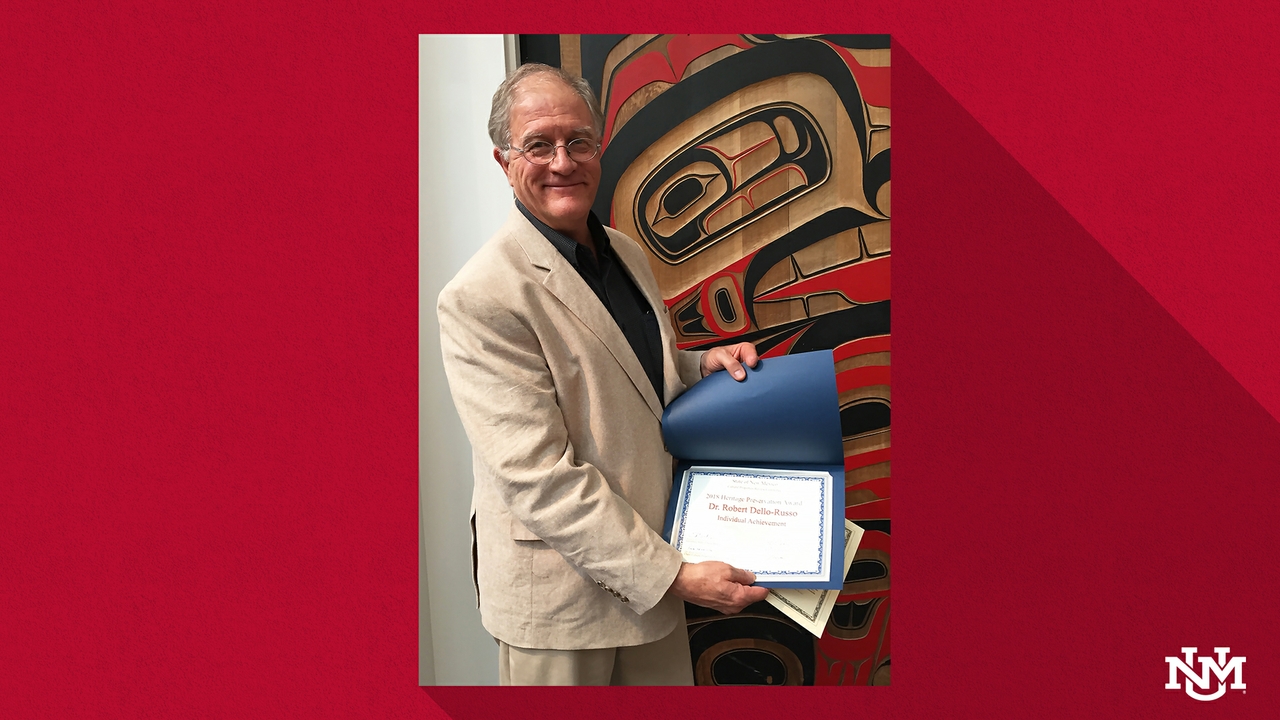 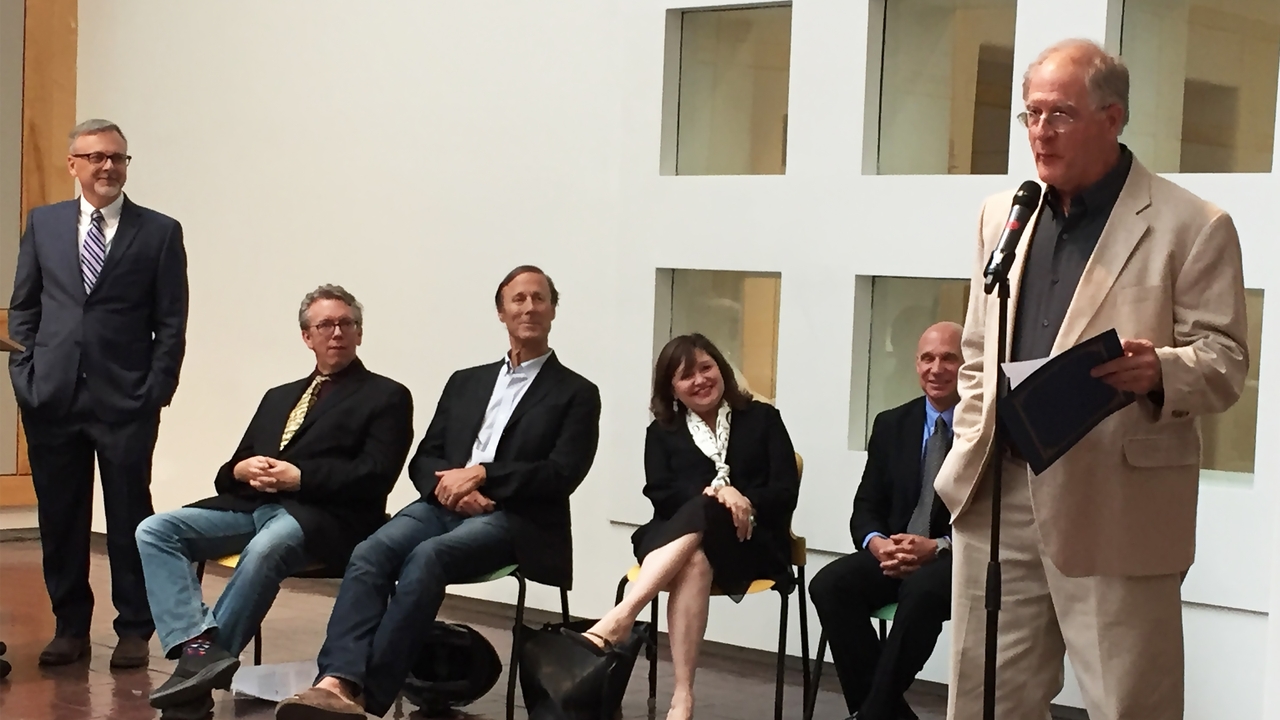 After receiveing the award from archaeologist Matt Bandy and Cabinet Secretary of the New Mexico Department of Cultural Affairs Veronica Gonzales, Dello-Russo reminisced about his 30 plus years working in New Mexico. 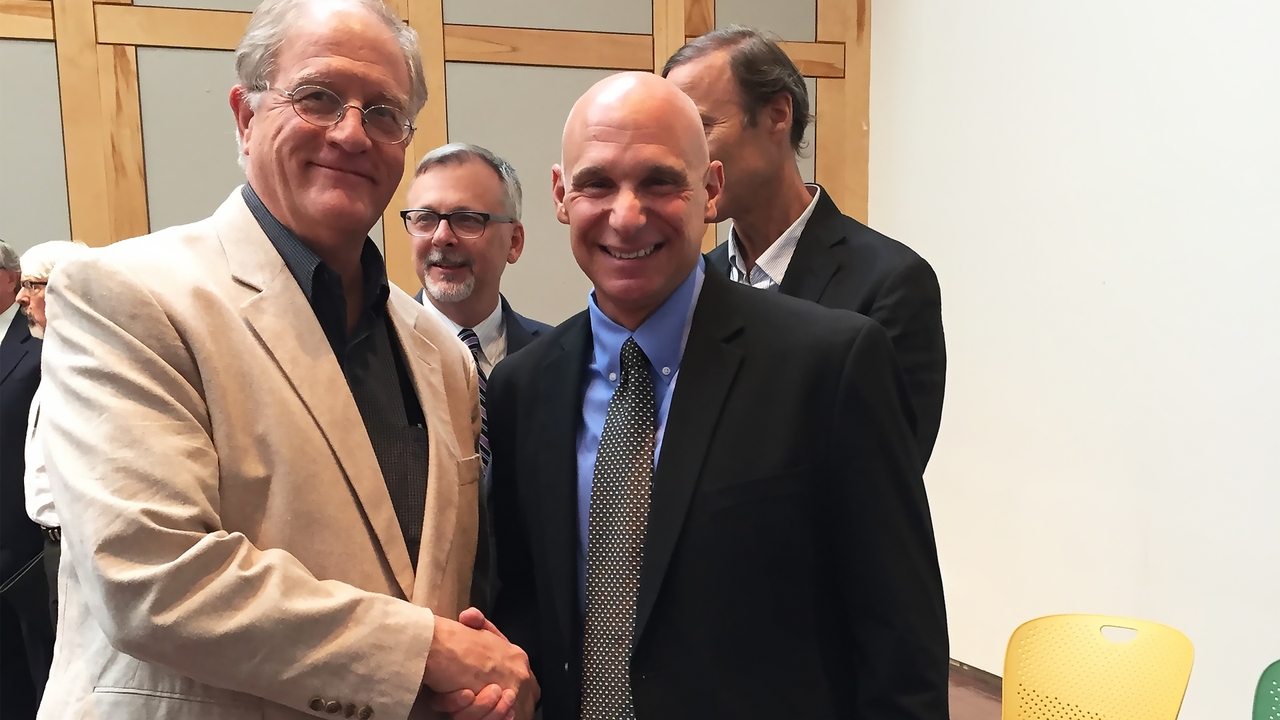 Archaeologist Robert Dello-Russo, Ph.D., has received the Individual Achievement Award from the State of New Mexico Historic Preservation Division, Department of Cultural Affairs. Dello-Russo, who is currently the director of the UNM Office of Contract Archeology, was recognized for his accomplishments in New Mexico archaeology and for his years of service to the state. He has been working professionally as an archaeologist in the Land of Enchantment since 1986.

While presenting the award, Matthew Bandy of the NM Cultural Properties Review Committee noted a few of the high-points of Dello-Russo’s career including the discovery of, and 10 years of research at, the Water Canyon Paleoindian site in west-central New Mexico; pioneering work using X-ray fluorescence at the Black Canyon prehistoric rhyolite quarry near Socorro; and excavations at the deep, multicomponent Lemitar Rock-shelter at the Sevilleta National Wildlife Refuge.

“What I appreciate most in my career is the continual reminder that archaeology is an interdisciplinary endeavor,” said Dello-Russo. “I have been repeatedly engaged with colleagues from a wide range of disciplines and it is their enthusiastic collaborations that have been invaluable to both me and the profession. The award I have received from the New Mexico Historic Preservation Division would not have been possible without their noteworthy contributions to my research.”

While deputy director at the Office of Archaeological Studies, Department of Cultural Affairs, Dello-Russo served as principal investigator at the discovery of the earliest known evidence for domesticated cotton (ca. 2600 years old) near Deming, NM. Prior to that time Dello-Russo also created the first archaeology program for the NM Department of Game and Fish.

Currently, Dello-Russo is at The University of New Mexico where he is a research associate professor and director of the Office of Contract Archeology (OCA), a division of the Maxwell Museum.

Dello-Russo’s long-term career in New Mexico has led to dozens of presentations to professional and avocational organizations and public groups, over 200 peer-reviewed and technical publications and, as principal investigator to over $4.9 million in research funding from grants, awards, contracts, and private donations.