In just two years, Matt Gines, director of the fabrications lab, UNM School of Architecture and Planning, turned the 900 square foot lab into a 4,000 square foot facility with indoor and outdoor spaces.

The fab lab now has a new name, CRAF+T, or Center for Research and Advanced Fabrication and Technology.

"We have the traditional wood and metalworking tools as well as the latest digital capabilities. You can't have either/or; you need both. The digital reads files, but trimming, cutting and sanding are also part of the process," Gines said.

The digital tools include two laser cutters; a 3-D printer; ABS plastic router – a tool that precision cuts ABS, a tough and impact resistant thermoplastic; and a three axis CNC router – a router that precisely follows the geometry of the programmed part.

Gines points to the machine in action. "It's cutting out a relief model of the Sandia Mountains in wood. It can cut 2-D or relief models in wood or aluminum. We can then take that model and put it in the vacuum molder to make a shell of it in plastic, kind of like formfitting packaging around a toy," he said.

He said that the lab is an internal resource, used by students and faculty in the school's three disciplines – architecture, landscape architecture and planning. It's also an external resource and service center.

"We started providing fee-based services in October. We did prototyping of a piece of medical equipment, providing 3-D prints for our client to show to his clients," Gines said. He said that any new product or patent idea is first explored through 3-D models to see the item from all sides and how moving parts operate.

He added that the lab also recently provided two models for the international firm Gensler Architects. "It took all day to produce them."

Gines and his students also created a template of a four foot by four foot model of a gun for a College of Fine Arts production. "We created a CAD file of it and cut out the shape for them." He said they are also collaborating with the School of Engineering.

He and his students are also looking to create new machines for use in the lab. "We're developing a machine that takes the router out of the process. We'd like to go straight to the vacuum molder, but we're struggling through that process," he said.

The revenue that the lab generates goes into buying more machines. If the lab produces enough revenue, Gines would like to open the lab into the space on the north side of the building where the bicycle racks are.

"I'd like to put more tables and metalworking out there," he said. If he had the lab of his dreams, Gines would like to have a robotics lab. To that end, he is applying for an National Science Foundation grant to develop robots for CNC plasma cutting and brick stacking. "They could be taken off site on a job. Only a few schools have them," he said.

Gines is looking to set pricing and determine costs of running the machines and paying his employees.
He recently sent one of his employees, Steve Mora, to McNeel, a software development company in Seattle, to train in Rhino 3-D manufacturing. Gines and Mora are now authorized trainers on the software and are willing to train UNM faculty, staff and students for free. "We can offer the training to the public for fee, as well." He said they are the only authorized trainers in the Southwest. CRAF+T is also listed on the Rhino network, meaning clients can find them.

Students are hungry to learn the tools, he said. "Interest keeps growing. They grew up with technology and they embrace it. Technology will always be in our lives." 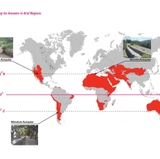 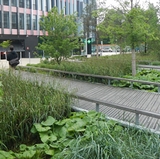