What happens when architects think about the world beyond its physical framework is the concept explored by a team of architecture students and a faculty member from The University of New Mexico School of Architecture & Planning. It earned them an honorable mention in Pamphlet Architecture 36 competition.

The publication, now in its 36th year, is an experimental architecture series presented in the format of a ‘Zine.’ A competitive submission process has been around for about the last 15 years. The series features architectural writers who have consistently challenged architecture’s conventional wisdom. The competition is open to professionals as well as students, who are charged to present their bold ideas in a visually provocative and intellectually compelling way.

Floating Cities
The project the participants had to address is “Buoyancy and Lift (Floating Cities).” Organizers requested visions of future architecture that took under consideration climate change – rising sea levels, displaced people as well as new technologies of solar power, ocean tidal power and solar desalination for fresh water. In response to rising sea levels, in the future, urban habitats could rise and float. 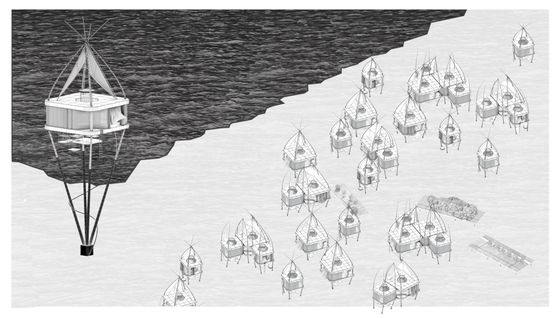 Floating prefabricated living units will be tethered by masts within the threatened shorelines of existing communities as a means to maintain habitation. As the waters rise the tethered modules can rise incrementally while still staying within the vicinity of the site. Inhabitants use the masts as a tuning instrument to adjust tension to balance oscillation and avoid motion sickness. The Units may float OR hover above the water. In times of inclement weather multiple units may be connected together for better stability and thus a new sense of community and neighborly customs evolve from the need for collective protection.

“This is the competition that up and comers tend to take part in,” said John Quale, director of the UNM architecture program. The UNM team fits that description, with Jared Winchester, part time faculty member and practicing architect, and graduate students, Matt Cooper and Farrokh Rostami Kia.

Winchester said, “There is a strong list of academic teams and emerging architecture firms we are listed among,” adding that one of the other entrants won the Harvard Graduate School of Design Wheelwright prize this year.

Cooper first heard about Pamphlet Architecture from Prof. Kramer Woodard, his studio teacher this past spring. “He made it clear that this was a prestigious and uncommon competition that carried with it a lot of the history of the past 30-plus years of architecture. When Jared Winchester asked me to participate with him on an entry I didn’t think twice, and working with him and Farrokh was inspiring and educational. To have received an honorable mention is gratifying, especially when looking at the others with whom we share the honor,” Cooper said.

Rostami Kia added, “I would like to express my feelings by saying how proud I am that I was able to be part of a motivated team that led us to such a precious honor.”

The competition intersects with a number of ongoing investigations Winchester has been exploring that study conditions of dynamic environments.

Living in a changing world
“Early in our discussions about this pamphlet, we affirmed that we would not use the trope of a post-apocalyptic scenario, instead envisioning the impetus of climate change as a generator of positive societal evolution. We imagined that inevitable near future when, by design or by disaster, our culture becomes ‘post-oil,’ and considered the myriad ways in which our built environment and our accepted social norms will be affected,” Cooper said.

“Geography is in constant flux with places like the Rio Grande serving as temporary anchors. We live within change, not in a static environment. We need to incorporate change dynamics, not view them as an impediment to life and progress,” Winchester said.

How architecture relates to climate change is critical, he said, because otherwise architects are merely creating in response to disaster when they need to address the potential for disaster into design. And with climate change, it’s a human crisis.

Territories of the Gulf State
The UNM team’s pamphlet is “Territories of the Gulf State,” and uses the premise of a “new collective space, forged through climate change, to interrogate the geographic, political, social, spatial and ultimately experiential dimensions of a world where the consequences of global warming are met through a radical reorientation of the patterns of human life.” 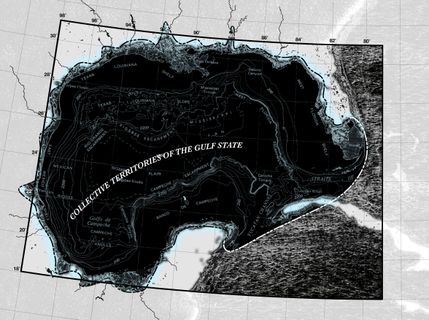 This conceptual map expresses the new identity of the gulf region as a collective territory linked through climate change. The boundaries of the Gulf State are based on a projected estimate of sea level rise over the next 100 years, which would literally redraw the shape of nations. In this scenario the project proposes these flooded shorelines adapt new forms of habitation and society.

They used the Gulf of Mexico as a test site of a restructured society after many of the effects of global warming have begun to happen. The team looked at what happens to the people and place of the Gulf respond to how much the sea rises over 100 or 200 years. “The concepts developed in the book submission do not focus simply on the duality of before and after, but the gradual creation of systems for maintaining occupation of coastal areas that adapt to the incremental in an ongoing process change over time.

Post-Oil Ecologies
Cooper said that his role in the project, outside several discussions with his team members about philosophical direction and editorial feedback, was the chapter, “Post-Oil Ecologies.”

He explains, “This addressed the vast, existing infrastructure in the Gulf of Mexico, i.e. the thousands of active and decommissioned oil rigs of different types that are clustered off the coastline, and ways in which this extensive built environment could accompany and facilitate an evolved culture. To quote the introduction to this chapter, ‘What new paradigm can exist here? How will the people of the Gulf State come to represent a more nuanced and more encompassing definition of progress? How can the existing infrastructure of thousands of oil platforms be reconceived as an armature upon which to form a new model of habitation?’”

Architecture as a Solution
“Providing a solution isn’t always hard. The right answer is the one that can provide a proper resolution while considering all possible aspects and values of the problem, which demands a major wisdom and contemplation. I’m really happy that we were able to provide such a design, program, and scheme that would value humanity, culture and history. I’m glad that we were able to respect and hold the bonds between the dwellers and their land and past while providing a new outlook to the future architecture,” Rostami Kia said.

The two Terra housing projects, are on the water and able to be hoisted above the water and tethered together in situations like a hurricane. “Tethering them reestablishes direct contact with the communities. They are what architecture could become if it is forecasting, not just fixing and assigning a physical framework,” Winchester said.

Skyline view of a chain of linked housing unit modules connected together to create a resilient community.

“There are currently a number of interesting companies exploring the logistics of water-based societies, such as the Seasteading Institute. While the engineering of these communities is very interesting, it seems as though these proposals still try to maintain the same type of private, suburban enclaves that are ubiquitous today.

What this competition stressed is the importance of changing how people experience and understand their relationship to the world in a fundamental way, and architecture should be the medium through which this redefined relationship is articulate,” Winchester said.