Tiffany N. Florvil, an assistant professor in the University of New Mexico’s Department of History, has been awarded the 2015 Dr. Richard M. Hunt Fellowship for the Study of German Politics, Society, and Culture.

Florvil received the honor for her book manuscript, Making a Movement: A History of Afro-Germans, Emotions, and Belonging.

“I am thrilled to receive this competitive fellowship,” said Florvil. “It is truly an honor that The American Council on Germany has recognized the potential of my work. I look forward to using the fellowship to pursue additional archival research for my manuscript in the summer of 2016.”

Florvil’s research in Making a Movement provides the first comprehensive account of the Afro-German movement of the 1980s and 1990s, a critical time period that saw the reunification of East and West Germany, as well as an increased xenophobia by Germans toward alleged “foreigners,” including non-white German citizens. It was under those circumstances that Afro-Germans insisted on recognition in West and reunified Germany while also attending to social, political, and cultural differences among themselves. 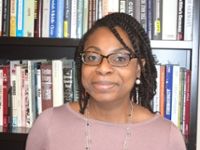 “My research constitutes a part of the growing subfield of Black German Studies. In contributing to this field, my work helps to undermine the notion of Germany as a homogeneous, monocultural nation by opening up perspectives on the constructedness of racial categories, the dynamics of exclusion, and demands for full belonging,” Florvil explained. “By doing so, my work also emphasizes the varieties of ‘Germanness’ as well as the diversity of Afro-diasporic experiences.”

The Dr. Richard M. Hunt Fellowship for the Study of German Politics, Society, and Culture was established in 2003 to support American researchers studying contemporary German society and the political, cultural, and social history of Germany. The award covers the cost of preapproved international travel and provides a daily stipend of $200 for up to nearly a month in Germany.

“In June, I will travel to back to Berlin to conduct research at the Free University Archives. There, I will examine the private collections of Afro-German activist May Ayim and Caribbean-American feminist poet Audre Lorde. Ayim was a critical figure in the movement, and Lorde served as an ally and a model for Afro-German activists and writers within the movement.  Indeed, this additional research will help me complete revisions on chapters 1 and 3 of my manuscript,” she said.

Florvil came to UNM’s history department in 2013 after receiving her Ph.D. from the University of South Carolina, where she was a distinguished graduate scholar. Her areas of interest include race and ethnicity, gender, identity formation, and social and cultural movements in 20th-century Europe. She currently teaches both undergraduate and graduate courses. She also serves as the coordinator of the History Department’s Colloquium Series.