After a nationwide search, Luis Campos, associate professor of the history of science at The University of New Mexico, has been selected to serve as the next Baruch S. Blumberg NASA/Library of Congress Chair in Astrobiology at the Library of Congress in Washington D.C.

According to a Library of Congress news release, Campos will take up his position at the Library’s John W. Kluge Center starting Oct. 1, 2016. During his year-long residency, funded by NASA, he will be engaged in full-time research in the Library’s vast collection of manuscripts, journals, papers and other documents, in the company of a small number of other top scholars and researchers.

As a historian of biology whose work connects discoveries in dusty archives with fieldwork at the cutting-edge of genetics and society, Campos can’t wait to get started. He says he plans to spend the year “exploring the historical and emerging contemporary connections between two of today’s most compelling fields of research in the contemporary life sciences: synthetic biology and astrobiology.”

While synthetic biology is a form of biotechnology interested in engineering new forms of life for human benefit, Campos says, astrobiology is about discovering new forms of life elsewhere in the universe. But “both synthetic biology and astrobiology are fields deeply concerned with developing a comprehensive understanding of the full potential of living systems,” he said. “If we really want to understand ‘life as it could be,’ we need to better understand how invention and discovery are connected.” 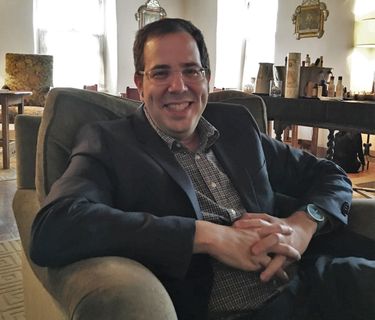 UNM Associate Professor of the history of science

Campos hopes to use the Library’s resources to complete a book on the history of synthetic biology, including its connections to astrobiology. Recently, he says the Library of Congress received a donation of the collected papers and correspondence of Carl Sagan, one of the founding figures in the field of astrobiology who did a lot to develop popular interest in the question of the origin, evolution, and distribution of life beyond the Earth through his famous television show, “Cosmos.” Campos believes his upcoming analysis of Sagan’s papers will yield a tremendous amount of valuable information about how astrobiology came to be a current priority for NASA.

“It’s a huge collection—over 1,700 boxes with a half-million items that’ve just been made and available, and are waiting to be explored,” he said during a recent interview at UNM. “For somebody looking to make the most of the resources of the Library, having this brand-new collection from one of the premiere people in the field available for research is kind of a dream opportunity.”

Campos received his Ph.D. in the history of science from Harvard University in 2006 and began teaching at UNM in 2012, where he is a senior fellow at the Robert Wood Johnson Foundation Center for Health Policy. He is the author of Radium and the Secret of Life, Secretary-Elect of the History of Science Society, and has appeared on the Travel Channel, Discovery Channel and PBS.

Along with his own research on “Life as It Could Be,” Campos says he’s excited to bring new discoveries back to UNM to share with his students and emerging historians.

“It’s exciting detective work,” he said, “digging in, making previously unknown connections, and putting the story all together. Many of the items in the collection, like handwritten letters and notes are unique, unpublished, and contain information that simply can’t be found elsewhere. It’s exciting when you come across unknown documents that can give you new insights into something. It’s that sense of encountering and reconstructing the past that really brings history alive for my students,” he says, “and I’m looking forward to bringing some of those discoveries and that excitement back home.”

According to the Library of Congress news release, the astrobiology chair at the Kluge Center is the result of a collaboration between NASA and the Library. It’s named for Baruch "Barry" Blumberg, Nobel laureate and founding director of the NASA Astrobiology Institute. Funded by NASA, and executed by the Kluge Center in consultation with the NASA Astrobiology Institute, the chairholder conducts research at the intersection of the science of astrobiology and its humanistic and societal implications.

The mission of the Kluge Center is to bring together “a small number of top scholars and researchers into periods of residence at the Library to stimulate and energize one another, to distill wisdom from the Library’s rich resources, and to interact with policymakers and the public.”