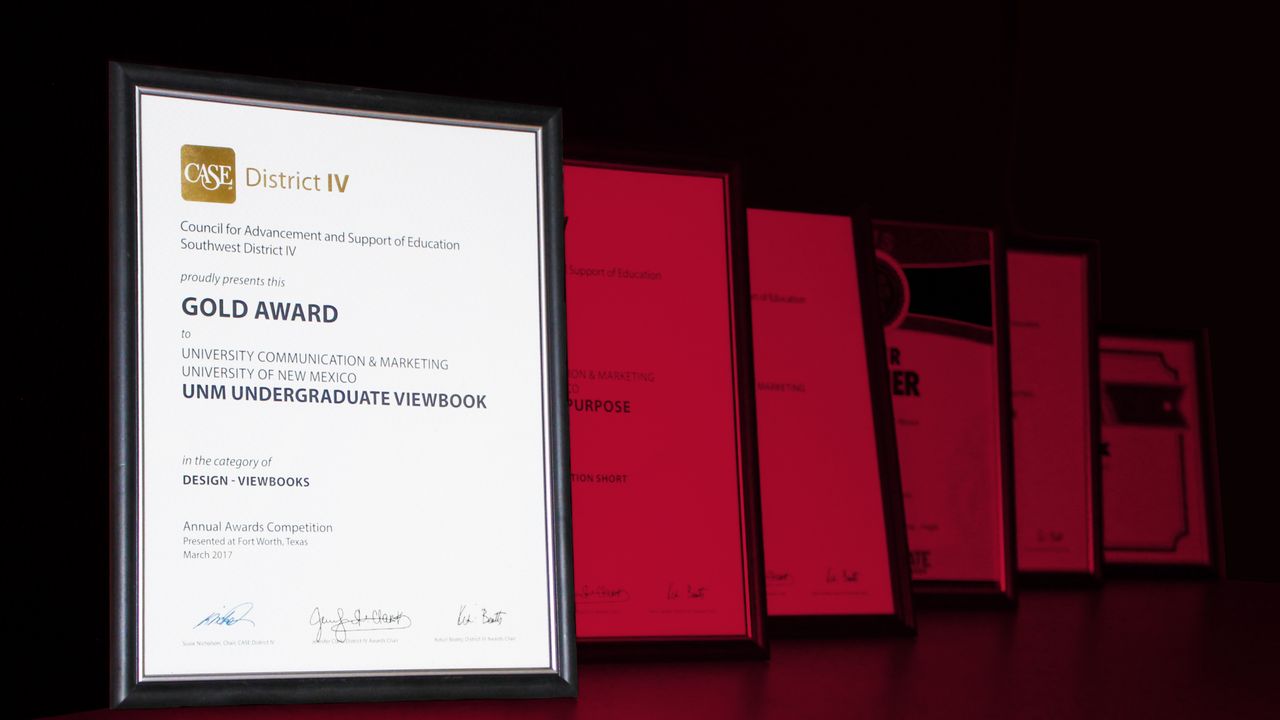 The University Communication and Marketing (UCAM) team was recently recognized by the Council for Advancement and Support of Education (CASE) and given four district awards for marketing videos and design – the latest in a string of awards UCAM has brought to UNM in the last few months.

UCAM works to showcase UNM’s extraordinary accomplishments on the staff, student and faculty levels. The department is also charged with building national and international awareness of the university, as evident in a recent grant-funded marketing overhaul.

“The success of the Brand Strategy Initiative is a testament to the UCAM team, a great partnership with our branding agency 160over90 and the wide-based support from the UNM community,” said Cinnamon Blair, chief marketing and communications officer. “From writing and design to video and web communications, we have a highly innovative team that is dedicated to showcasing the talents, passions and inspiring stories found across UNM. These awards reflect the quality and creativity of this work.”

In September of 2015, The University of New Mexico began working to enhance the institution’s brand and increase global awareness of its offerings. The “Define UNM” marketing initiative, led by UCAM, resulted in several publications that garnered awards. One, the new UNM Viewbook, is a three-part publication that gives prospective students a comprehensive look at all UNM has to offer and won awards from three separate national groups.

A second piece of the new marketing campaign, the “Unexpected on Purpose” advertising video brought home six awards – four of which were gold, the highest recognized category. It was also named Video of the Year by the Kira Awards, chosen completely by industry volunteers. Other schools on the finalist list included York University, Babson College and the University of Phoenix.

In addition, the video produced by UCAM featuring the “Silent Lights” disco was given four awards; and the redesigned UNM website was honored by the Educational Advertising Awards.